(I hope I posted this on the right forum.)

I took everyone’s advice and am going to hire professionals to design my book covers.

I have someone working on a cover for my book China vs USA right now. He submitted several proposals and asked me to choose my favorite. He said it’s OK to post them on an online forum and solicit other people’s opinions.

I have two favorites, but I won’t comment on them yet. My artistic tastes don’t seem to match anyone else’s. 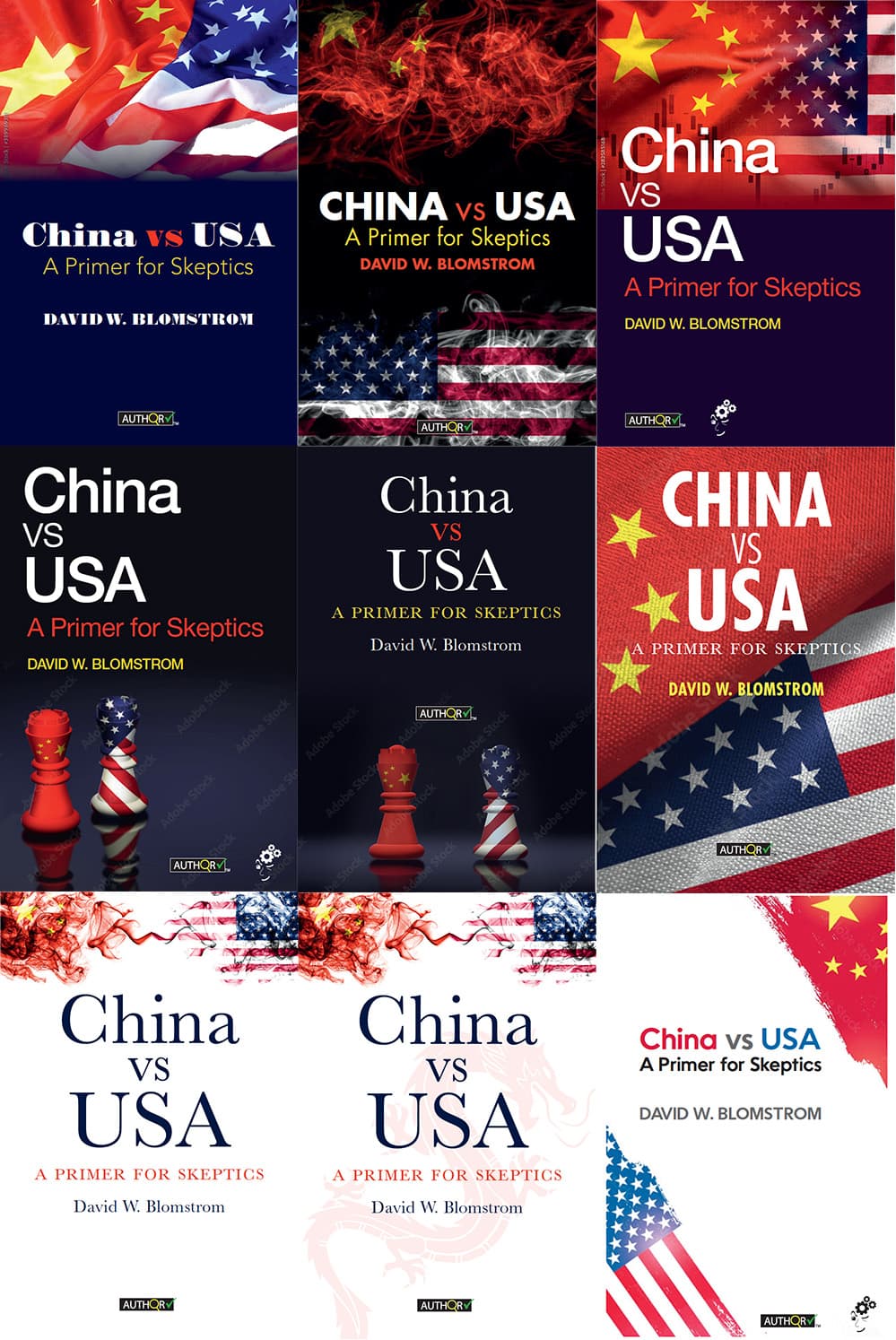 Could you please separate the different covers for better viewing?

Sure. Give me a couple minutes…

Sorry, I edited my post, but it seems to have reverted to the original post. Let me try this… 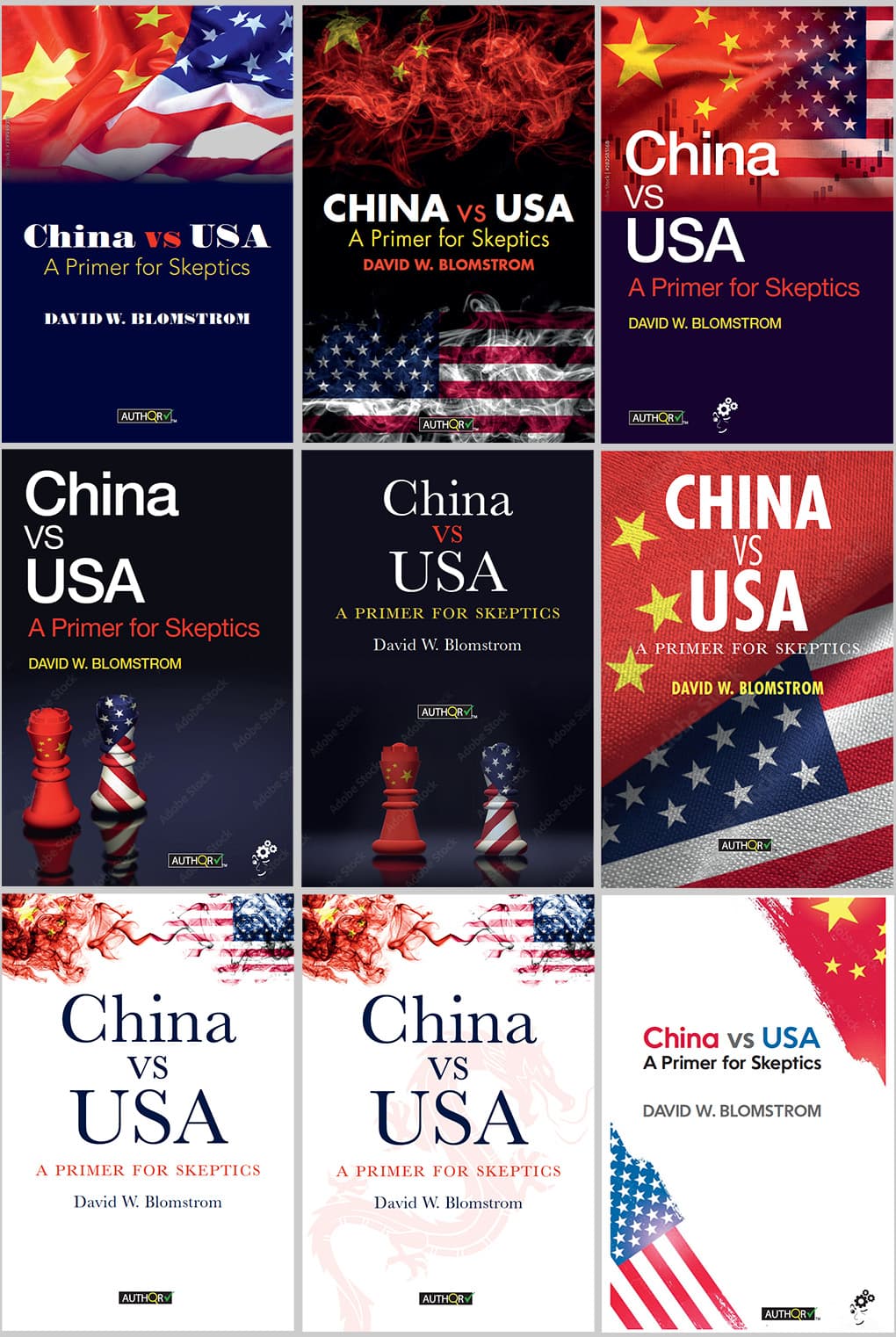 The forum rules prohibit critiquing other people’s work, but if you asked the designer and he is OK with it, I suppose we can make an exception.

I have two favorites, but I won’t comment on them yet. My artistic tastes don’t seem to match anyone else’s.

Keep in mind that even though it’s your book, the cover is designed to appeal to the target audience. Try to place yourself in their heads and try to imagine which one most of them would respond to and which best represents the content of your book.

They’re all pretty nice, however. The bottom-left two have something of a higher-end look to them, but the chess pieces are a nice idea too. If it were me, I’d avoid the middle top one unless your book predicts a war, which I certainly hope never happens. The bottom-right book is my least favorite, though, at least from an aesthetic angle.

These are nice. I think you made a good decision hiring a designer. I think you’ll find whichever one you choose to be effective.

The bottom right one is my least favorite, too. I posted this picture on a Facebook group, also, and everyone has a different favorite so far. Maybe I’ll have to flip a coin.

There can be a thin line between a focus group and design by committee. The latter rarely, if ever, produces stellar work.

At first, I was turned off by the one with the barren white background, but something about it appealed to me. Maybe it was the authoritative title font.

I broke up the white background a bit by asking the artist to add a Chinese dragon. But a lot of people like the chess pieces, so I added them, too.

I also like the idea of adding a yellow circle (representing the sun). Maybe I’m headed towards overkill. If I have to choose between the dragon and the sun, I’d probably stick with the sun. 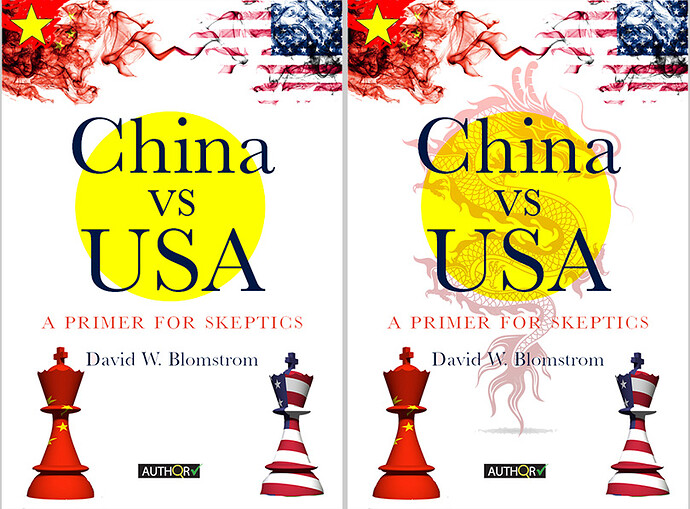 Far too many elements in there now. My favourite was middle row-right (with some placement and type tweaks) on the first set, with the two textured flags. Just-B is right, to my mind. The chess pieces are too adversarial (depending on the tenor and content of the text.

Overall though, if you try and shoehorn too many ideas or elements in, you weaken the message. These new ones are all over the place now with no focus or strength.

One more possibility - simply replace the flag art at the top with the chess pieces at the bottom. By the way, I’m thinking of paying the artist for two covers, using the one in the middle row, right on a related book - China Watch. 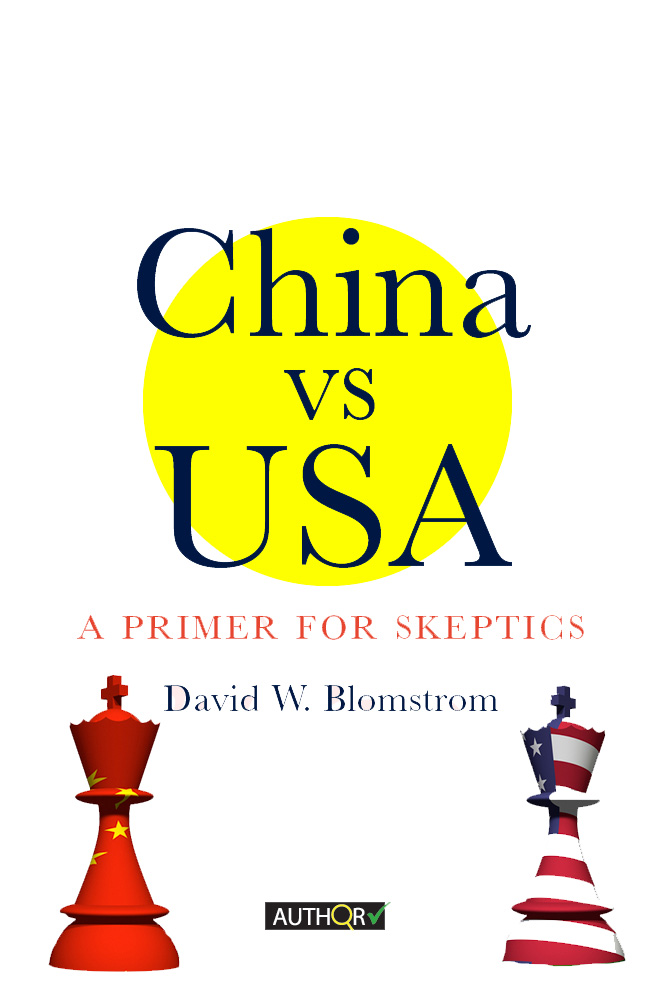 I like that one too. It’s probably the most neutral of the group and doesn’t imply confrontation or hostility as some others do. If it best matches your book’s tenor, I wouldn’t hesitate to use it.

I also like the idea of adding a yellow circle (representing the sun). Maybe I’m headed towards overkill.

Your additions are well past the point of overkill. Adding the dragon skewed the book toward China rather than the relationship between the two countries. Plopping two chess pieces into the corner is compositionally awful. It’s an attempt to cram one more seemingly good idea into the mix that isn’t visually harmonious with anything else. The circle is entirely superfluous. It’s nothing but a big, pointless yellow circle plopped into the middle of the layout for no obvious reason. Even though you mean it to represent the sun, it won’t come across that way to anyone without you explaining it to them.

I wouldn’t often be this blunt with a client, but I’ll give you my honest opinion since you’re not a client and you’ve previously asked for advice. For all I know, you’re a great writer with great ideas, but based on your visual ideas and those you’ve posted previously, you have no aptitude for design, and, worse still, you can’t see it. Please let the designer do what he does best. Please don’t ruin the cover of your book by tossing in a bunch of mismatched stuff or asking him to do it for you.

Good, modern design typically centers around simplicity and hierarchy, not clutter. Good design is more about subtraction than addition. Decorating one’s way out of a design problem rarely (if ever) works.

I don’t think any of them are particularly good.

Firstly I need to ask, what is the Author ™ symbol on all the covers???

First
Text too cramped, hard to read, flag superimposing is not good. The feather is awful. The navy background is terrible and boring.

Second
Why does the china flag look like it’s on fire?
The text treatment is awful, it’s better than the first. But it’s very boring.

Third
Just a take in the first. All the same issues except missing the awful feathering.
The flags are a bit better but on both they’re not evenly distributed.

2nd row
First
Chess pieces are a tired method of portraying strategy. It’s just overdone. Is it good or is it a bit lazy? It seems boring to me.
Unless the book is about the parallels of cheers between the two countries.
Or does it look like a bit too political.

Either way, I’ve no idea what the book is about. It’s a confusing image.

Second
This is probably the 2nd best of a bad bunch.
I’ve still no idea where the skepticism is in the book cover. It still looks like a war strategy or political strategy book. If that’s the goal then it’s achieved.
But it’s a confusing cover for the same reasons as above.

Third
I’d say if I had to to pick this one but tweak it.

Much better text treatment, however somehow managing to have white text go on to the white background and text too close to the star.
The flags are they positioned correctly, why is china above the USA flag, kinda gives china the upper hand being in top?

Third row
First
Again with this smoky flags… But huddled into the corners kinda reaching out to reach other.
Really bad placement.
Text looks ok, not great.
China looks smaller than USA. That’s why the middle right looks slightly better, all caps looks more even. But rather by fluke than any thinking in design as no other cover has this.

Text is too high up the cover. It’s not balanced vertically.

Second
If you’re going to add a dragon then add the bald eagle.
Same issues as the first on the same row.

Third
Again flags, the distribution looks off.
The text is not positioned correctly.

All in all from that grid they all scream the same problems with typography, image placement, image choice, text placement, and color choices.

Moving to the monstrous additions.

A yellow sun is incorrect for China. A red dot for Japan is correct, but doesn’t hold up for China. They’re flag is stars symbolizing communism.
A yellow dot means nothing

It should be more like red and white sun beams.

The choice of the yellow dot is just terrible.

Crammed in all the worst ideas, made a very confusing cover.

Too much going on.

I’ve no idea if it’s about
the countries going up in smoke.
Chess
Dragons/folklore

There are none of the covers that let me know what this book is about.

The flags are probably the best route.
But needs a lot more work and get them evenly distributed.
Work on the typography similar to middle right.

I wouldn’t even know who the target audience is on these. They’re just too generic.

I can give you my personal opinion at asethetic level, but I don’t think I’m your target audience (am a ridiculously slow reader, so almost never read books).

What kind of people do you expect will read it?

What kind of card are you printing the book cover on, will it be glossy or matte?

Where in the bookstore do you think you’d find this book?

How thick is the book (approximately)?

What is your books tenor?

I think they answered before in a other post. They are predominalty ebooks and not printed.

My favourite is the first one and the third one. Overall is the first one. The layout is good. And the colour combination is good too. But the typography is not very easy to read. seems that all the other 8 have better fonts. The 3rd one is good too.

Wow, thanks for the detailed critique.

I’m not sure if it’s even possible to design a cover that tells people exactly what the book is about. It obviously focuses on both China and the U.S., and I would hope most people would assume it has something to do with the trade war (bordering on Cold War) between the two countries.

But people are ultimately going to have to read the book’s description to really nail it. I don’t think it’s possible to communicate that with 100% clarity via a cover alone.

The Author TM symbol is a trademark I recently registered. It’s a symbol of author transparency that I want to use to distinguish my political books. I’m using it to call attention to the fact that 1) many (most?) readers don’t really bother researching authors, and 2) it doesn’t really matter, because many (most?) authors have amazingly little to say about themselves.

“What kind of people do you expect will read it?”

I’m primarily targeting people who don’t trust the government and the media and want to learn the truth about China (and the U.S.).

“What kind of card are you printing the book cover on, will it be glossy or matte?”

I haven’t got there yet.

I published the original version as an epub, then added a paperback version. I had to charge $30 for the paperback just to make a $2.50 profit.

In fact, I loathe paper books, largely because I hate wasting trees.

However, I’ve been advised that serious authors should have their books available in as many formats as possible. After I get it edited and get a new cover, if I decide to create a paperback again, I may change all the pictures to black-and-white to lower the cost.

“Where in the bookstore do you think you’d find this book?”

I doubt that it will ever be sold in bookstores. It will probably only be available on Amazon, Barnes & Noble, Kobo, etc.

“How thick is the book (approximately)?”

I’m also thinking of creating a second book, China Watch, that will be published annually. It will be a review of significant events and major events that occurred during the preceding year. So China Watch 2023 would be published in January 2024 and would be sort of like a 2023 yearbook.

Sorry, I don’t know what you mean by “tenor.”