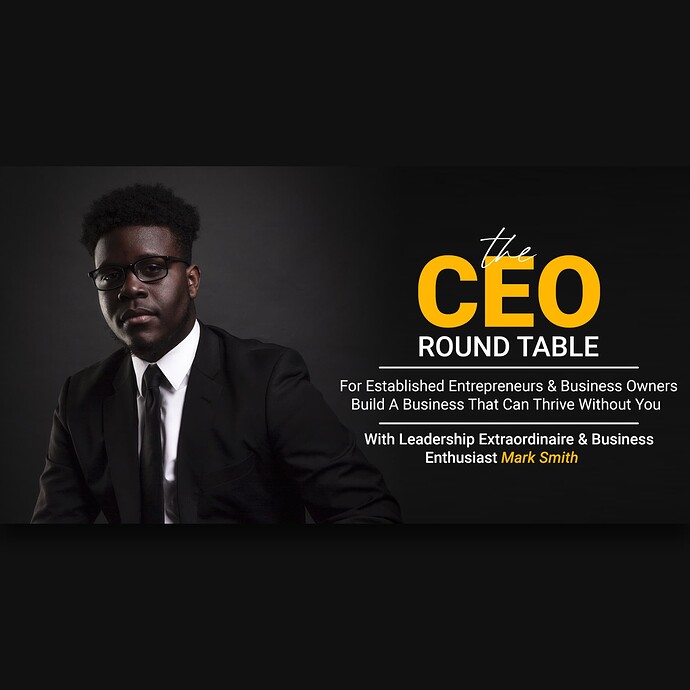 Can’t read the text. Too much info and it’s too small. Needs to be impactful, short, precise, memorable.

In short, it’s a shambles.

There’s nothing wrong with negative space, but here, you’ve just filled the empty space on both the top and the bottom with black bars, which is essentially wasted space that you could have used to make both the man’s photo and the description more prominent, larger, and complete.

What is “The CEO Round Table?” There’s no link, no dates, no times, and no locations. The blurb of text between the two lines makes no sense. Is it a single sentence or two separate sentences?

Who is the man in the photo? Is he Mark Smith?

The entire purpose of graphic design is to help communicate ideas to other people. This ad communicates very little. The message is incomplete and there’s no call to action of any kind.

If I can say something positive, it looks sort of nice, but that’s really not the main point if the ad is trying to sell or communicate something. Attractiveness will get people people’s attention for a second or two, but when there isn’t insufficient depth or follow-though in the message, the ad won’t accomplish what it was meant to do. You need to give people a reason to click on the ad.

it looks sort of nice

Can the praise be any fainter?

you’ve just filled the empty space on both the top and the bottom with black bars,

I have nothing else to add … it’s all been said

Ok, sure, I will improve those sections . Thanks a lot for your tips.

That black space is not including that design.You can say I mockup it like this.
Those black bar is like background , main design is banner.The man in this photo is unknown to me , I indicate him as Mark Smith.

I will really work on Call to action section of graphic design.Thanks a lot for your such a valuable feedback

Your thoughts on top.

Plus your line endings are terrible

Thank you so much

… and I’d swap the ampersand for an ‘and’ in this case. These are not listed items and are part of a normal sentence. It can be used like this in informal writing (I’d still balk though), of course, but should only really be used with listed items, such as Horse & Jockey, in a pub name. Stars & Stripes, etc. As this is not intended to be informal and aimed at educated, intelligent people, it gives off the wrong signals. Looks sloppy and informal which detracts from the credibility of the event.

Thanks for your feedback.

Yes, I see what you mean, I was on the fence, but it was listed as two items, so I was willing to let it slide.