Combination of Adobe and Figma Will Usher in New Era of Collaborative Creativity Today, Adobe (Nasdaq:ADBE) announced it has entered into a definitive merger agreement to acquire Figma, a leading web-first collaborative design platform, for...

I was afraid this would happen. Adobe, like Microsoft, has a long history of neutering their competitors by buying them before they get too large. I fully suspect that Adobe has offered Serif big piles of cash to acquire Affinity.

Personally, I see Adobe as violating U.S. anti-trust laws by engaging in monopolistic business practices that warrant the company being forcibly broken up into smaller entities.

They’ve a long history of buying out competitors.

It’s an online collaborative tool - so I guess they want to get more into that space of online teams and integrate that into the ecosystem.

I guess they want to get more into that space of online teams and integrate that into the ecosystem.

Figma is a direct competitor with and similar to Adobe’s XD. If I had to guess, they’ll cannibalize the company, then keep whichever brand — Figma or XD — that they see as the strongest while sidelining the other.

In the Macromedia merger, when two similar products existed in the same space, they eventually did away with one of them. I’d be willing to wager that within the next year, it will become obvious which of the two products will survive.

This doesn’t bode well for the consumer benefits that emerge from competition. 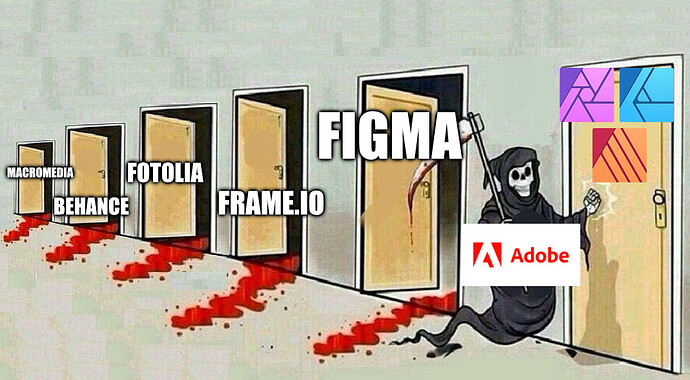 Not soon I guess with having spent $20 billion for Figma and these financial figures Adobe Inc. - Wikipedia Plus it seems like they are more interested in UX and Screen etc than Print. Affinity imho leans more towards Print with Publisher/StudioLink in the center.

Yeah, probably, but I’m not sure the corporate Adobe culture has ever really understood design that doesn’t involve print.

Supposedly, they bought Macromedia to acquire Flash, Director, Shockwave, and Dreamweaver. Once Adobe got them, the spark was gone and each declined through a lack of innovation and failure to keep up with industry changes. Adobe’s own in-house attempts to innovate in a non-print world have largely failed. Even Premiere, which is a success, played 2nd fiddle to Apple’s Final Cut until Apple decided to change directions.

My guess is that the innovation and foresight driving Figma will soon be overwhelmed and quashed inside Adobe’s bureaucracy.