For those wanting to try the Affinity apps (Designer, Photo, Publisher), Affinity just announced they’re available for half price at $24.99 each. There’s also a 90-day trial period.

I’ve been using the Affinity apps for about the past year on several of my projects — including a few large ones. They lack the bells and whistles of Illustrator, Photoshop and InDesign, but all the basics are there in a slick interface — even a few that I wish Adobe would implement.

At this point, I’m not ready to give up my subscription to Adobe CC, but given Affinity’s policy of no monthly subscription fees, the low initial cost and how fast these apps are maturing, they’re definitely worth checking into.

For what it’s worth, I have no relationship to Affinity — just a sometimes-user of their software.

From the smoothest, fastest photo editing and graphic design software to the most powerful publishing software, Affinity apps are pushing the boundaries of what’s possible with creative technology.

When you say they lack some of the bells and whistles, do you ever run into a situation where you can’t do (or can’t easily do) something that you could do with the Adobe equivalent?

I think you meant InDesign maybe? Not Publisher? It’s very unfortunate that Affinity called their InD-like design software that particular name. Conjurs up the shudders of the Microsoft nightmare.

I suppose it depends on what one is trying to do or whether a lesser-used feature in one of the Adobe apps is essential for a particular job or a particular person’s way of working.

For me, probably 90% of the features I depend on are there in one form or another. For the remaining 10%, there are workarounds or other, more awkward ways of doing the same thing. Then there are the things that people don’t know they need until they use them a few times and wonder why Adobe hasn’t done something similar.

Just three random pro and con examples out of dozens.

I find InDesign’s packaging feature to be extremely useful. It sorts through all the unused stuff, collects all the images and fonts and bundles them up into nice, neat, self-contained folders for archiving or sending to clients or printers. Affinity Publisher does not have this feature. It will gather up all the images and place them in one location, but not the font files. Unless it’s done just right, all the linked paths to the new images are lost and need to be tediously relinked. InDesign never has this problem.

On the other hand, both Publisher and Designer will open up PDF files — almost as though they’re native Affinity files. I can’t count how many times people have sent me PDF and asked for various changes to be made to them, which was never what Adobe intended for PDF to be. PDF is an end-file format, not a working format, so I understand Adobe’s reluctance to develop tools that let people start using it as more than that. Even so, people still send PDFs, want changes made to them, which turns into a huge, time-killer with no good workarounds. With Affinity, most PDFs can just be opened up and worked on, which violates the whole original point of a PDF, but can still save a ton of time in a pinch.

The Affinity Suite apps have a feature called Personas, which Adobe software does not have. If you’re working in Publisher, for example, and need to edit an image, you can switch to the Photo or Designer personas and work directly on them without leaving Publisher.

I think you meant InDesign maybe?

Yes, you’re right. Thanks. I fixed it.

I never could figure out why they chose Publisher as the name of their layout application. Given that Microsoft had already used the same name for their do-it-yourselfer layout software, it makes no sense. I’m not even sure why their attorneys allowed it given the chance of a lawsuit from MIcrosoft.

The Affinity Suite apps have a feature called Personas

As soon as you use it, it feels like it’s the way it should be done and that opening different bits of software to do different things suddenly seems archaic. Same window and the menus change. Brilliant. Love it.

Does the photo app have all of the layer / blending modes / mask functionality that Photoshop has?

Does the photo app have all of the layer / blending modes / mask functionality that Photoshop has?

Yes, with just enough differences to be confusing at first. There’s a separate menu item for layers, plus a layers palette similar to Photoshop’s. Screen captures below. 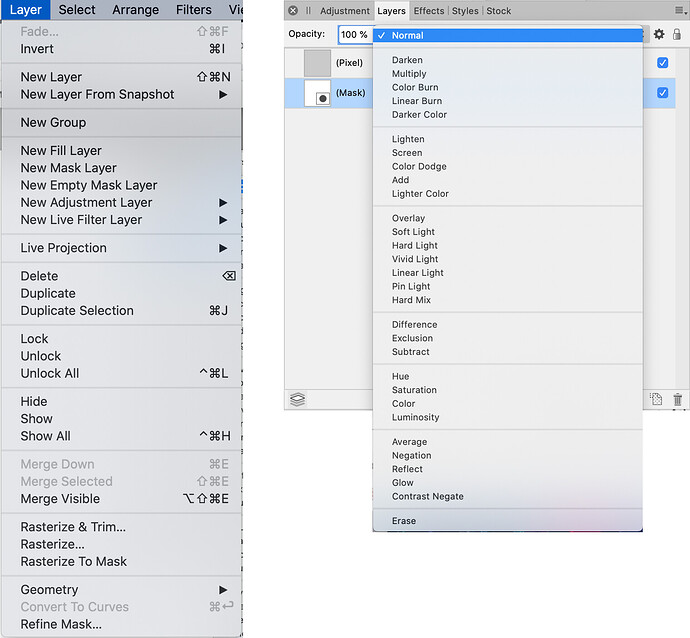