Hi, I am a graphic designer with 12 years experience designing mostly marketing material for clients as well as logo’s.

I am considering moving into designing artwork for album covers but wanted to ask if this is still relevant as most music is digitally streamed. I know there has to be artwork for this regardless but not sure if the demand for this is high.

How would I get into this field? I work freelance but ideally would like to work for a company that specialises in album artwork.

Any type of band that has a label, you would have to (probably) contract with the label to do this kind of work. All the other stuff is more on the Indie scene. Near as I can tell, most of those have friends and nephews that do that kind of stuff for them (or even someone already in the band, LOL! At least that how most of the indies I follow go about it.)

If you are already in marketing, set something up where you also do collateral for touring or local gigs. They don’t just need album art. They might want gig posters, handouts, website, social media, and maybe even a t-shirt or two.

During the pandemic, a thing happened similar to Zoom Rooms, where one artist will perform with a backing track composed digitally. Just one guy or girl, rockin to a camera, sometimes in their den, sometimes with something a little more decorated. Or in a couple cases, an entire band performing online. So maybe they need Twitch work or Indigogo promos or that kind of thing.

Forgive me if I’m not much help, but questions like this always puzzle me a bit. Maybe it’s different where you are in the world, but during my freelance career here in the Northeastern US, it never seems like the profession was divided up into applications like that. If I landed a client that needed an album cover designed, I’d design their album cover. A week later, maybe I’d be designing safety signage for a factory, and the following month, web ads for a travel agency.

Here on the forum, there are frequent posts that talk of being “a logo designer,” or like your question; “how can I get into this area or that?” My prospective-client-work landscape just never looked like that.

Demand for album cover artwork? I don’t know. Maybe in, Philadelphia, PA for example, there could be a dozen musicians looking for album cover designs this week, and 3 weeks from now, there may be none…or 9 dozen. I suppose there could be pockets of ongoing demand that would support one or several specialists, but I’d have no idea how to find them.

What HB said too. Finding this work isn’t a niche you specialize in.

UpWork has people looking for album cover designers. However, the pay isn’t especially good, nor are the clients. Record labels aren’t advertising for designers on Upwork — just small indie bands looking for help with whatever less-than-great idea they have in mind. On the other hand, it’s a start if you want to try your hand at it.

For example, here’s a screen capture of the first one that came up when I looked. Notice the number of people who’ve applied — somewhere between 20–50. Seems everyone wants to design album covers.

By the way, Upwork isn’t a contest site. You have to be chosen to do the job based on your portfolio, experience, and bid. 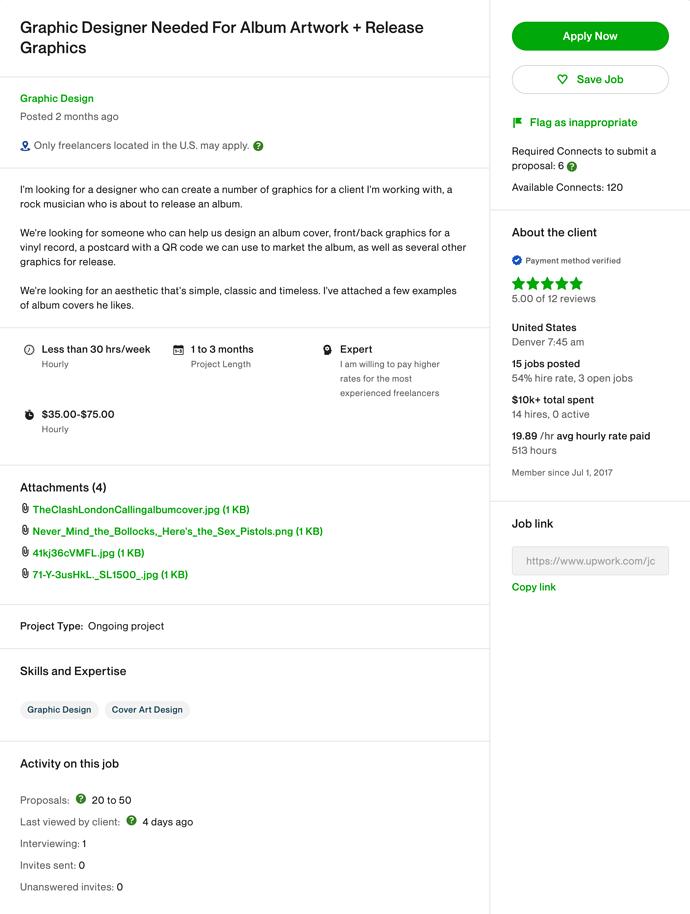 Look at any entry in the “Graphic Designer CD Cover Game”.