For years, I’ve been dismissing the notion of photo sharpening and enhancement apps doing much more than sharpening edges, reducing noise, and that sort of thing.

A friend recently showed me an app, Remini, that uses artificial intelligence to add detail into the photo that isn’t in the original. It analyzes the image, identifies areas of the image similar to what it’s encountered before, then creates an approximation of what it thinks should be there.

I grabbed an old photo of my polygamist great-grandmother (a weird subject for another day) from the 1800s, then ran it through Remini’s online tryout. Here’s the before and after. 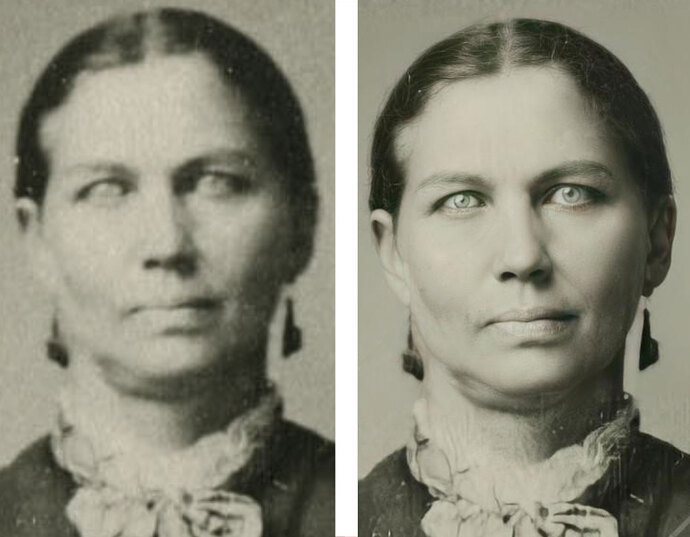 Not knowing exactly what my great-grandmother looked like, I wondered how accurate Remini’s guesses were, so I grabbed a free photo from Pexels. The first photo below is the original. The second photo is the result of a gaussian blur that I applied. The third photo is Remini’s attempt to recreate what it thought the blurry photo must have initially looked like.

It’s pretty amazing, but I have mixed feelings about it. The AI algorithms apparently focus on facial details and hair. The algorithms ignore or mangle hands, clothing, or background details.

On photos where honest integrity is important, such as historical photos, the AI enhancements seem inappropriate since they create an illusory approximation of a reality that never really existed. However, for lots of graphic design work, where that isn’t critical, this kind of thing holds lots of promise down the road.

I put in an old photo of my Great-Great Grandmother. It wasn’t a bad photo to start … but the dress was a bit blurry. The dress is still a bit blurry but it crisped up the line of her face and eye sockets. Not terribly different from the first one. I was going to try to save it and I got an error … tried again and error again … I give up lol

I didn’t try to save any. I only made screen captures.

Here’s another example of what it did with a blurry photo I found on the web. I have no idea how accurate the recreation is since I don’t know what the original looked like.

I also tried enhancing a low-resolution file that I had upsampled in Photoshop, but the results weren’t nearly as good. It seems to do best using straight-on headshots of old or blurry photos. I suspect the AI software is optimized for doing just that. 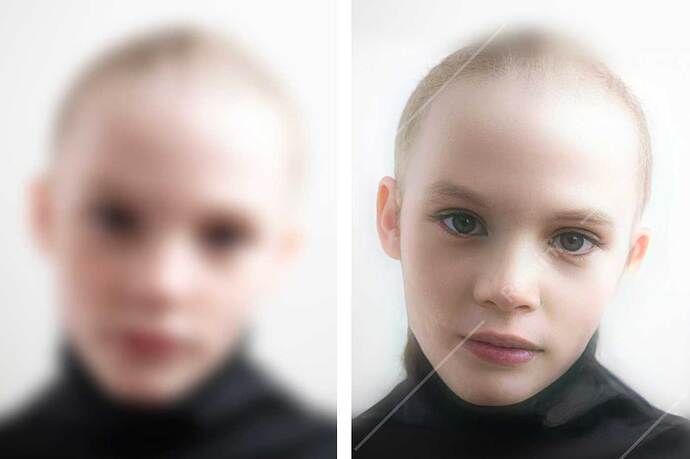 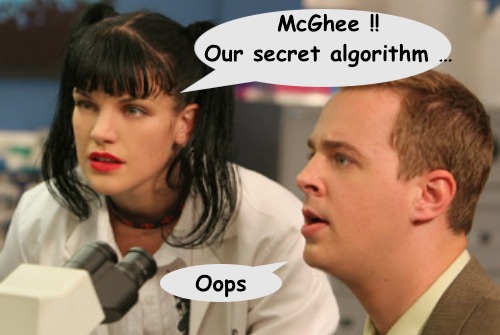 I finally got it to work without crashing

I did a little experiment. I used a photo that I knew exactly what the subject looked like. I frogged around with it to “dirty” it up a bit. Then ran it through.

It did a pretty good job with the face. They eye color is slightly off and the smile is slightly bigger. But over all I’m sure everyone would know that was Betty White. It didn’t touch any other part of the photo.

Based on that I’m sure this was created to be a facial recognition tool only.

Just my thoughts of course

What I find interesting about this is not so much what AI is capable of today but what it will be able to do several years down the road.

I can envision realistic movies made using nearly flawless simulations of long-dead actors. Or more relevant to graphic design, online services that create almost any photo or video one needs in just a few seconds. For example, need a zebra eating ice cream while riding a merry-go-round, fine, click a few buttons, pick a zebra and merry-go-round, and the imagery is built and downloaded within seconds.

I’m not saying this is a good thing. It opens the door to all kinds of not-so-good uses. Even so, it’s pretty amazing.

Agreed … I think they are just getting started.

But, now I really want to see a Zebra eating ice cream while riding a merry-go-round

Just-B, concerning movies with long dead actors, if I’m not mistaken, the majority of the scenes of Princess Leia in the last couple of Star Wars flicks were pretty darn good already.

I ran it on a bunch of family photos that had varying degrees of focus. The improved clarity on all of them is a revelation, but in most cases it also made the person slightly unfamiliar. Definitely not images I would hang on to. I could see the conversation in the future being “is this the real photo or the computer photo?”

They cost a fortune and are very labor-intensive, though. Similarly, it’s possible today to create, as in my example, a zebra riding a merry-go-round, but it wouldn’t be a trivial task and probably not worth the time and expense.

AI will change that. Instead of special effects people spending weeks on a scene needing an actor from decades past, a substitute actor could play the part with the desired actor’s image mapped onto the substitute. The AI software would handle all the details of making it look and sound totally authentic. For that matter, a realistic live-action feature film could be economically feasible with completely synthesized actors that would be impossible to distinguish from real people.

a realistic live-action feature film could be economically feasible with completely synthesized actors that would be impossible to distinguish from real people.

Ahhhh … to be a young animator again with today’s technology! (Remenissing)

They aren’t that far off now. The modern Marvel movies are a pretty good example of what they are capable of today, compared to, say the 2009 movie Avatar that was one of the earlier character mapping movies using humans in node harnesses.

I have no doubt Tom Cruise has been fully digitized in every possible way and will be starring in Mission Impossible movies for decades after his death.

Wow! Thanks for sharing. (Dying to know about the polygamist great-grandmother though. She looks kinda proud of herself, maybe she had good reason.

Back to the app, any idea what the pricing is?

On left is an old photo of a buddy of mine. Another buddy, who works for CSI Orangeville, allowed me to process it on her app, “SherlockClone 1.2”, and the result is on the right.

She said you can have a copy for 500 grands, payable to the Eriskay Benevolent Fund.

Dying to know about the polygamist great-grandmother though

They were Mormon polygamists. Here’s a photo of my great-grandfather Doc Draper and his three wives. Between them, they had 32 children. The house must have been like a zoo. 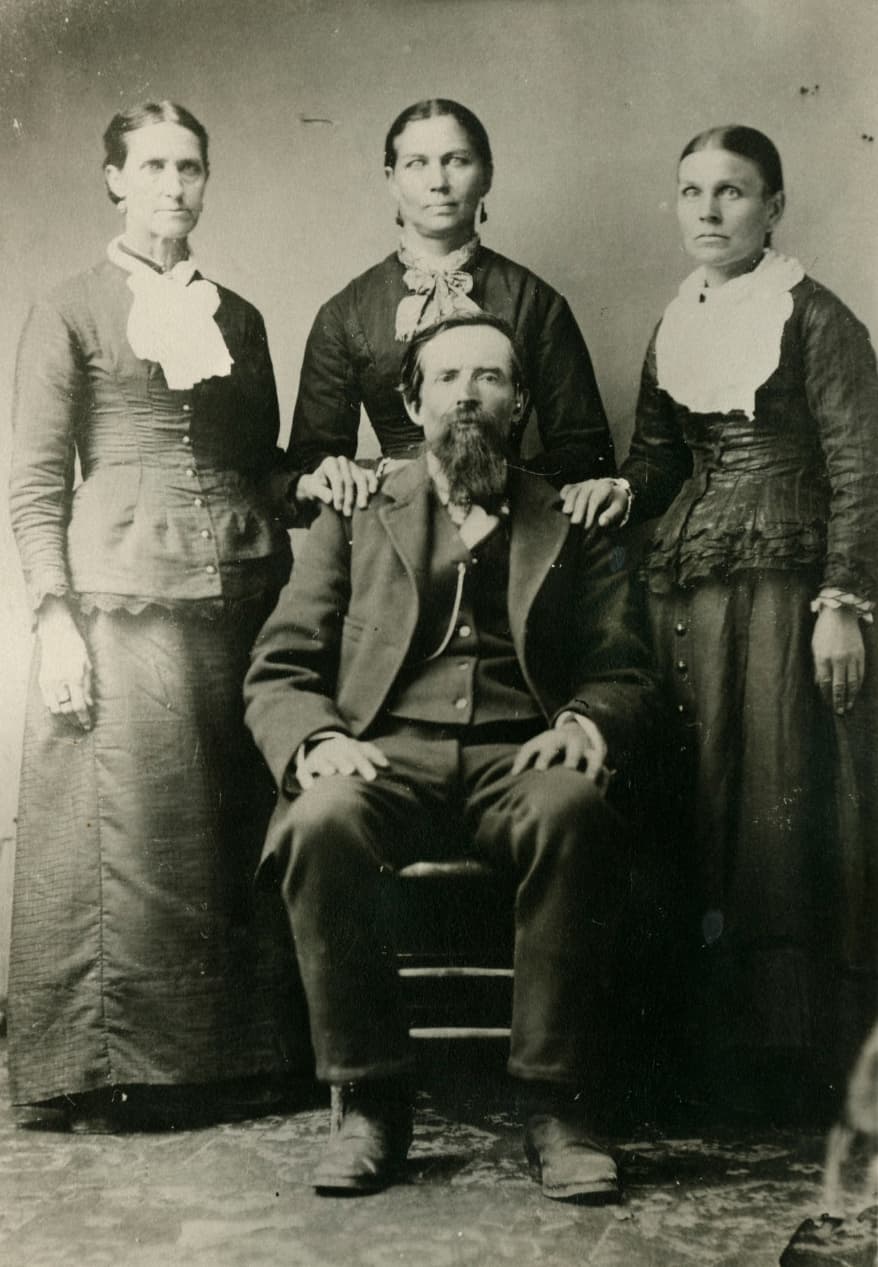