This is more of a vent than an actual question…
Do you ever get a client who makes so many changes to your work, you want to ask them why they even bothered hiring a designer?
Yes, some changes are valid and add to the end product … but not when it looks like it was made in word by the time all is said and done.

You know what happens when a client requests changes down to the minute detail? It looks like a non-designer made it. Because they did.

Sure, you can keep nodding and taking their money, but there’s no pride in it.

So, got any stories, thoughts, or condolences about backseat designers?

My record was iteration 35. I was the in-house designer, so extra billing was out of the question, although I’m sure as it was it’s still not earth shattering.

Outside of that, my contract stipulates the quoted fee includes three rounds of alteration. Anything exceeding that is billable.

“Pride”? What has it to do with the business of graphic design?

My record was iteration 35

and how annoyed were you?

“Pride”? What has it to do with the business of graphic design?
I can’t tell if you’re joking or not

Do you ever get a client who makes so many changes to your work, you want to ask them why they even bothered hiring a designer?

I think a lot of people don’t even know what a designer really does. They seem to think we’re just artsy people who have the software to build whatever bad ideas they’ve dreamed up.

It’s important to get input from clients to make sure the end goal of the project is clearly understood, but when they begin assuming I’m just a hired pair of hands to implement their ideas, I begin to lose my patience.

About a year ago, I got a call from an institute associated with a big university. The institute was set up to promote harmonious relationships with various cultures around the world, and they needed a logo for themselves.

They told me they wanted a circle to represent the world (like a globe) with all the continents and oceans on it. They also said they wanted the oceans constructed out of a word cloud using a set of words that they had already come up with. I explained that this would be a bad idea because of the complexity and legibility issues at small sizes.

Their response was for me to feel free to come up with something I felt would work better, which I did. When I showed them the work, they were unimpressed and after talking to them, they kept coming back to this awful word cloud logo they had in mind. I finally realized that this really was what they wanted, so I told them it would take several days for me to create it, to which their response was money didn’t really matter.

I was already 20 or 30 hours into this project, so I just decided to go along thinking I could somehow salvage it. Unfortunately, it just got worse as they got more and more picky about exactly how it should look, the colors they wanted, and the gradient they wanted to make it look more 3d. They also kept changing the words in the word cloud in an effort to be as politically correct as possible. It went on for days while they tweaked, retweaked, changed their minds, went back and forth, and got other people involved — all of whom were trying to micromanage me.

The hours kept piling up. I kept telling them it was adding up to a very expensive logo. They told me not to worry about it. They finally decided it was perfect, so I sent them the final copy below. It was easily the most ill-conceived logo I’ve ever built. I got paid. They used it for a couple of months, then word got back to me that they were going to change it because it wasn’t working out for the very reasons I told them it wouldn’t.

Sometimes I think some clients go completely out of their way to spend money making sure the job turns out as poorly as possible. 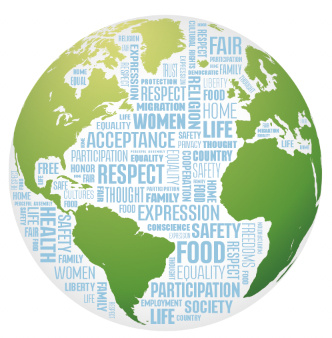 So the problem is …?

Wow that is exquisitely terrible! I always shy away from logo design for this reason - most people don’t know what a logo is supposed to be, how much they are worth, and what makes them effective. Not to mention all those competition sites.

and how annoyed were you?

No, not at all. The poor rep guy got a good talking-to by his boss because his (the rep’s) wanton requests were holding up my other jobs so my boss’s boss gave the rep’s boss an earful, who in turn was annoyed because the material missed press time again and again. Man, I love this game.

I can’t tell if you’re joking or not

It’s all a business transaction. I give you my service. You give me a shitload of money. Win win.

So the problem is …?

I’ve found it therapeutic to smile while driving to the bank to cache some clients’ checks.

driving to the bank

They came back because it really was not what they wanted.

After they finally realized the problem, in a couple of months, they did go with one of the options I initially showed them.

Wow @Just-B, ha. That word cloud logo is horrible. No fault of yours of course. And it is amusing that they ended up suing one of your other versions once they realized their mistake.