Before going to university studies

Hi everyone!
I’ve been thinking for a long time about this question and its stopping me from moving forward in art and design. I’m 14 years old and want to study visual communication and graphic design in a university in 4 - 5 years, but I have no idea what should I do in my teen years that will help me reach there. What should I do NOW? self learn? do traditional? how do I set my skills if I have no program or study to follow? I am so passionate about design and I have nowhere to navigate that passion to and I hate that feeling of wasting time. Would love to hear your suggestions and personal experiences cause I have no one to ask and talk to. thank you in advance!

I don’t think you need to do a whole lot at this point other than concentrate on school in general. Joining the school newspaper, yearbook staff or whatever your school has, might be a good idea. If your school offers some drawing, art or design classes, that would be good too. When I was in high school, I had a part-time, after-school job working at a local grocery store. I talked them into letting me design their weekly sales signs that hung in their windows. I’m sure they were really awful, but they liked them and it was a start.

I don’t know about every university, but in mine, the first year was called the foundation year. One of the main purposes of the foundation classes was to wipe clean any of the student’s preconceived notions of what they thought art and design was about. It was only after that first year that students began building upon that leveled and cleared foundation.

One possible danger from a too-intense and self-directed exploration of design at your age is picking up lots of bad habits and counterproductive ways of looking at things that might need to be abandoned and relearned later on. If you get yourself too deeply enmeshed in something, you just might burn out on it or get frustrated and lose interest. Of course, I don’t know you or your situation. You’ll, of course, need to judge for yourself what’s most appropriate for you.

One thing to remember is that graphic design isn’t really about art or creating cool stuff. It’s about using one’s artistic skills to solve real-world business problems for clients. I’m mentioning this because it’s probably the most common misperception people have of what graphic design is about.

This has reminded me of what a 50-something professor said during one of my freshman college writing classes. The professor was asked by someone in the class how he got started on his career. He unexpectedly responded by saying how his young and naive 17-year-old self made a decision for all the wrong reasons about what to study in school, which set him on a path that at 50 years old he was stuck with. He went on for the next several minutes philosophizing about how absurd it was to let 17-year-olds decide anything so important, long-lasting and consequential. He was a cynical, negative and largely unlikeable person, but there was some wisdom in his cynicism. With that in mind, maybe it’s best at 14 to just have fun with your design interests, keep your options open and when its time, really think it through from a long-term perspective — just in case you find over the next few years that it’s not really what you want to be doing for the rest of your life.

thank you for clearing it out for me, your point of view is helpful and ill give it real thought. I understand what you say about burning out, Im aware of that, i just wish i had some kind of experience to understand if its working for me. and actually exactly because of the fact that graphic design is about solving communication problems using some sort of creative skills is why im so interested in it. Art felt too hidden to me and suddenly here i can really take that artistic vision and make it worthy and help society with it. I just currently have that strong will to start do something and there is just no system i can reach, which is different from most other subjects. I guess i should leave that on pause for a while and see what i can do at the moment without the self struggle. Thank you very much! got me thinking.

If you are in the United States, talk to your high school guidance counselor during your freshman year and tell them you are interested in visual communication as a career. Most of the classes in high school are ones that are required and they will tell you what you need to take. But you also get a few electives based on your interests. Make sure they know your preference, or they may put you into classes that are irrelevant to you.

I agree with everything Just-B said. Join the student newspaper and yearbook. Usually you can take them once as a class for credit, then you can volunteer. I did that throughout high school and university and it was a valuable experience… dealing with other people and production deadlines and trying to adhere to other people’s style guides.

If you are fortunate enough to go to a large public school, you may have access to classes that are slightly outside the realm of graphic design. Video production, motion graphics, animation, photography, silk screening, printmaking… It’s important to explore different media, even if it’s something you aren’t going to pursue professionally.

Tell your guidance counselor you are interested in attending a College Fair for art schools. Even if you are still early in your high school career, attending can be a valuable experience just so you can see the options you have for higher education and talk to admissions representatives about what they’d like to see in applicant portfolios. Some schools are very interested in SAT score and GPA. Others don’t care about that and are only interested in your portfolio. And some only care whether you can write a tuition check.

What should I do NOW? self learn? do traditional? how do I set my skills if I have no program or study to follow?

Explore. Give yourself challenges, then research and try to create the solutions.

To my mind, the best thing you can do at the moment, is get yourself a solid, rounded education. You will be surprised how much knowledge you will need as a designer. It always helps to understand thing things you work on. I have worked on everything from science books to music, to atlases, the list goes on. You’ll need maths more than you ever thought. A good command English Language is, I’d say, pretty essential. English literature is a must, just be a human being and to understand the beauty of language. Work hard and get the best grades you can.

Regarding your descision to go to university, if you’re going to go down this route and onboard 50K+ of debt, I would caution you to make sure that you do your due deligence to make sure university you go to has a reputation for being a good place to learn design .

Most universities offer design programs, but the quality of these programs can sometimes be questionable.

We see it here sometimes: people that have gone through sub-par programs, have accured a mountain of debt and they post work here, and it looks like something produced in high-school. It’s very disappointing. 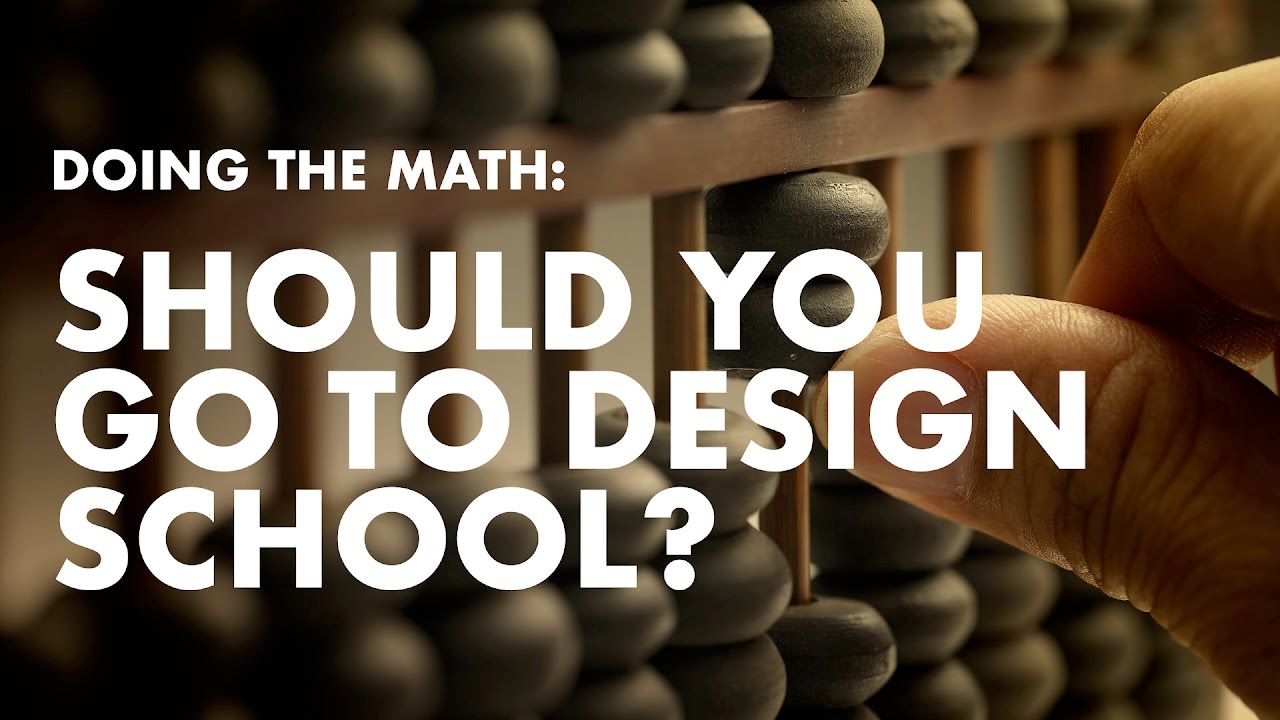 The reality is most places will hire you based on your portfolio.