Is there a formula for setting book margins in InDesign? I recently completed a project and didn’t think to change the default margins. Everything looked great on the screen (and in proofs I had printed, but they were not full page bleeds). When I received a copy of the completed book, I was shocked at how far the text came to the page edges! I’m working on another book and don’t want the same to happen. I have worked on previous books and never had this problem.
Thanks in advance!

There’s no formula for setting margins, set the margins you want. You may want to look into “creep” depending on how many pages there are and what kind of paper it’s printed on. 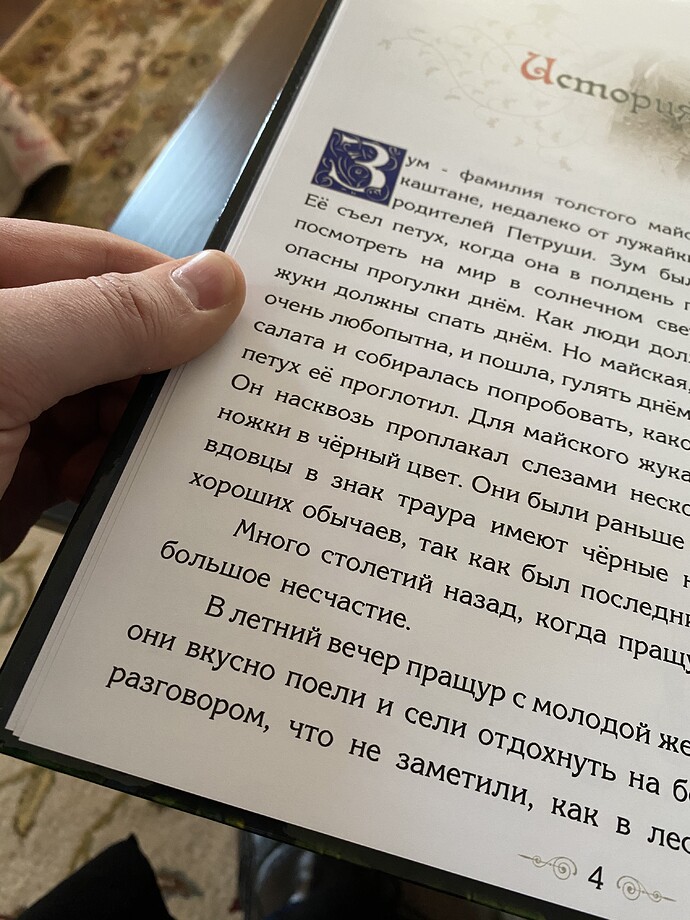 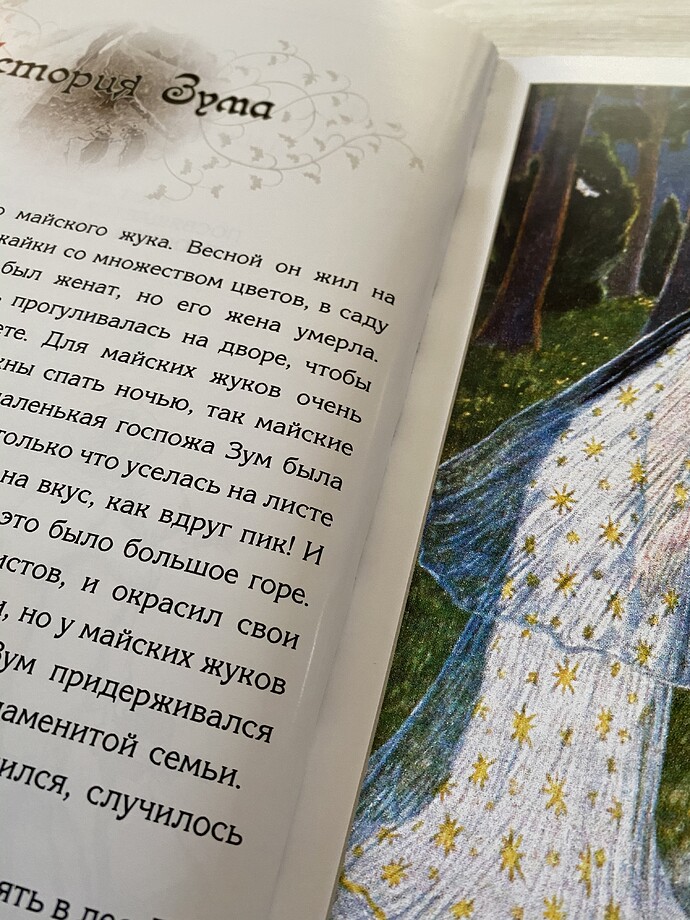 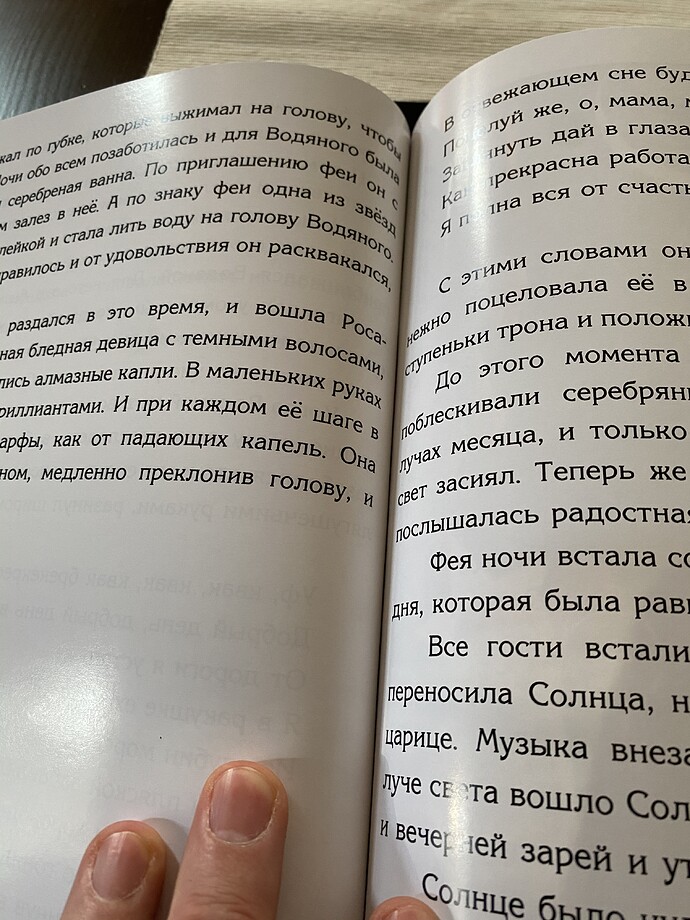 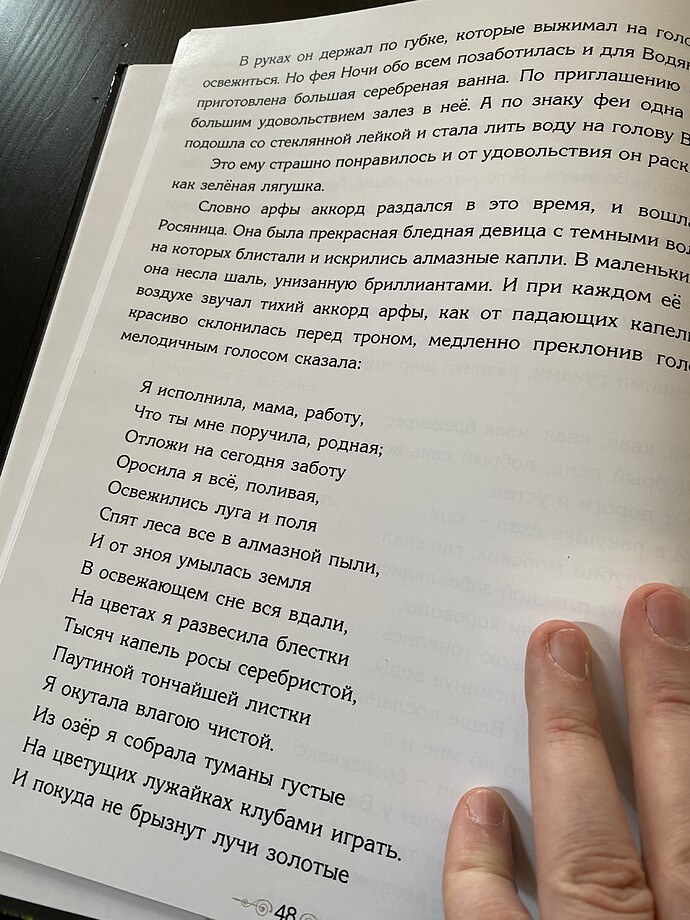 I couldn’t attach the photos before using my phone. Here’s what it looks like.

Thanks for the suggestions! I think the thickness of the book made a difference on how it turned out.

The printer should have supplied you with a bleed and safety margin, which would be the wiggle room for the page trim. If the safety is a standard 1/8 inch (or 3mm), that extra space needs to be considered when determining what your margins will be.

If the printer trimmed the book inside of the safety that was given, it becomes the printer’s fault and you’d be within your rights to ask for a reprint. Printers don’t typically make mistakes like that, though. It happens, but more often than not, it’s a designer who didn’t understand, plan for, or build the artwork correctly.

For what it’s worth, it seems you didn’t allow extra space on the inside edges to account for the binding gutter. That’s a common but serious mistake for those not familiar with book design.

I think the thickness of the book made a difference on how it turned out.

Combined with the binding (was it stitched or perfect-bound), yes, but that wouldn’t have affected the outside trim. Whatever the case, short of a printer/binder mistake, you apparently didn’t prepare the files with the appropriate margins. Sorry.

Going forward, if you ever have a similar book project, get two or three similar books that look right. Then measure the outside margins and determine for yourself how much space you’ll need to leave there and on the binding edge to keep the text from being buried too far down into the gutter.

Judging by your photos, though, it’s still usable, if not a little disappointing.

Several years ago, I designed a book for a client who insisted that it would be saddle stitched (a stapled binding). I argued, but she insisted that it was what her publisher and printer wanted, so I prepared the layout accordingly.

After giving her the files, the book somehow ended up being perfect bound, like I had been advocating all along. A reader almost had to break the binding to read the text in the gutter. It was a mess. At least it was the client’s fault.

Thank you for the great idea and comments! In general, are the right and left margins always the same? Or does it depend on the type of binding? My next book page size is 8.25" x 10.5". Currently, my margins are set at the default .5". I have a feeling I’m going to run into the same problem here. The margins were also set to .5" for the previous book… 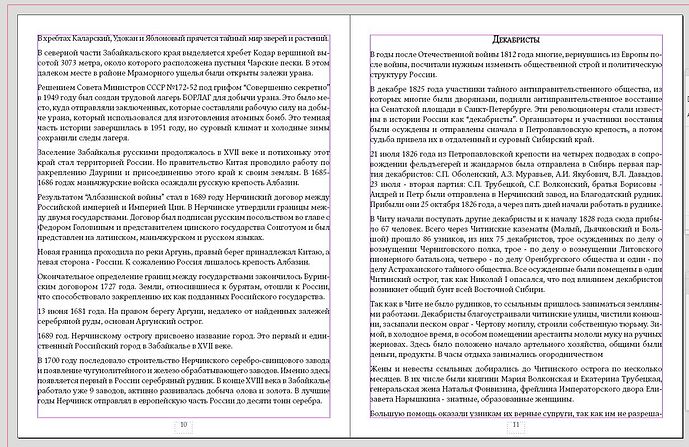 It looks like you might have a quarter-inch bleed. Is that really what the printer asked for? That’s unusually large for a book. If that is the case, keep in mind that it also requires a quarter-inch safety, which means the printer is saying they could could conceivably trim a quarter inch in either direction and still be within the agreed-upon specs. In your example, that could bring the trim very close to the edge of the text or bury it into the spine binding gutter. Personally, if this were me and a printer wanted a quarter-inch bleed/safety on a book, I’d be looking for another printer.

Even with a more standard 1/8-inch bleed/safety, I’d still make the margins considerably larger for aesthetic reasons. Readers don’t like to look at or read books jammed edge to edge with big, dense blocks of text. You need some breathing room around the edges.

I’d be inclined to set the margins more like the following. 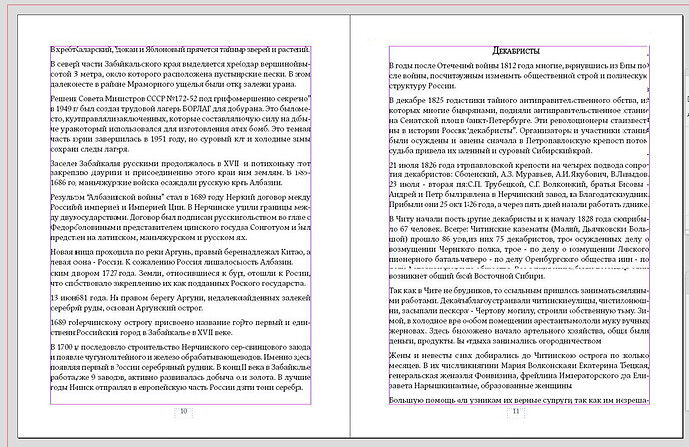 In addition, I’m not especially familiar with Cyrillic book conventions, but why do you have spaces between the paragraphs on this last example instead of using much more conventional paragraph indents? Paragraph spacing is the norm online, but not for printed materials — especially books dominated by large passages of text. Doing so, chops up the pages into awkward chunks and can result in uneven bottoms on the pages, like yours have.

Seriously, pick up some well-designed books and study their layouts. You’ll find some good, practical commonalities between them all.

In general, are the right and left margins always the same?

As mentioned, you’ll need to increase the inside margin on each page a bit to accommodate the gutter. I tend to give the gutter more space than some do, but what’s important is that the text doesn’t get buried down in the gutter so far that it becomes difficult or annoying to read.

On a two-page spread, the margins of both the right and left sides of that spread are typically the same unless there’s a good design reason for deviating from that norm (which isn’t common but totally OK if there’s a good reason for it.).

The absolute, first and foremost consideration in a book that’s meant to be picked up and read from cover to cover is that the text be legible, comfortable to read and that the layout be designed in a way as to help prevent reader fatigue, which means, as I mentioned, opening up the pages with bigger margins, getting rid of those awkward spaces between the paragraphs and coming up with graphical ways to break up the monotony with special chapter introductions, various subheadings, a sensitive treatment of page numbers and that sort of thing (like is the case on your first examples).

Look up the Cannons Of Page Design 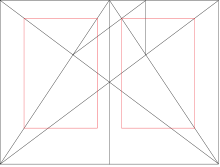 This can be a good starting point.

Best place to start is to ask the print vendor for recommendations.

Thank you, everyone! This is a great help!