Is anyone else seeing or smelling anything?
It’s pretty heavy over our area. There is a slight haze in the air and every now and again we get a faint hint of something similar to woodfire smoke smell. I wasn’t really paying attention. But, I’ve seen a couple people from different towns posting about wondering where the smoke was coming from. There have even been a few pics from last night with a reddish tint to the moon from the haze. 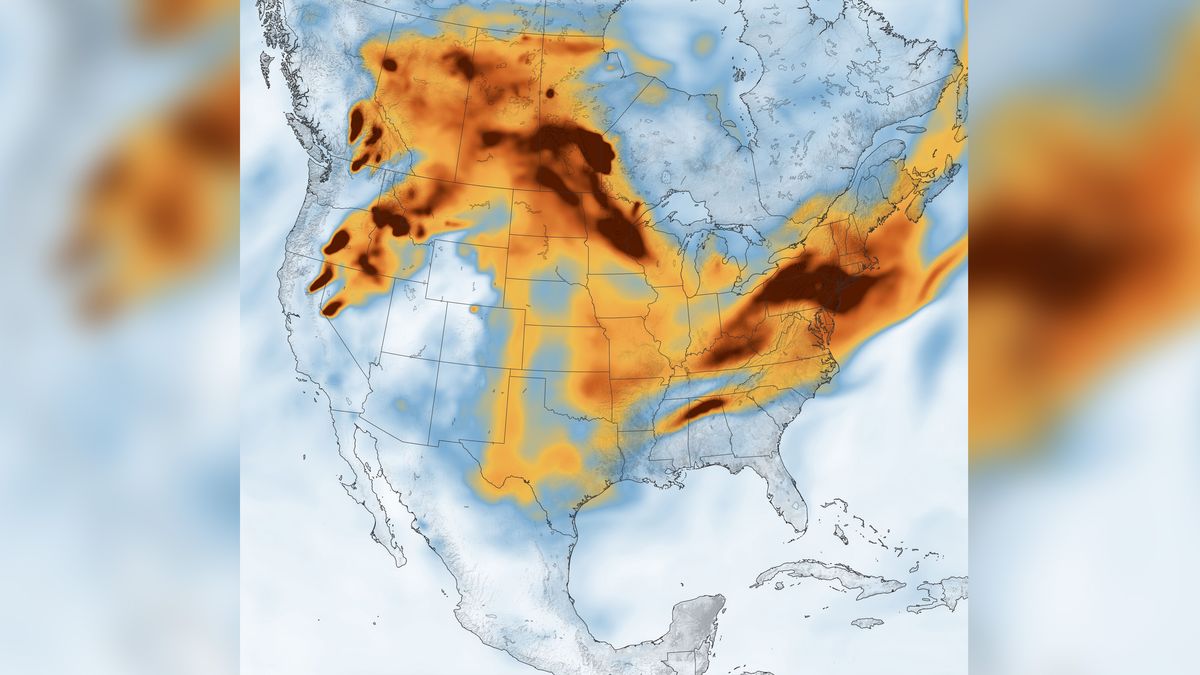 Wildfire smoke spreads across US in striking images from space

Here’s the current view from our house. You wouldn’t know there is a mountain range behind all that smoke. This has gotten to be pretty typical for this time of year in much of the western US. 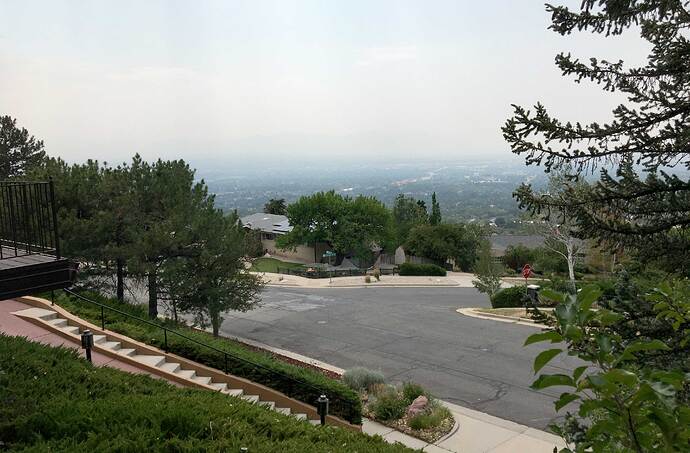 There is a slight haze in the air and every now and again we get a faint hint of something similar to woodfire smoke smell.

I’m jealous. I’d never know if there was smoke from a wildfire in my area because we live across the road from a bumblesquat who never stops burning … and what he’s burning is anyone’s guess. Our clothes and curtains all smell like a paper fire because of this guy. We’re in a private development, and his fires are “legal,” so I have little recourse but to make him aware that his smoke is a source of discomfort for the inhabitants of my property. I’ve done that several times, and each time he’s toned it down for a few days, and then returned to a frequency bordering on disorder.

Here’s the current view from our house.

Smoke aside, that’s a pretty sweet view you have.

Smoke aside, that’s a pretty sweet view you have.

Yeah, on a clear day we can see across Salt Lake City to the Oquirrh Mountains and the Great Salt Lake. Clear days are getting to be a rarity, though. The valley is full of smog in the winter and wildfire smoke in the summer.

The smokey air creates sort of a weird twilight, but it keeps the temperatures down a few degrees — a silver lining, I guess. I think most of it over the last week or so has blown in from the huge fires in Oregon.

Seems like the whole North American west coast is burning. Looking out my window the view is still crisp and clear.

We live across the road from a bumblesquat who never stops burning…
…his fires are “legal,” so I have little recourse.

When I was a kid, there was no garbage collection and nobody had ever heard of recycling. My parents just had an oil drum sitting a few hundred feet from the house where they burned all the burnable garbage. Every couple of months, we’d load all the cans, glass bottles and whatever else wouldn’t burn into the pickup truck and haul it to the county dump a few miles away.

We’d burn leaves in the fall and ditch banks in the summer. It was just sort of normal for all the farmers and ranchers in the area to do exactly the same thing. Looking back, it seems sort of weird, but it was routine stuff at the time.

Looking out my window the view is still crisp and clear.

Judging from what RKK said, it sounds like it’s all blown southeast from Ontario and settled over her place in New York.

I’m going to have to try to get outside tonight if I remember and look at the moon and see what it looks like. Where I am specifically has so much light pollution it’s hard to see anything.

Oh and my Grandparents had a burn barrel too. It was an old oil drum from Finch Pruyn. They burned everything. There was no recycling and there was also no garbage pick up. You had to drive trash to the dump which cost money … so might as well just burn it lol

Living in a metro area, we always had trash pickup while I was growing up. But I do remember putting our grass clippings into plastic garbage bags that were picked up and dumped in a landfill. That seems rather odd by today’s standards.

Watching last week’s epsiode of Mental Samurai, and the question was: “What is the two-word expression represented by this picture?” The picture was a bee with p-shopped human legs, bent at the knees. The befuddled contenstant cries out “BUMBLESQUAT!” Me: “Oh, I’m usin’ that.”

My sister in NH up by Monadnock took a pic of a VERY red sun at sunset last night because of the wildfires.

I’m near the MT/ID border, and for the last week it’s been unrelenting. There aren’t any big dangerous fires close enough to prompt evacuations, but there’s a bunch of other ones ringing our valley, so unless the wind blows in a very specific direction, all we’re getting is smoke. The last week in particular I was keeping an eye on the AQI maps, and there would be maybe an hour a day where the the reading was moderate or better, and the last couple of days it’s been Unhealthy or worse.

I did the smart thing and got my inhaler for low blood oxygen before it got this bad, but I do not enjoy using the thing. Currently have my office door closed and an air filter running, just trying to make sure I’ve got enough oxygen in my brain to actually work. It’s bloody miserable.

Well, the good news is it the Jet Stream seems to have pushed it out of our area for the most part.

A couple of pics of Lake George from the article: 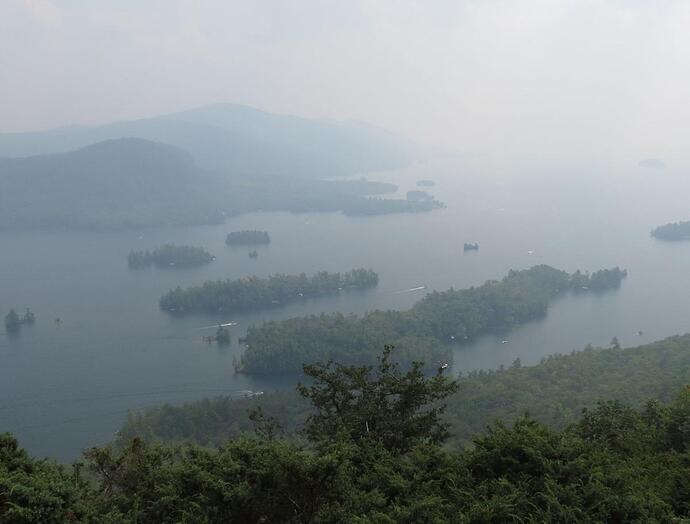 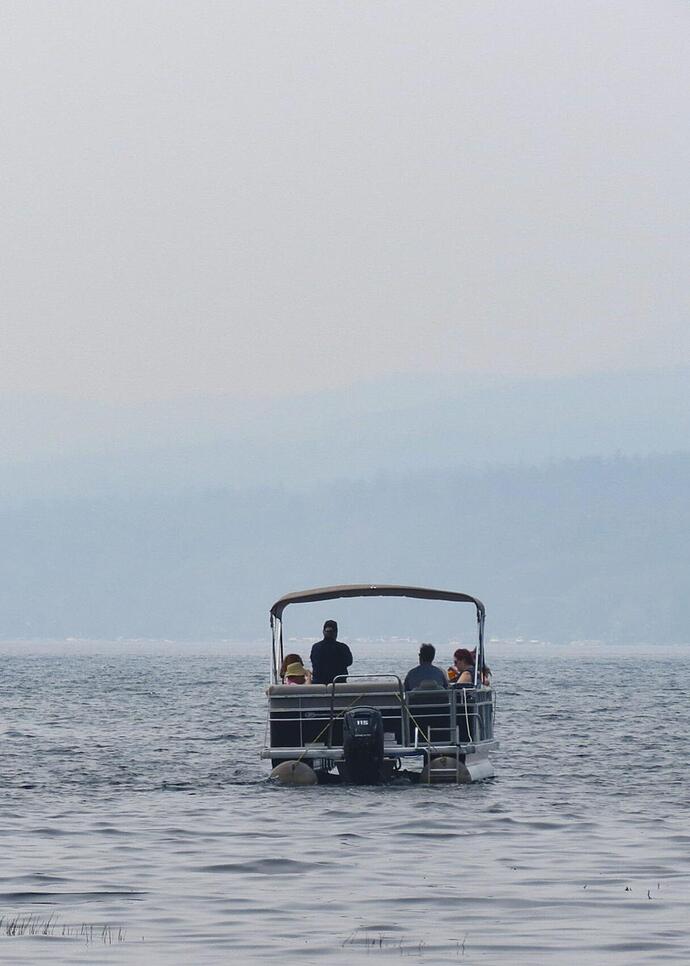 Here is an update from our local paper, The Post Star. The article is by Michael Goot.

If you thought you smelled smoke in the air on Monday, you were not imagining things.

The jet stream helps move that air, according to Vogt.

“That smoke gets captured by those stronger finds aloft,” she said.

Vogt said a high-pressure system that was in the air on Monday caused a stagnant air mass to remain in place.

The alert is issued when DEC expects the 24-hour average concentration of particles to exceed 35 micrograms per cubic meter.

DEC said exposure to fine particulate matter can cause short-term effects such as irritation to the eyes, nose and throat, coughing, sneezing, runny nose and shortness of breath. Prolonged exposure can worsen conditions such as asthma and heart disease.

People with heart and lung disease, older adults and children are advised to reduce prolonged or heavy exertion when the air quality is unhealthy.

Warren County is in the Adirondacks region, which had moderate air quality.

Smoke from wildfires in the western United States is also having an effect on air quality. There was also an alert issued last week. On July 20, the entire state was under an air quality health advisory because of the impact of the wildfires.

DEC said it is not rare for smoke from the West to travel this far east, but most of the time it stays in the atmosphere and has little effect on the surface.

It was not hazy on Tuesday. Vogt has viewed the satellite images and found that the smoky air mass has shifted to the east and northeast.

“It might be impacting eastern Massachusetts and portions of Maine. It looks like it’s out of New York,” she said.

On Tuesday, the state issued an air quality advisory for the New York City metro area from 11 a.m. to 11 p.m. because of a concern of fine particulate matter in the air.

A couple of pics of Lake George from the article

Sitting aside the smoke, Lake George looks like an incredibly beautiful lake. I’d love to have a boat and visit some of those little islands.

Lake George is gorgeous! Especially the farther north you go. 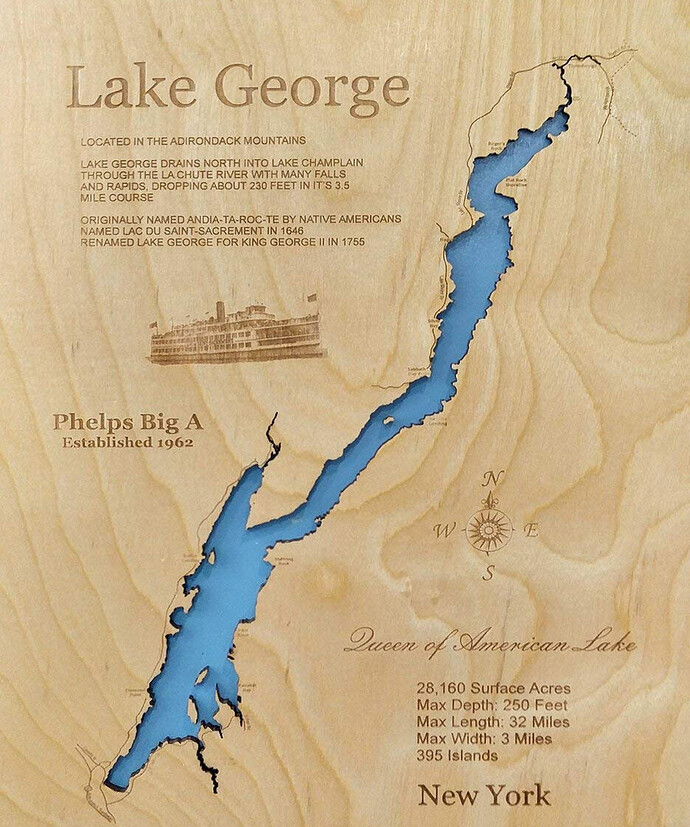 Here are some pics I have taken. Way too many to share. Sort of hard to pic my favs lol 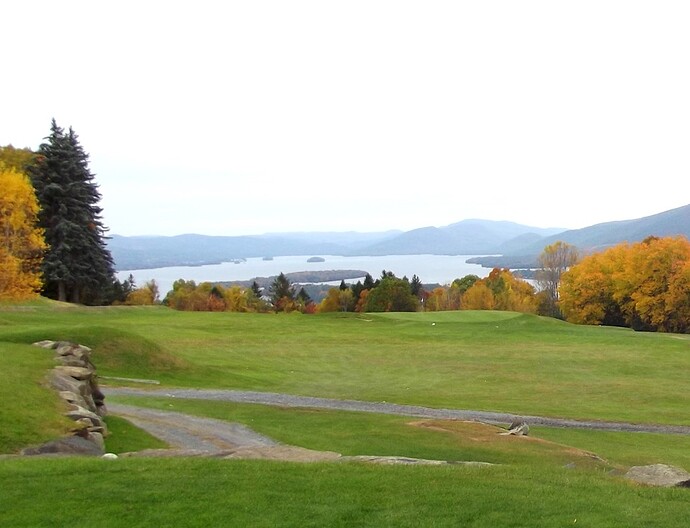 From a spot in Bolton Landing 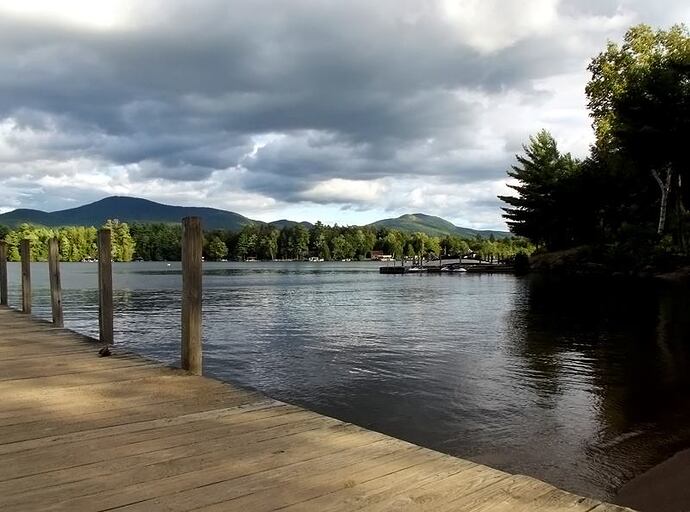 Looking at the Sagamore Hotel 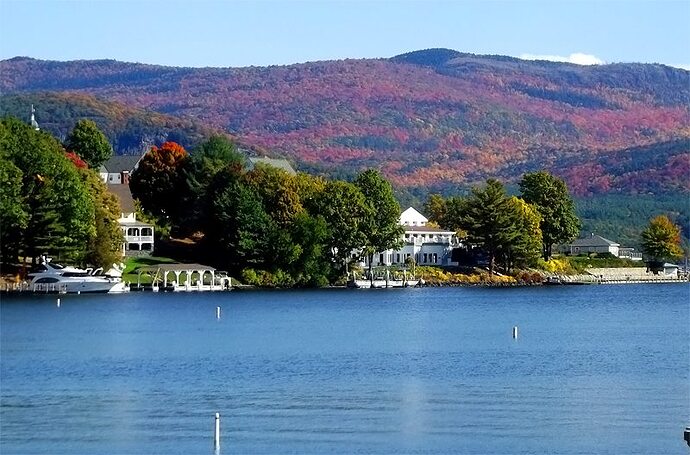 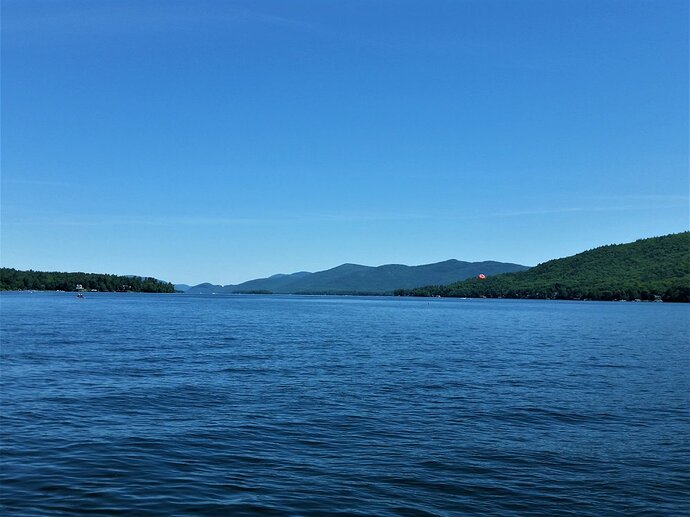 I’ll leave it at that. I could go on and on

It’s about one of my most favorite places to be

Beautiful pictures! Last time I was there was 2007 - summer camp at Wiawaka Holiday House.

My friend just got back from there

I also watched a documentary Saturday from the Chapman Museum on an archaeology dig at Wiawaka. It was great to watch … being the doc junkie I am 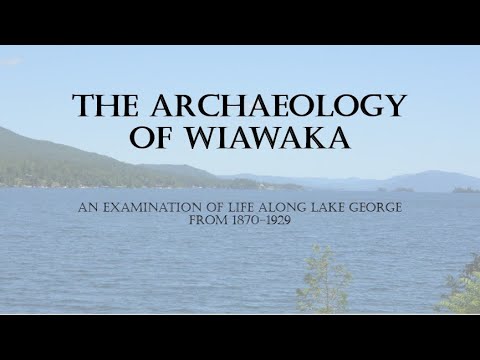