There are people who equate different to wrong. I beg to differ.

I also suffer from imposter syndrome, it can be extremely difficult sometimes. 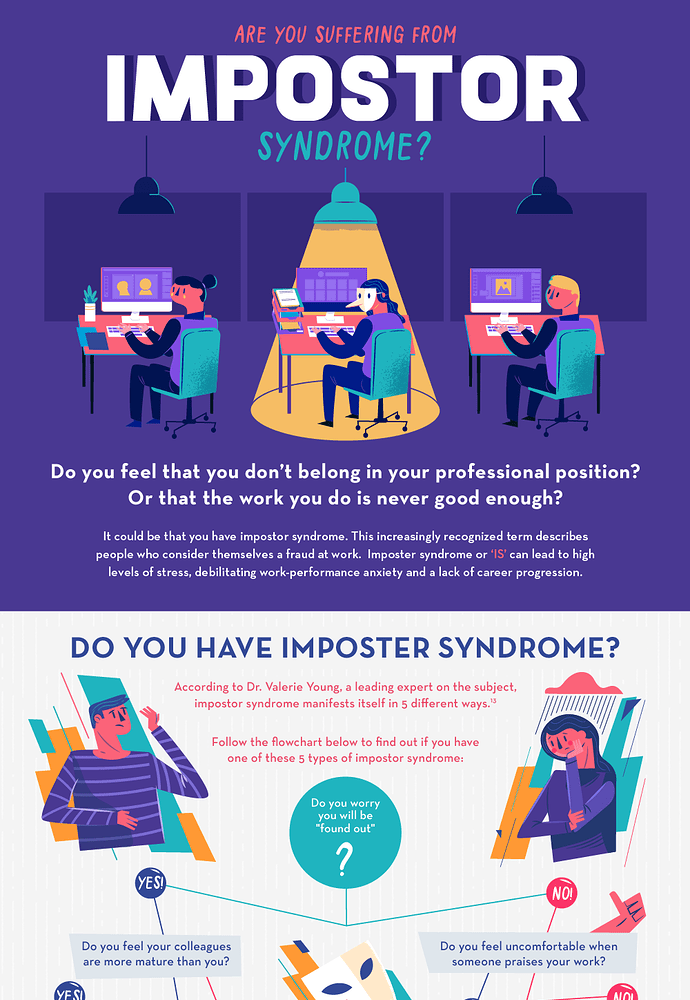 This is a nice infographic Silence04, and the advice is quite practical and actually genuinely useful. Thanks for sharing it.

No sweat, every person in the world has the same s**t going on, except some hide it better

I’ve been in design for 6 years now and most of the time I struggled with crippling panic attacks, self worth issues, decision fatigue, paralizing anxiety and of course the impostor syndrome. Only for the past six months I can say I improved.

Read the story first, so you’ll have the right context for what I’m about to tell you later on.

After closing my small rock bar my whole life went spiraling downwards…I broke up with my girlfriend, we have a daughter together, I lost all my money, declared bancrupcy, moved into a new apartment with room mates and for the first time in my life started asking a question “what if everything I know about life is bullshit? Aparently nothing I do works”. I was 29, going 30 back then.

I was born in Soviet Russia and I thought I was really tough, so all my panic attacks and other crap came as a shock…I mean “wtf!!! Me!!! THE Alex!!! Anxiety???Really dude!!!” Yet there I was, broken, defeated, broke and clueless…
Early on (I’m 35 now) I finished a highschool of design here in Slovenia, but than decided to take on marketing instead, because you know…money…
So now, when my business failed (2013), I decided to resume my creative endeavours and enrolled into academy. Dropped out after 2 years, because I was teaching myself way faster than those old professors who themselves have trouble using ‘refine edge’. I was on my own now, trying to get client work and making a decent portfolio, working as a web store manager and dealing with consequences of my failures. Simultaniously my mental troubles surfaced and started f*****g me up really bad. I moved from place to place, could barely find projects and struggled with my portfolio.

I had no choice but to start working on myself and put myself first. I still struggle sometimes, but I am way stronger now, because I got help. I suggest you get yourself a coach too. Or take therapy. There’s nothing embaracing about it and you won’t feel so alone in this. Athletes are in therapy all the time. But therapy alone is just a part of the whole thing.

After a while I became calmer, more determined, started getting good projects and began developing my own self development techniques. Luckily there’s a lot of helpful things out there on the web.
If you want to get out of this rut, I strongly suggest this:

These are the basic practices I do every day. Along with them I practice vocals and allow myself to do things that I love every day, even for 10 minutes. It nurtures your soul.
After a while I began feeling more focused and calm and recently just got my biggest projects (srcly, it’s huge).

There…
There’s a lot more I can give you, but I gotta run right now, so drop me a line, you’re not alone in this.

I’m so sorry for the delay in responding to your message here. It was very inspiring and I’m genuinely humbled that you’d go to such effort to offer such help. Thank you so much for this. It’s fantastic that things have worked out well for you after such unfortunate struggles. You’re clearly a very good person with great compassion and empathy.

After reading through all of these comments from everyone here, it’s clear that I’m not alone in feeling occasional self-doubt. The advice offered from everyone in terms of combatting this ‘imposter syndrome’ has been a real help to me.

Thank you all!
JM

I’ve been doing this for 20 years and still have self doubt about the quality of my work. I still see great stuff and I’m like “I COULD NEVER BE THAT GOOD.” I’m not sure how you identify, but as a woman I struggle with this all the time. I’ve had to force myself to advocate for myself, and try to take time to remember all the times I was complimented on my work, impressed people, impressed myself, and focus on how hard I work and all the good stuff I get to do. Time and experience have helped, but it does not eliminate the doubt. It’s normal, and has a LOT of contributing factors both individually and socially.

I’ve held off responding to this topic since my views are nuanced and go against the grain just a bit.

Everyone experiences imposter syndrome — especially starting out and still comparing oneself to others’ work. As long as it doesn’t become debilitating, it’s a good thing since it prompts us to constantly improve.

For me, personally, I stopped feeling this sort of doubt after about 15 years working in the field. I came to realize that some people were better at some things, which I might not be great at doing. However, those things that I was especially interested in and good at, I realized really had become pretty good.

What really made the difference for me was heading back to graduate school after about 10 years working at agencies and design studios. The instructors whom I regarded as design geniuses when I was doing my undergraduate work had oddly become only mediocre and primarily teachers of things they weren’t necessarily all that great at doing themselves. Of course they had stayed the same and it was me who had grown. I began looking at the winners of various design competitions and realized that many of them weren’t really all that great — at least to me. I started submitting work and often times winning with my less-than-best work, while my best stuff didn’t do anything. I started serving as a judge in various competitions and came to realize that it was almost all a subjective beauty contest based around incomplete personal opinions of the judges.

After years of trying hard, lots of practice and some talent, a point is reached where one realizes that one is performing at a level that few people really care about. You’re doing great work, but the clients and employers can’t tell the difference between mostly good and great anyway. For that matter, half the time, they can’t tell the difference between poor and great.

There’s a lot more to design than being good at design. I constantly run into mediocre designers who excel at their jobs — not through design ability, but through their people savvy skills, their personalities, their aggressiveness and marketing abilities (which I’m not very good at). After someone becomes reasonably competent and knows the ins and outs of the game, the people skills needed to sell one’s work and convince employers and clients holds a lot more weight than some pie-in-the-sky ideal of stellar, ground-breaking design work.

The great graphic design geniuses from the past that we’ve all heard about honestly weren’t all that great — most were just in the business early on and made a name for themselves at a time when the competition was low. And most of the time, those names were made because they were good at selling themselves, worked at high-profile places and worked on high-profile accounts.

I’ve never given up on doing better and better work, but it’s become a personal quest and priority rather than thinking that better work somehow qualifies me for better jobs and better salaries. I’m most definitely not suggesting that anyone give up on being the best designer possible — I’m mostly suggesting that this idealism, after a certain point, becomes a personal concern rather than something that most employers and clients appreciate.

If you’re interested, read Ayn Rand’s book, The Fountainhead. It’s a story about an idealistic, highly talented architect who is constantly is outmaneuvered by his lesser-talented competitors who have only a fraction of the talent, but more marketing savvy and personality skills.

So the bottom line here is that practicing is essential, struggling to become a better a designer necessary. This is a tough, competitive field. However, after you’ve paid your dues and put in the time, success depends on more than great design. Focus instead on a more holistic approach where you don’t get too caught up in your self doubt that you lose sight of the bigger career picture. After a certain point, other skills in your career become equally or more important. Quit worrying so much about how good of a designer you are compared to others and just do your best while keeping the bigger picture in mind.

I been doing this 35 years. I know I’m good at my job, but I also understand the power of hubris to stab you in the back. I’ve made more than one really expensive mistake through over-confidence. Self doubt keeps me sharp, makes me check again that the job is correct before I send it on. Without it I would be less successful, less professional, less employable.

This is excellent, thank you Just-B. I found myself nodding as I was reading it.

I’ve recently had a chat with various colleagues about this topic and one designer stressed the importance of self-confidence and how in the majority of cases, the designers who get the work are less ‘talented’ but possess a more apparent self-belief than the designers who appear hesitant or cautious. It’s all about perception. Basically, it’s similar to Trump’s rise to power!

My colleague advised: “Next time a potential client asks you if you can do something that might really stretch your skill-set, just say “Yes” immediately. You know yourself that you can figure these things out.”

He then took an inventory of all of my design talents and technical skills and pointed out how there were no other designers in our office with my range of skills (I’m currently freelancing onsite for an international sports betting company with around 50 other designers across a range of media).

Sorry, I understand that this might sound arrogant - believe me, I wish I was arrogant! Then I wouldn’t be initiating topics about self-doubt and indecision on Graphic Design forums. I’m just trying to say that it took someone else to actually point out my value. That’s very rare as in my experience, it’s quite a competitive industry and praise can be scarce.

My colleague’s observation was that a lack of self-confidence was by far my biggest hindrance, because technically and design-wise, I’m doing ok. It felt great to be ‘assessed’ like this in such a positive way.

Forums like this one really help to keep you current and focused - especially the Crit Pit.

Anyway, I’ll keep an eye open for that book - it sounds great and very relevant. Thanks again for your help and advice.

At most agencies I’ve worked with or for, the creative talent is largely kept out of sight. The account executives, who work directly with the clients, are the outgoing, self-confident and extroverted sales people. They’re great at selling the work but need to rely on other people with other talents to produce it.

There are certainly exceptions, but my experience has been that the most talented designers are typically introspective problem solvers who habitually analyze their work looking for ways to make it better. They seem hesitant about their work, because they know there’s always room for improvement, which is what makes them better — as in practice makes perfect.

The designers who exude confidence are often the ones who have come to realize their work only needs to be good enough to impress — their friendly, can-do, confident personalities fill in the gaps and smooth over whatever doubts the client might have.