One of the things I like about GDF is that it’s a place to escape the news of the day and politics. So at the risk of allowing news to infect our little community (see what I did there?), I’m wondering how you and/or your area have been affected by Coronavirus.

Up until today, it hasn’t affected me at all. My wife went shopping this morning for, among other things, toilet paper and paper towels. It’s not that we are wanting to stockpile or hoard them, we’re just running low. The toilet paper was wiped out, paper towels were almost gone, and any sort of soap or disinfectant was virtually wiped out. She saw on some websites, after the fact, that there was a shortage and people were being urged not to hoard and that that would only exasperate the problem.

I have a routine physical on Friday. I’m feeling fine. This has been scheduled for months as I have a birthday coming up. I’m considering cancelling the appointment just to avoid being around sick people in general – not that I think there will be someone in the waiting room with Coronavirus.

I didn’t want to post anything about this here either … it’s my one safe haven from BS since everyone is losing their minds. But, since you brought it up…

Shitting… which is NOT a symptom of coronavirus, is apparently still a huge worry for some. We are seeing dwindled supplies of TP all over the place. Hand sanitizer is gone as well as bleach and lysol. And apparently no one knew how to wash their hands until now. I’m so done with “breaking news” on this stuff. All the St. Patrick’s day parades have been cancelled. All the SUNY’s and CUNY’s are going on Spring Break and then shutting down and morphing into “distance learning” until the end of Spring Semester.

I’m trying to avoid social media in general right now. There are epic posts of stupidity floating around. 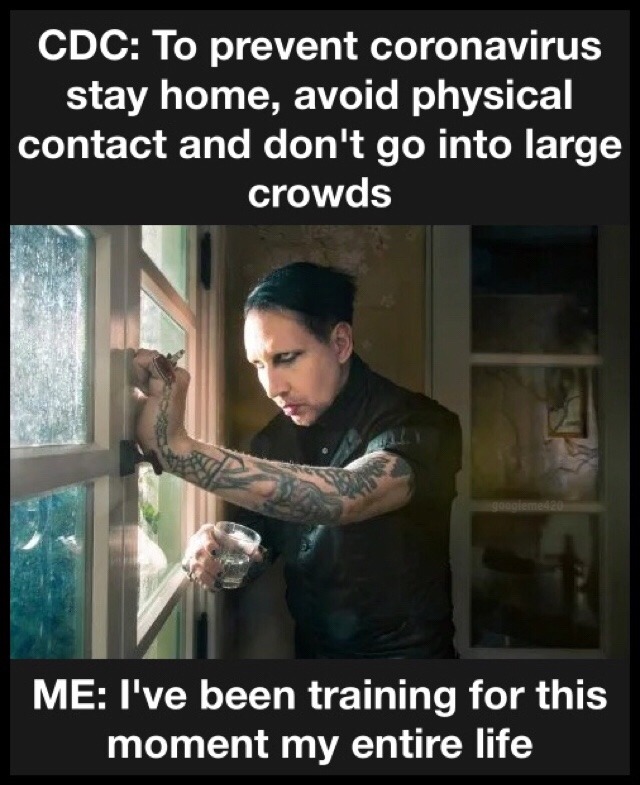 I live in a big city and there is real reason for concern about this pandemic.

One of my workers is currently under quarantine, as is their entire family. Its in our neighborhoods, there is a serious lack of testing, and it’s only going to get worse for us.

I could seriously care less about not having toilet paper, I’m more concerned about everyone’s health. If this isn’t affecting your day-to-day now, its only a matter of time before it does.

someone 3 miles away has the virus.
i work at home and have not left a .24 square mile in the last 2 weeks because i had a creative spurt. i have no intention of going anywhere for a while now.

I’m extremely concerned about it. I have a job that requires meeting people and, even today, people were shaking hands, mingling like nothing had changed while dipping their hands into the M&M bowl. I was doing my best to stay several feet away from everyone, not touching anything with my hands and keeping my hands as far away from my face as possible. I noticed several other people nervously doing the same.

Some people are panicking, but others are shaking it off like it’s just another hyped up flu-like thing going around. I was talking to Mrs Just-B and it’s just not sinking in with her that tens of millions of people could die from this once it really takes hold across the world — including both of us. So far only two people have been diagnosed here in Utah, but there are undoubtedly people walking around the city with mild symptoms and spreading it thinking they just have a case of the sniffles.

Right now, if it weren’t for my need for a job, health insurance and keeping Mrs Just-B happy, I think I’d head out of the city and live at my country place for the next few months while holing up as a semi-hermit and spending my time hiking in the mountains. I’ve always wanted to spend a year or two living like Henry David Thoreau. I just wish my wife shared a similar vision.

the bright orange and blue MMs with suction cups are really corona virus.
the rest pf those MMs are edible and enjoyable!
-stay safe!

I need to have a talk with my mom. She is of the age that it would be a serious concern if she were to come down with this. Not a talk I’m looking forward to.

NBA just canceled the season, NCAA will not allow fans to watch games.
i never thought this would happen
well no one watches the NBA anymore…

I need to have a talk with my mom. She is of the age that it would be a serious concern if she were to come down with this. Not a talk I’m looking forward to.

My parents are both gone already. With the exception of my younger sister, all my other siblings are lots older than me and definitely within the age group most susceptible to this. My parents had four kids at the very beginning of their marriage, then my sister and I came along years later in their early 40s. But even I am in the younger of the older age groups needing to be extremely careful.

I hadn’t mentioned this here, and wasn’t planning to, but one of my brothers died suddenly a couple of weeks ago. His wife has diabetes and needs dialysis two or three times each week. I’m very worried about her and, for that matter, all my other older brothers and sisters whose lives, unlike my own, center around church gatherings. If there was ever a reason to stay away from crowds, whether church, theaters, concerts, classrooms, whatever, this is it and now is that time.

And I haven’t even mentioned my or anyone else’s 401(k)s and other retirement-related investments tanking, but that’s seemingly of secondary importance right now.

one of my brothers died suddenly a couple of weeks ago.

My younger brother collapsed while exercising and passed away just before Christmas, so I’m grimly familiar with what you must be feeling.

one of my brothers

I am very sorry to hear that. My condolences.

one of my brothers died suddenly a couple of weeks ago

Wow. Condolences to both of you.

B and Hotbutton, my condolences on your loss.

I have a very what you might call fatalistic view on life on this planet.
I have a very hard time believing the numbers on this virus. With so many people in the broad age range of 10-50 years old that shake this thing with no more symptoms than the common flu, I believe the “confirmed” cases are far under-reported. Which would make the death rate lower than it actually appears.

Not that I’m not taking it seriously for those immuno-compromised or elderly.
What I am taking seriously is that we have had a LOT of work cancelled because of this. Events mostly, but the ripple effect of no travel/no vacation/no shopping is soon gonna take a toll.

Weird things missing from the grocery store if you know where to look.
Shelf stable milk.
Flour
Sugar
TP of course
Clorox (there’s been some bad advice circulating the web about actually drinking clorox to stave this thing off.)
Hand sanitizer
Rubbing alcohol
alcohol prep pads
Rubber gloves
And a host of other things.

Steve-o, I had a physical a couple days ago and had x-rays. I’m more worried about the 3 kids with strep waiting for throat cultures in the lab area.

Well this has taken a bit of a turn.

I’m so sorry for your loss B and HB. You both have my deepest sympathies

As for cancellations I live in a tourist area and folks from Lake George are already a bit panicky because people have already started cancelling reservations for the upcoming season. I live 500 feet from the Race Track. We are talking 100’s of thousands of people from all over the world descend to this area for July and August. Now maybe by then things will be well in hand by then but, everyone in tourism is very nervous.

Also my Niece who has finished her Bachelors Degree may not be able to graduate. She would still get her diploma of course . but they are talking of cancelling the celebration. My heart is hurting so for her right now. All that hard work and part of the greatness of it is getting to walk across that stage.

Well this has taken a bit of a turn.

Yeah, sorry about that, but maybe some news I just received moments ago will lighten it back up . . .

Feels like a potentially crazy one. Two months ago, our 13 year-old daughter won a regional spelling bee and earned her way into the Scripps National Spelling Bee (so proud of her!), starting on Sunday and spread throughout the week, with the finals live on ESPN Thursday night. We’ve been helping her prepare, but the thing is really one giant unknown in just about every way. So send some good mojo our way, and maybe she’ll be on live TV spelling words none of us have ever heard before.

Well Haleigh again won her school and earned a spot in the regional bee. But a sponsorship change shifted our school district into a much larger “region,” where over 100 other school-level winners would have to be outspelled. So, like the Scripps National Bee, it was to be done in 2 phases; a written elimination round, and then a month later, a traditional oral bee with the survivers of the written test.

Well, the written test was 3 weeks ago, and the oral final round was just cancelled due to Coronavirus. the organizer just contacted us and explained that Scripps won’t allow the region to be without a champion, so if there was a single contestant who outscored all the others in the written round—and there was—they they would get the trip to Scripps. So we’re going again this year!

Congratulations to her! What a smarty pants!

Weekend Update: No public gatherings over 250, all county buildings shut down, School districts are closing for an undetermined amount of time.

I’ll show you a little up close and personal of what’s going on here. This is just one of our markets. If the Zombie Apocalypse hits … we are never gonna survive it

This is the store my Niece works at. She has been on overtime for the past 4 days working over night stocking to try to get the shelves filled back up for the next round of hoarders. There have already been incidents of people pulling items out of other peoples carts. Some have really gone F-ing nuts. This was from our conversation last night:

Me: I’m more scared of the people than the virus at this point. …be careful

Her: Same haha I don’t think I’ll perish in the event I get the virus but someone might kill me for some charmin 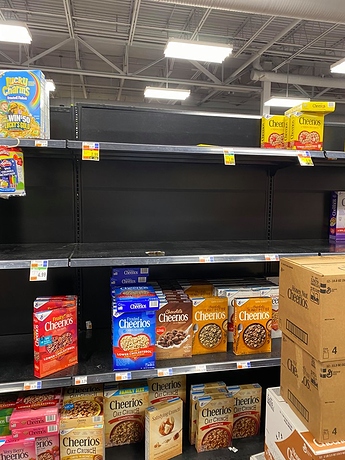 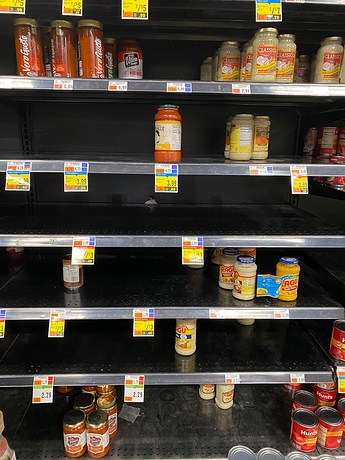 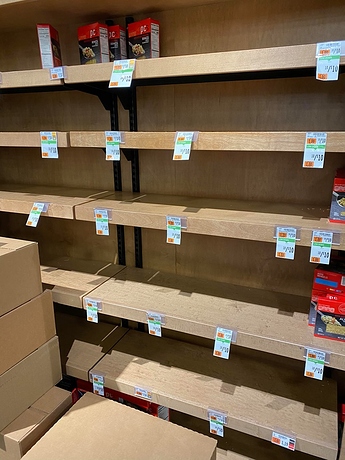 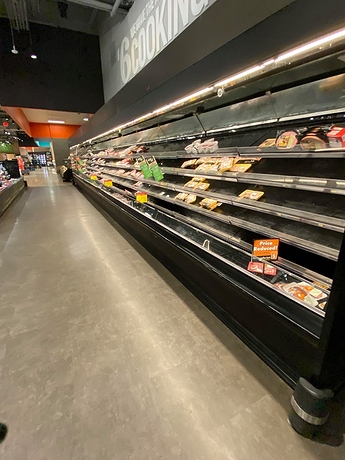 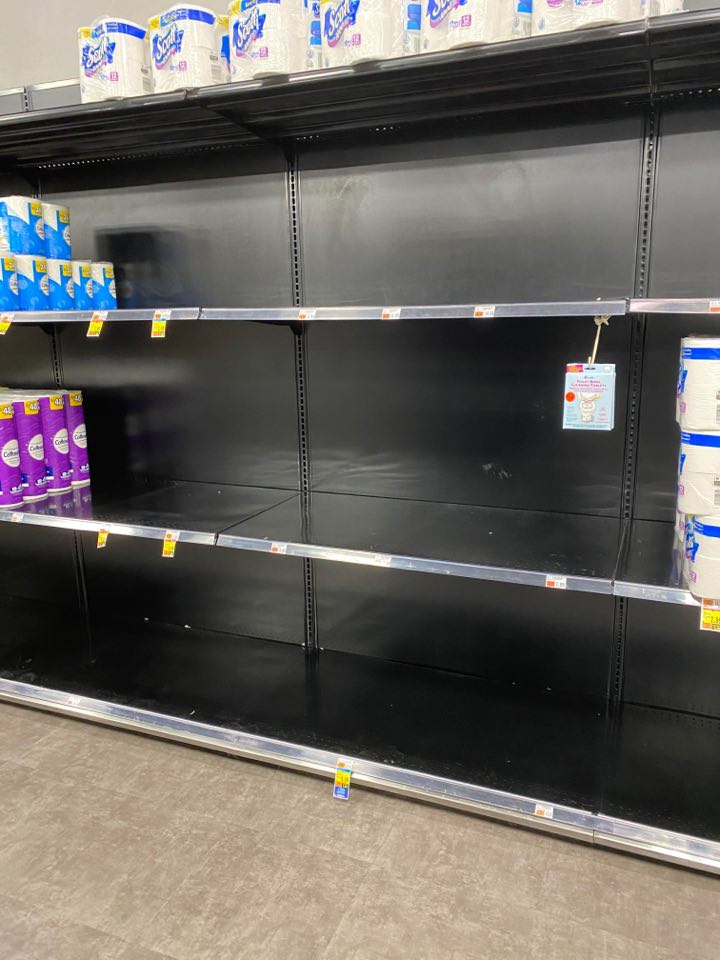 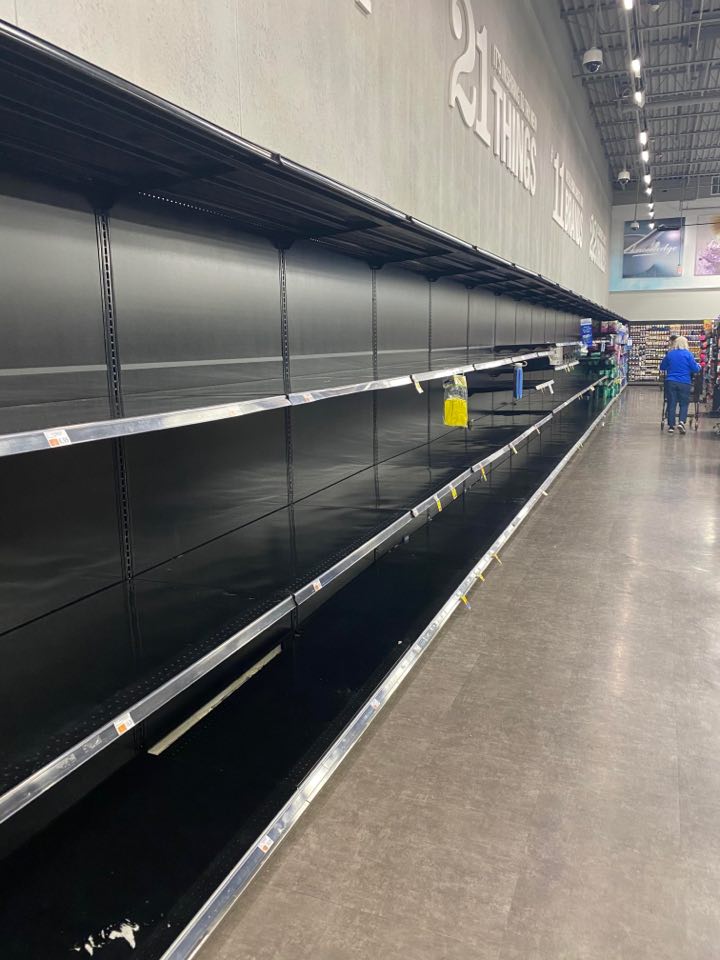 btw … I’ve never seen shelves like this … even when they are predicting a Nor’easter and a good portion of the population hear that as … “go into panic mode, you will be snowed in for weeks”

Mrs. Steve O went to the grocery store this morning. She said it was very busy, but I didn’t ask if the aisles were wiped out like RKK’s photos. I’ll have to ask her. She brought home a couple of whole chickens to smoke for tomorrow night’s dinner. That was the main thing I was concerned about.