Hi There, I have recently seen some very cool designs which incorporate word clouds into maps, so that the places names are in its precise location on the map. In most cases, these creations are so detailed that I cannot imagine these were created by any other method other than a computer.

Does anyone know of a resource which creates these Word Clouds? Example provided 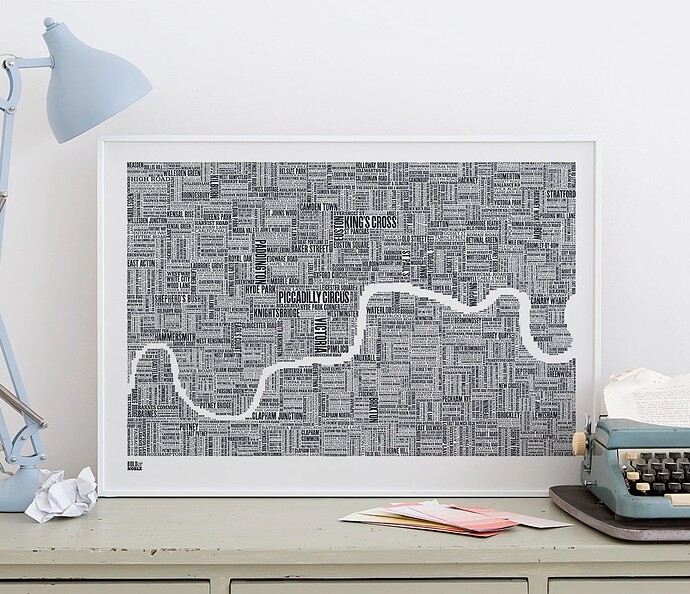 There are quite a few online word cloud generators — WordArt.com, for example. There are many others you can find with a quick Google search.

However, your example of a map of London has the additional problem of placing the names in approximately the right spot on the map. I don’t know of any that will do that since it would involve an interaction with some kind of GIS database or a lot of drag-and-drop hand work. It’s possible, though.

Yes, I’ve looked at all the basic word cloud generators and none of these fit the bill since they place the words in random locations. I’m beginning to think that this is all done by hand, which might explain why the artwork has a hefty price tag

Thanks for your input though

About three years ago, I designed a word cloud graphic for a human rights organization. They wanted a map of the world where all the country names were positioned in their approximate locations to form the continents. Then they wanted all the odd bits that couldn’t be formed using only country names, such as peninsulas, islands, and various coastal outline shapes, to be formed from smaller words that pertained to human rights.

At first, it seemed like an impossible project, but I ended up using a variable font with a width and weight axis that enabled me to stretch, condense, and change the weight of the words to fit the spaces the rectangular spaces they needed to occupy. It was still time-consuming, but the variable font made it much less difficult than I originally anticipated.

That’s interesting, but as I suspected. Can I ask what you mean by a variable font? Is that a regular font that you used a distortion tool to adjust?

Is that a regular font that you used a distortion tool to adjust?

Not exactly. A variable font is a special kind of font that contains various master fonts within the same file, for example, a thin and a heavy weight plus a condensed and extended version. From these masters, it’s easy to create every possible variation of the type between these weights and widths. The type isn’t artificially condensed or bolded, which causes ugly type distortions. Instead, the type is or blended to whatever degree is desired between the masters.

Adobe Illustrator has great support for variable fonts. Here’s a quick demo that someone created.

Google has quite a few free-to-use variable fonts. The one below for example. If you open the page and scroll down past the examples, there are sliders that enable you to play around with the variable axes.

Great stuff, very useful information indeed. Thanks for all your help