I hope everyone who celebrates tomorrow has a wonderful, safe and very yummy holiday! 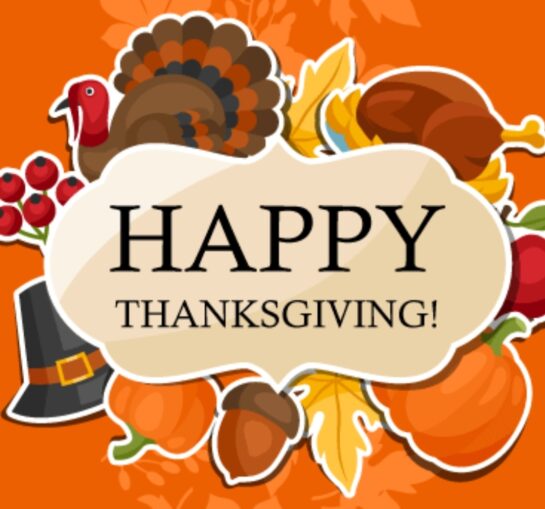 We will be going to my sisters. She is doing the bird, potatoes and pies. I’ve done corn casserole, sausage stuffing, green beans and home made cranberry/orange sauce. We will stop on the way and grab some Egg Nog with any luck. It seems to be a hot commodity this year

What’s on your menu?

Yes, it’s one of the year’s biggest holidays for those of us in the U.S. To those elsewhere in the world, a happy Thanksgiving to you anyway.

I just had a mental blank there. Thanksgiving again?

Oh right. In Canada, we had it last month.

Happy Thanksgiving everyone down south!

I’ve never quite understood why we Americans celebrate Thanksgiving toward the end of November. It started as a seasonal big meal made from the fruits of a successful harvest, but the fall harvest ended two months ago.

Once again, I think our Canadian neighbors have gotten it right.

We’re not driving anywhere this weekend so it’ll be a quiet, at home thing.
We’re having a roast duck stuffed with apples and cinnamon (and a handful of golden raisins,) homemade bread, home-grown yams, and pumpkin pie made from sugar pumpkins I got at the farm up the street (I buy a crate every year to boil down for pumpkin pie pudding all winter.) Also an apple pie made from Northern Spy apples from over NY way. They are the Best!

The fall harvest up here where Thanksgiving started doesn’t end until just after the first hard frost, which was last week (really late this year.) If you are harvesting to store for the winter, you are still drying and canning and salting/smoking meat until about now. All that work came first before sitting down for a family get together. I still have most of a crate of apples to dry for chips and canning some for applesauce this weekend. My dad used to get half a pig and a whole hind-quarter of beef in the fall from the local abattoir and we’d be doing hamburg, sausage, and smoked bacon around now too (or more back in late October, when it’s cold enough to smoke meat without freezing or spoiling.) I don’t do that any more though. Not enough family around to help eat it.

And yams have to cure, LOL. I dug em a month ago and they’ve been drying in the pantry. The sugar has to develop from the starches, otherwise they aren’t “sweet potatoes.”

The fall harvest up here where Thanksgiving started doesn’t end until just after the first frost, which was last week (really late this year.) If you are harvesting to store for the winter, you are still drying and canning and salting/smoking meat until about now.

That’s interesting. I hadn’t considered that in New England (where Thanksgiving began) autumn weather last a bit longer and that spring comes a bit later. That makes sense.

We’re having a roast duck stuffed with apples and cinnamon (and a handful of golden raisins,) homemade bread, home-grown yams, and pumpkin pie made from sugar pumpkins I got at the farm up the street (I buy a crate every year to boil down for pumpkin pie pudding all winter.) Also an apple pie made from Northern Spy apples from over NY way. They are the Best!

We’ll have a pretty traditional meal. It will be a pretty big crew of 19 folks. Everyone pitches in.

If you’ll indulge me for a moment . . . I remember growing up and having holidays and birthday parties and there being a ton of people there. It wasn’t until I was in college that I lost the first of my grandparents. Anyway, time went on, and family gatherings got smaller. Now they’re on the upswing. The difference? Instead of having big family gatherings with a bunch of family upstream from me, now, when we have big family gatherings, I’m one of the older ones. There are still some older than me, but not too many.

I didn’t have this point in mind when I started typing, but this is just a reminder of how fast time goes. Enjoy your family while you can. They won’t be there forever.

Enjoy your family while you can. They won’t be there forever.

I’m sort of in the same boat. We used to have huge celebrations when I was a kid. My Grandfather was one of 10 children. They all were married and had roughly 4 kids each… and so on

No Grandparents
No Parents
Most Aunts and Uncles have also passed.
Cousins haven’t seen each other in so many years that we wouldn’t know them if we fell over each other.

It’s really just me and my 3 siblings and their families.
When we would all get together there would be upwards of 20 people. The occasional new boyfriend/girlfriend or a lone friend that had no where to go for the holiday. We always welcomed extra guests as there is always enough food to feed an Army

Now, over the passed few years people have moved and there is no where big enough for all of us to gather. I’m in a tiny apt. Those of us willing to host just no longer have the space and others never seem to offer

We were renting a room at a local restaurant for a few years but, now they have closed. There was no gathering at all last year due to Covid and I believe this year will be much the same as again … no one with space has offered. I’ll be dropping off my sister and brother in laws gifts tomorrow. Since they are 2 hours away.

Sort of makes me sad there is no big gathering anymore for Christmas breakfast.

Tomorrow is just me and the man, with my two sisters, one hubby, the other is working, 2 nieces and one nephew. One of her daughters lives in NC and the other is still at Canton. She chose to stay and make a Thanksgiving dinner for exchange students who have no where to go and don’t know what our Thanksgiving fare consists of. She is such a sweet kid

I won’t see my brother’s side at all. We never have on Thanksgiving as they have always gone to her family.

It makes me a little sad. But, I try not to wallow in the “old times” but, the memories are still nice to think about now and again

Same here RKK. Everyone is gone except a cousin out your way and an aunt down in Florida. My dad’s entire family is estranged and I wouldn’t know em if I met em. Sorta miss the big dinner at Grandma’s (mom’s mom) but the fond memories are there.
Just me and my sister this year.
Hug em while you got em

I arrived at the tail end of my family. Both my parents were last in their families too. My remaining grandparents were all in their late 90s when I was a little kid. I barely remember them. My parents are gone now, as are two older siblings. My cousins were all 20 or 30 years older than me, and I never really knew them. I have no kids but have many nieces and nephews (some older than me). However, they’re off doing their own things with their kids and, yeah, grandkids.

This is where marriage comes in. Mrs. Just B has a sister in town, so we spend most holidays there. We skipped last year due to covid. This year, we’re all vaccinated, some are boostered, and I guess we’re ready to take a chance. I’ve spoken to so few people in a group setting during the past year that I’m a little antsy about the whole thing. I’m all prepped for my usual things to say about refusing to eat turkey, but I’m a little rusty at it this year.

We had a lovely time at my mom’s house with the family, and the food was delicious. Now, my lovely and understanding wife is giving her introverted husband some time alone to decompress. She gets it as she has introversion tendencies, too. Not getting on the scale tomorrow.

The scale is in the closet until February, LOL!

I’ll check on Saturday. But tomorrow? Not a chance.

When I got home last night I melted into the couch. I was completely exhausted. I finally got the strength to make a cup of tea and then melted into bed

It was a long day with the near 2 hour drive both ways … but we had fun and good food.

I might have to get a small turkey breast and bake it this week. 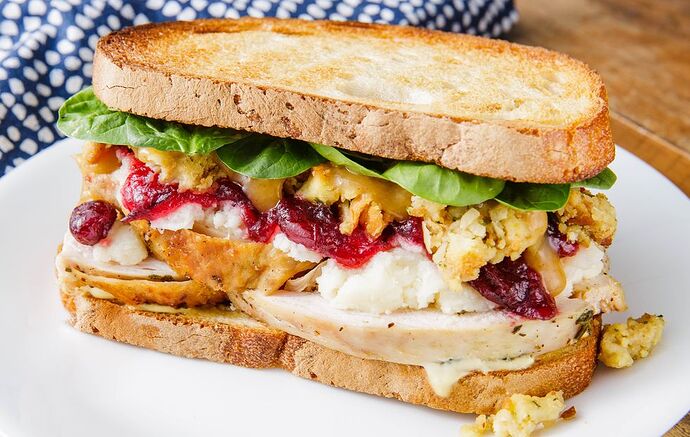 I made a salad for lunch and tossed in some chopped turkey. After eating rolls, stuffing, regular potatoes, sweet potatoes, cranberry sauce, and mac & cheese for both lunch and dinner yesterday, my body was like, “Yeah, I’m good on the carbs and sugars for a few days, thank you.”

I actually made a gargen burger tonight

When it comes to plant-based meat, I am the biggest skeptic.

First, I’ve had it in the past and it was baddd.

Second, its over priced and not very budget friendly.

Recently I’ve been hearing good things about Gardein. These were just over 3 dollars for a bag of 4. That is a pretty good price from what I have seen. I figured I would try them. I have to say they were not bad at all. Especially if you have eaten frozen burger patties. They are pretty close. At least I thought so.

A meatless meal here and there is never a bad idea.

I will be getting these again and I might even explore their other types of goodies. 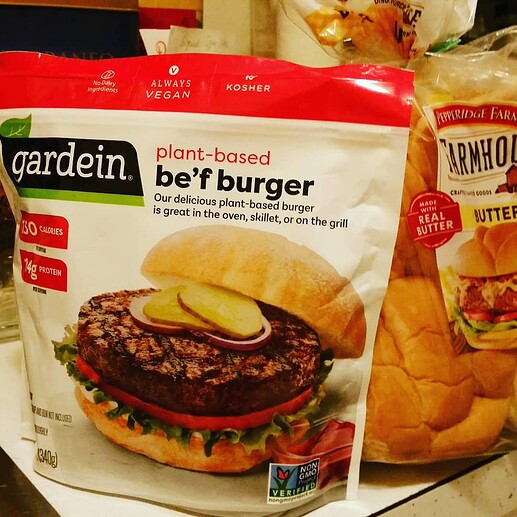 They were quite filling! I know not to make a double decker next time. One was plenty. 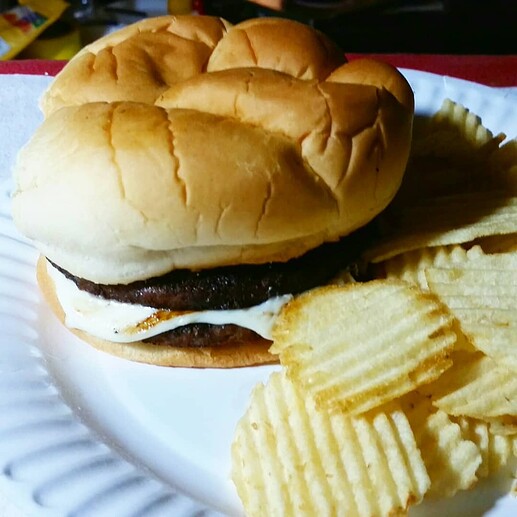