Have you ever been sued?

Was leaning about contracts today and came across a story of someone being burnt down the track for not putting crucial details in a verbal agreement about a project in writting and it made me wonder how commonplace it is for things to go so far awry in our industry.

Have you ever had a project go so wrong with a client that it ended up in court?

Part of business these days is being sued. That’s why I always recommend that any freelancer do whatever is legal in their country/state/city to separate their personal assets from their business assets.

Usually being ‘sued’ is something like a C&D or a cash in on a warranty, or a notice of non-performance. It rarely ever gets to the court stage. My often used example of this is a billboard I saw once that the designer had made such an egregious error that it came down the next day. Someone had to pay for that mistake, the print, the install, the de-install, the new print, the reinstall, and quite possibly the missed calendar slot on the billboard frame itself. The client would go after the designer and/or print company for that expense, usually by stating their displeasure. That would be considered being ‘sued’ for lost revenue. Sometimes you can push the expense down the line, and multiple people end up being ‘sued’ until the source of the original error takes care of it. I’m being vague because we’ve been in many positions along that spectrum. It’s all in good fun though and no one loses an eye. Usually.

Look at it this way, no client is going to spend money on something that is substandard. I’m not sure what you mean by ‘crucial details’ but missing a due date, delivering something less than described or sampled, errors in judgement, promises not kept, etc. ad nauseum all are opportunities for a client to call you out. Most will do it nicely. Others? Not so much. Sorta depends on the damage done.

So beware of verbal agreements. If they happen after the contract is written, that’s called a change order and submitted as such. Sometimes even if it doesn’t affect the bottom line price, if it changes any of the written details of the original contract it should be noted. Due dates for deliverables from both parties need to be stated. Completion dates need to be in there as well as any caveats. Sometimes we don’t even put in hard dates, more like a “your prints will be done within 2 weeks of approval of final proof” - because I’m not going to get saddled with only one day of production to hit a due date if there are 15 file resubmittals while you change your copy after receiving your print proof.

I was in court two years ago being sued for 10k - I won and they had pay to me damages.
It was only small amount so wasn’t that worried about it.

ever had a project go so wrong with a client that it ended up in court?

What happened was they supplied a file that was not going to work - it had issues.
We told them. They sent back a revised file that still had issues.
They refused to fix it. We told them it won’t work like this - they insisted in going ahead.
Personally, I got a RIPPED proof that showed the issue, sent it to them, and got an email back in about 2 seconds that said that’s fine go ahead.
They didn’t even look at it.

It didn’t print right. 4k of print down the drain and a complete waste of everyone’s time.
They decided to sue us for the loss and the loss of earnings from the print.

But we had comprehensive emails detailing the issues, how to fix and asking to resupply the files. And we also had the golden email - ‘Attached is the RIPed proof you can see the issue that will appear in print - do you wish to go ahead with this or would you like to supply a new file?’

I have one of those going right now. A rather spendy project and a lot of the image resolution is too low. I’ve pointed out the issues. Ball’s in their court.

Yeh the judge tore into them. I was covered and it was in the contract.

No one has ever sued me for design work. I’ve received a few threats, but the other people mainly were just blowing off steam and knew they didn’t have a case.

Unrelated to design work, but I had a business threaten to sue me about a month ago over a bad review of his company I left on Google maps. I removed the review since it wasn’t worth the hassle.

In addition, about 15 years ago, I started up a hunting and fishing forum (even though I do neither). It grew quite large, but the bigger it became, the larger the headaches were. Hunters aren’t as well-behaved as graphic designers. They were always making violent threats and spreading various kinds of lies. Luckily, in the U.S., forum owners can’t be held liable for what other people write on their forums, so none of the lawsuit threats went anywhere. However, I still needed to keep an attorney on retainer to deal with legal threats and law enforcement officials. I finally sold it and washed my hands of it all.

At the beginning of my career, I sued two freelance clients for non-payment and won both times. Unfortunately, neither of those people ever paid. Collecting money from professional deadbeats who make careers out of not paying their way through life know how to work the system to their advantage. I learned a valuable lesson from both, though. Since then, I’ve carefully avoided people who seem sketchy and require payment in advance from anyone who seems the slightest bit suspicious.

Have you ever had a project go so wrong with a client that it ended up in court?

No. I’ve had projects go wrong for all sorts of reasons. If it was my fault, I’ll try to make it right, usually by offering credit towards future labor or printing. A solid contract and good communication can prevent bad things from escalating.

Since then, I’ve carefully avoided people who seem sketchy and require payment in advance from anyone who seems the slightest bit suspicious.

Same. There are some people who are very cavalier with their threats of lawsuits. My dad used to say it was like them waving a gun. It’s great if they decide to NOT shoot you, but them pointing a loaded gun at your head is reason enough to dismiss them as a client.

I’m concerned lawsuits could be weaponized to eliminate rising competition.
so I have been vigorously researching every type of “legal trap” there is…
as a preventative measure., I might not have the resources to
play defensive once it’s too late…

as a preventative measure., I might not have the resources to
play defensive once it’s too late…

For this reason, most professional designers keep 2 types of insurance: General Liability and Professional Liability. Together, you get coverage in case a client is unhappy with the advice you’ve given, or if they accuse you of slander or libel, or if you don’t deliver a design by a contracted deadline and they suffer financial damages, or they visit your place of business and trip and injure themselves… If someone sues you, you contact your insurance company and let them deal with it.

The Graphics Artists Guild Handbook of Pricing and Ethical Guidelines has sample wording you can use in your contracts.

They’re not going to sabotage you. They don’t know who you are, and they don’t care.

I’ve been sued not very successful for the opponent.
I sort of sued a former supplier with an ok outcome.

I try to be careful without getting paranoid.

I’m not sure how everyone here even makes money.
I can’t even get someone to pay me.
it’s just been none stop volunteering, free labour,
idea theft, and scamming for years now.

I think it’s a bit ironic that I could be sued for being a day late
on changing a Facebook cover photo,
when businesses are all stealing weeks of work,
and profit from it without any consequences.

Mike Monteiro - F*ck you, Pay me

He was required reading in college.

I’ve always been told to require half up front and final payment before delivery. I did that on the small amount of freelance work I’ve done. I’ve also walked away from jobs that seemed sketchy and I always use contracts. I like working for an agency where an account rep has that particular headache.

I say “no” significantly more often than I say “yes”.
To customers.
To suppliers.
To ideas.
To budgets.

But the ratio changes over the years in favor of “yes”. You learn. Customers learn.

A little off topic:
A wonderful film about communication design and saying “no.” 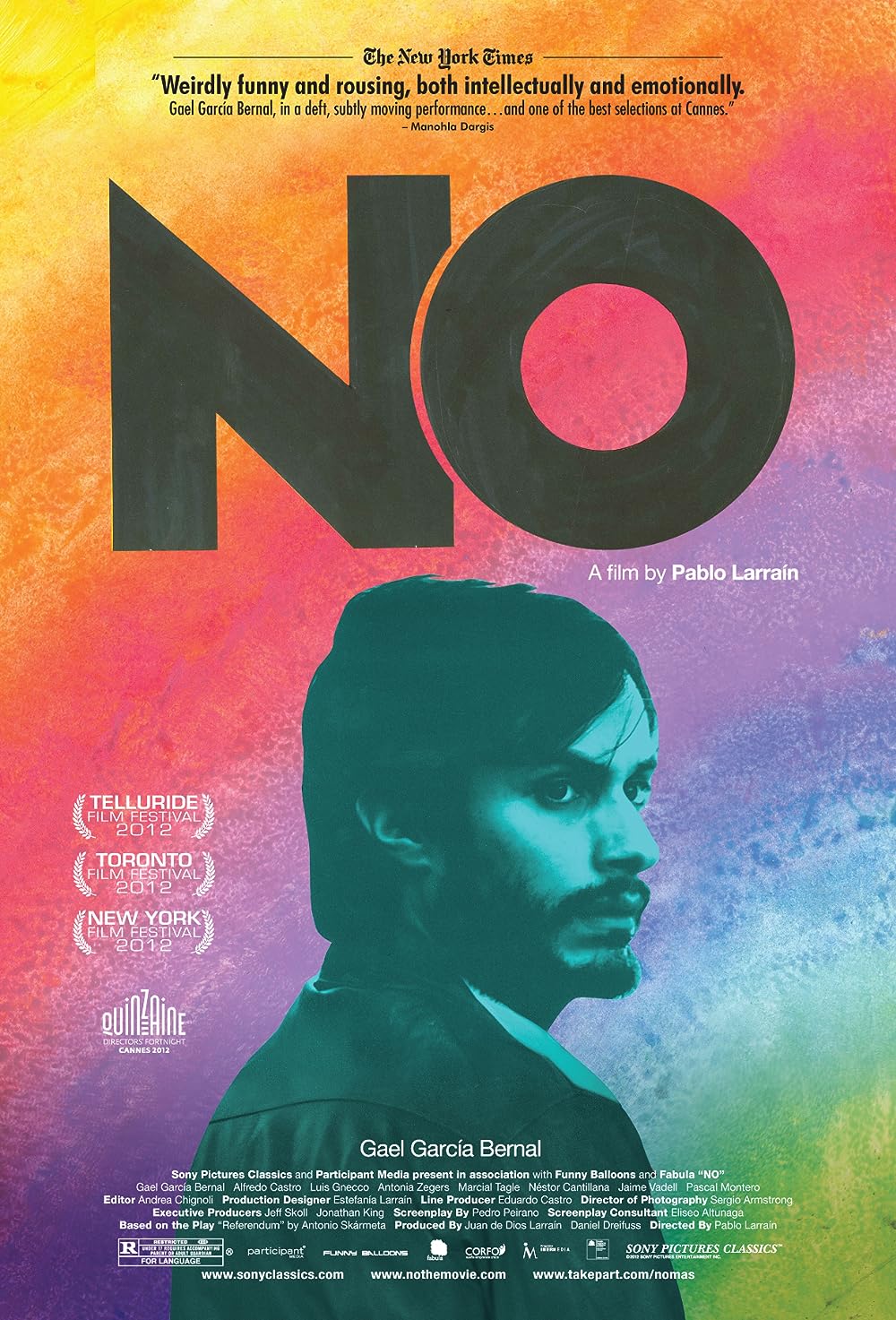 No: Directed by Pablo Larraín. With Gael García Bernal, Alfredo Castro, Luis Gnecco, Néstor Cantillana. An advertising executive comes up with a campaign to defeat Augusto Pinochet in Chile's 1988 referendum. No is a 2012 internationally co-produced historical drama film directed by Pablo Larraín. The film is based on the unpublished stage play El Plebiscito written by Antonio Skármeta. Mexican actor Gael García Bernal plays René, an in-demand advertising man working in Chile in the late 1980s. The film captures the advertising tactics in the political campaigns for the 1988 plebiscite, when the Chilean citizenry decided whether or not dictator Augusto Pinochet should stay in power for another eight...