How are typographic logos created, how is the grid

Hey, guys! I have a very big doubt regarding the creation of typographic logos.

How do I calculate this for different project types? If anyone can exemplify or recommend studies, I would be very grateful.

I wanted to create a logo for a client that was typographic, and I would like to develop grid letters like the ones that appear on pinterest. As in the example below.
However, I still have little knowledge. Anyway, what do I need to learn to start using grids correctly when creating logos, whether they are from different projects? 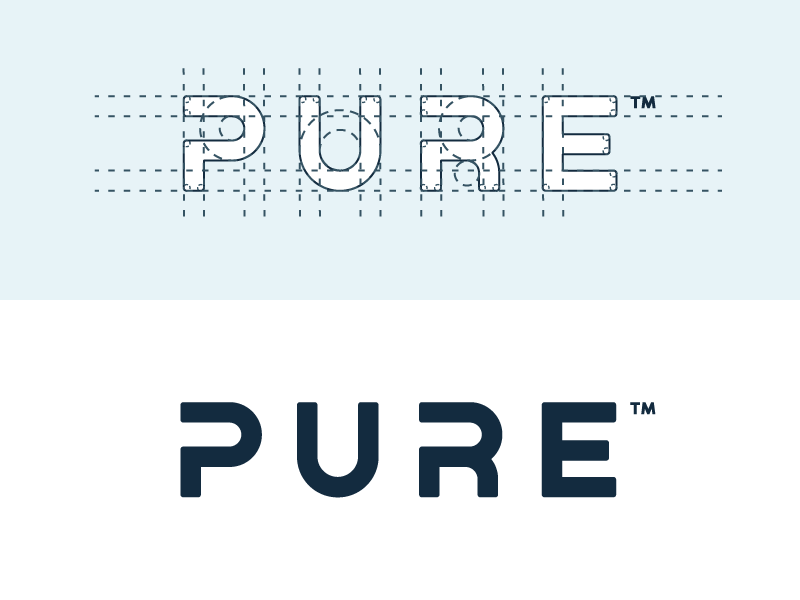 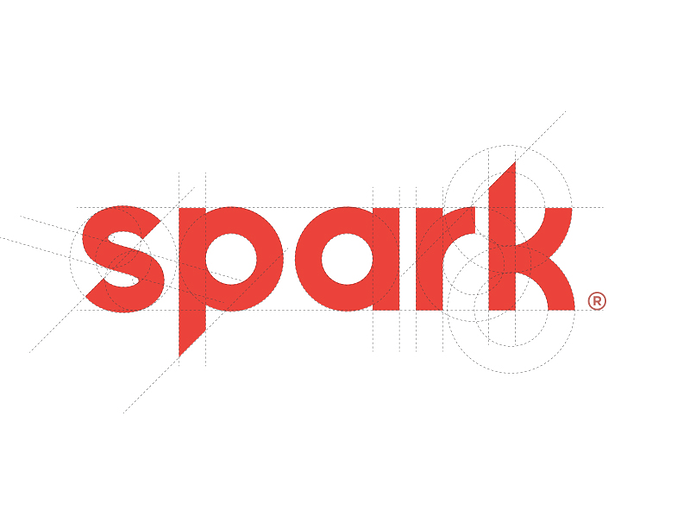 You cannot – and should not – ever think about designing type in this way.

Using contrived construction lines in this way when designing symbols and graphic elements has become quite a fad recently. It is like some sort of pseudo-intellectual subterfuge, employed in order to create the illusion of complexity, when, in fact, it only serves to reduce design to some sort of paint-by-numbers exercise. It’s wrong and it doesn’t work.

Bad enough, used on graphic elements, but when used on letterforms, it’s not only fake, it is downright misleading and uninformed. The design of typographic glyphs is far more complicated than can be reduced down to a simplistic set of geometric construction lines. No matter how neat and tidy you may want to appear, iIt isn’t.

There are all sorts of optical compensations required in the design of letterforms. Glyphs like Os cannot be simply constructed with concentric, neat, mathematical circles.

Because of the way we perceive shapes, horizontal and vertical lines of exactly the same width, appear different, so this has to be allowed for. Spacing of letter pairs (kerning) is also not mathematically quantifiable. It requires years of learning, understanding and no small amount of skill.

If you learn even the most basic elements of type design, you will quickly begin to understand how ridiculous creating letterforms in this way is.

Somewhat depressingly, it is yet another indicator of an industry becoming saturated by alacrity and ignorance in equal measure.

Apologies if that turned into somewhat of a rant. You hit a nerve. However, it is not unmerited. Day in, day out, we see examples of this kind of degradation of knowledge, skill and craft purporting to be exactly all those things.

Practically, I’d suggest going and studying type design. Learn from the greats and start with the origins of type, right back to brush and pen scripts, through to the origins of movable tyoe. That way you will see why you can’t simplify and, pseudo-intellectualise a very skilled and complex craft.

Those layouts with those kind of after-the-fact grids always make me laugh.

A typical font consists of several hundred glyphs or more. Almost all of those glyphs evolved over time — some of them over 2,000 years old. The basic forms are almost random. Making these random shapes match each other depends on identifying commonalities between the glyphs and imposing similar design motifs upon those shapes (for example, matching serifs or stresses).

Making all those hundreds of random shapes match in both form and personality is difficult in an entire font. Another way to help them match is to develop a grid of sorts. But out of necessity, that grid must be very flexible. The various glyphs still need to conform to their basic shapes.

With a wordmark, that task is much easier. Instead of hundreds of shapes that need to match, only a handful of letters are involved.

There are only four letters in the PURE example you provided, all of them similar. Each takes up the same amount of space. The ratio of negative to positive areas in each is roughly the same. And the spacing between each of the letters can be the same since there’s no need to kern them differently since each letter shape plays well with the letter next to it. In addition, there’s a P and an R in the four-letter composition. Since an uppercase R is, essentially, a P with a leg attached to it, the designer used the commonalities between these two shapes to help define a rhythm within the overall shape. Even the counters within those two shapes could be stylized to match, accentuating the rhythm.

The designer who created this wordmark recognized these similarities between the letters and developed a grid they could all fit within. The grid would not work if the wordmark contained an A, J, or an L. In other words, this particular grid worked because the combination of letters in the mark allowed it.

The spark example is very different. Unlike the PURE example of relying on tight conformity to a grid to create a cohesive composition, the designer constructed the letters from matching geometric shapes and angles to provide design cohesion.

In other words, the designers recognized what was possible within the letters that made up the words then built upon those possibilities to bring compositional order and harmony to the overall shape and personality of the wordmarks. The designers did not start with predetermined grids. Instead, the designers looked at the letters and recognized that compositional harmony was possible by leveraging the similarities between the letterforms. In the case of the PURE mark, a tight grid was doable. In the case of the spark example, similar geometric shapes and angles made it possible.

I won’t point them all out since this post is already getting too long, but I’ll mention a couple of the most egregious problems. Both are due to the letterforms being coerced into compliance with the grid or the basic shapes.

The s in the spark mark has significant problems. It’s geometrically accurate in that it’s constructed from rigidly adhered to basic shapes. Despite its geometric accuracy, it looks off. It appears to be rolling over backward because an optical illusion makes the letter look top-heavy. The bottom half of the letter seems too small to support and balance the top half. Consequently, it appears unstable, as though it’s ready to roll in one direction or the other. Since the weight on the top half of the letter seems to be heavier on the left side, the letter wants to roll in that direction. Fixing this problem would require deviating from tight adherence to the geometric shapes and altering those shapes just enough to counteract the illusions.

The p, a, and r in the spark letter contain other optical illusion problems. Despite them being geometrically accurate, they don’t compensate for the bulkiness created in those areas of the letters where the curved segments blend into the vertical strokes. Fixing this problem involves altering the shapes to make them geometrically inconsistent but visually balanced.

Below I’ve quickly drawn two lowercase letters. The first is geometrically accurate and composed of two simple geometric shapes. I’ve altered the geometric shapes in about a half dozen different ways in the second. These alterations shift the weight balances around to counteract various illusions to make them more optically balanced. The third example shows them overlapped to show how they differ.