How do I know how far I can go before Copyright is an issue?

Hi, I was wondering if anyone had experience with copyright laws

Cheers and thanks for the help! 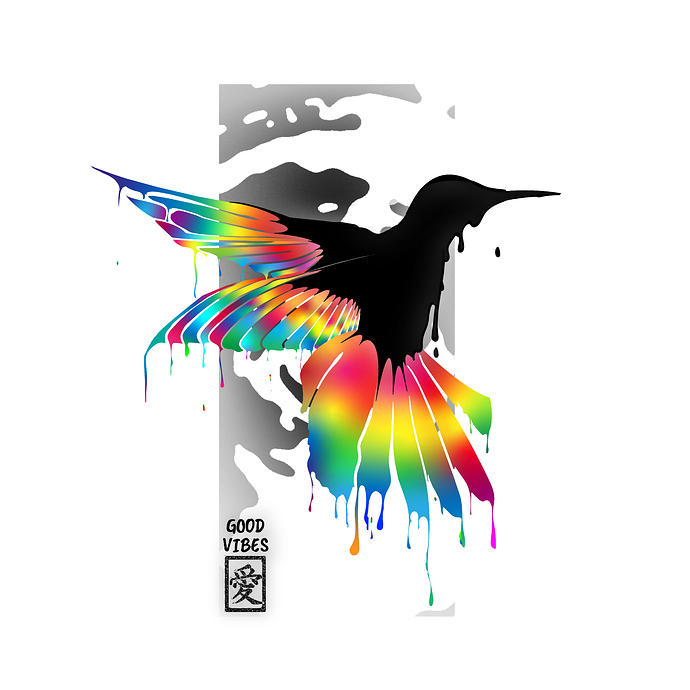 I am not an expert in this area, but given that, by your own admission, you took that piece and amended it, no matter where you go with it, it surely has to be considered derivative.

As far as I know it is only if it is independently and coincidentally similar, you wouldn’t be infringing copyright. If you have taken a known work and adapted it, it has to be an infringement. You only get to claim copyright for original work, not piggy-backing.

From what I know, the only way you could get away with that, is if you were purposefully mocking it. You know, like TUNA with the PUMA logo. Or does CSpencer allow people to do whatever they want with this work? You could ask… (though it’s a bit optimistic).

The truth is, you’re not likely to get into trouble unless you make it big somehow. On the other hand, if you made it big and then someone started copying your work, you’d probably be a bit annoyed too. Maybe think about it from the other point of view?

Finally, sometimes, we are inspired by the work of others. It can’t be helped. If that’s the case often with you, you could consider studying works which are out of copyright already. Then you don’t need to worry!

If you really really want to go ahead with this, then maybe get a picture of another bird… which is copyright free, and the do this on that. That might be ok though I repeat that I’m not an expert…

I’m sure someone who really knows will come and comment soon enough!

i had my comic used in a a book cover without my consent in the 90’s and their defense was using 8% of the entire graphic, i can find the letter and cover later today if that is helpful.

Yeah, I mighta fought that 8% a little harder, myself.
Derivative is derivative.

There’s no cut-off point at which something stops being derivative. For that matter, everything short of a complete accident is derivative of something. Lots of figures float around for derivative artwork being OK if XX percent is changed, but there are no percentages that make something safe or unsafe to do.

In the end, everything is a risk, but some risks are so remote that we take them without giving them much thought. Most every illustrator uses found photos for inspiration. Your illustration is so different from the photos that I see very little similarity, and I suspect few others would either.

If you were to submit this as a stock illustration to Getty, they would want to know if you have rights to the original photo, and since you don’t, they would reject it. Too similar to someone else’s work, and obviously derived. Just saying, that’s their standard.

The proper way to go about this would be to see if the photo is available as Royalty-Free, and with a extended license that would cover what you are going to do with it commercially. Or as Rights-Managed, in which case you would negotiate with the photographer or their agency for your specific use and print run. This would be more expensive.

Where you say this came from someone else’s art, you obviously lifted it. The same drools, the same coloring, even though vector. Sorry, nope.

MrChoob said his illustration was based upon the first images called up in Google with the term rainbow hummingbird. Doing that, this is what I see.

My comments were based on what I thought was an original illustration drawn using those photos for reference, which I think would be OK. Looking a little further, there are also dripping hummingbird illustrations a bit further down the page, which pushes things further than I’d be willing to say is OK.

So for instance if I got features from other hummingbirds and incorporated their features into the drawing that would be ok? Is it the rainbow feathers cause the copying or the shape of the bird? 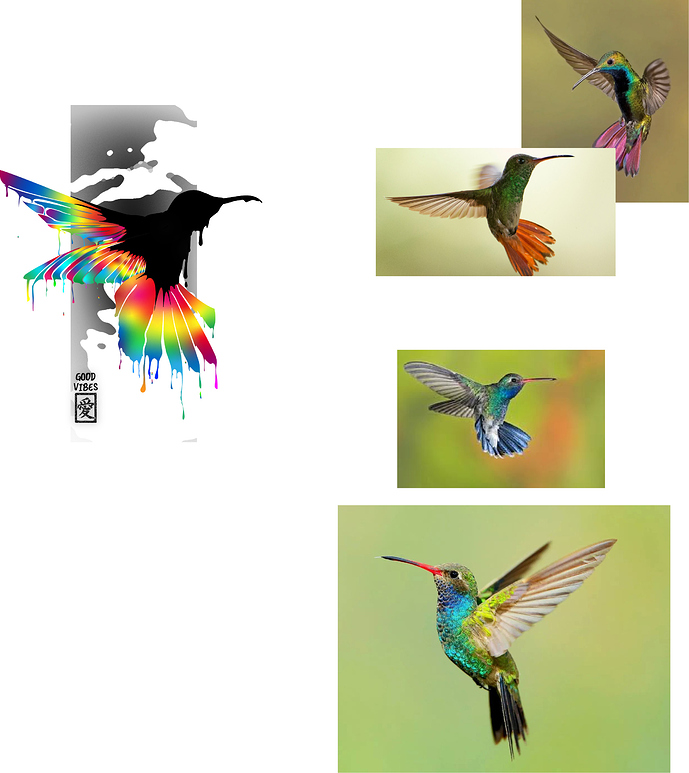 That would be helpful! I just want to get my understanding of whats infringement and whats not, correct. I feel like legal issues would be hell.

I see you got the leader tag so you probably have experience with this. Legally is there any simple rules to follow that would allow me to say that my artwork can probably be sold. or is that just being stupid and I have a chance of being sued no matter what I put out?

I see your point that there are already a few dripping ink hummingbirds, but the dripping ink is an art technique that is readily used.

If you search up dripping ink animals in Google there are lots of examples. Can the technique actually be considered infringement?

This is what I got on a Rainbow Hummingbird search.
The 4th image is the one I thought you were referring to.

Legally is there any simple rules to follow that would allow me to say that my artwork can probably be sold. or is that just being stupid and I have a chance of being sued no matter what I put out?

I’m not an attorney, but…

Most copyright laws were developed during a time when things were easier to divide into black and white categories. Today, especially with digital works, the gray areas likely occupy most of the space.

Yes, there’s a chance of being sued no matter what. The judge might toss it out of court if he or she thinks the suit has no merit, but if someone thinks you infringed on his or her intellectual property, that person can sue you.

Would you be sued over what you’re proposing? Probably not. If someone did sue you, would they win? I don’t know. What I do know is that win or lose, it would be a huge, anxiety-producing hassle.

If you search up dripping ink animals in Google there are lots of examples. Can the technique actually be considered infringement?

I don’t think painting drips could be considered a technique. It’s the way in which the drips are painted that would constitute the technique. That’s arguable and sort of beside the point, though.

The thing we’ve sort of ignored in all of this, however, is whether or not it is ethical. People combine bits and pieces all the time in all kinds of ways to create new and better things. I’m not so sure yours is all that new, though. I like what you’ve done, but it’s more of a reinterpretation than an original piece of art.

It’s certainly a nice illustration, but I think you might be trying to justify and rationalize something to be OK when you’re not quite sure of it yourself. Whether you’ve gone too far in appropriating someone else’s ideas is for you to decide. If it were me, I’d likely back away from it a bit and, at least, get rid of the more obvious appropriations, like the drips (which just might be my least favorite thing about it anyway).

Thanks that’s a really thoughtful answer.

Personally, I’m more looking to rationalise what’s ethical and legal in terms of art so that I don’t create something that would offend others. My understanding is that pretty much everything in art is considered to a certain degree derivative (including music, film, ect) and therefore creating something truly original is like finding a unicorn.

I guess my purpose is to figure out what is the boundary for what is considered inspiration and what’s considered copying. For instance:

A man sitting on a bench but in banksy style would that be a infringment on his style? Would it be accurate to say his style may be an infringment on previous stencil artists?

If I see an photographed animal in a certain pose can I use that pose? There’s limits to how many orientations a animal can be photographed at isn’t there?

If I see an illustration technique I like can I use that technique to create a different subject matter?

If I see a certain composition that I like but use different subject matter is that infringement?

If I draw a Dalmatian from a photo but change the orientation of the spots and background is that infringment?

I know this topic is a grey area and appreciate the help trying to understand it. Thanks. I want to put this shirt up in my store, it’s true but not if it’s against ethical standards (won’t make much money off it anyways most likely)

Honestly didn’t take any inspiration from that one. The idea for inksplatter came from some Instagram and Pinterest posts

I thought Just B put it together really nicely, and of course, you make good points yourself. All these points are valid, and depending on who’s considering what, the outcome is to a certain degree random.

That case with the Marvin Gaye family winning over Pharrel and the other guy, I couldn’t understand that at all, yet it happened. Then those two Christian boys won against Katy Perry. That made more sense, but was still weak in my view. At university, I remember a lecturer telling me that under 10% was ok. Yet Vanilla Ice had to pay out to Queen for using their riff (after he got famous and made lots of money). It’s all a bit random.

If I had to call it, get another bird, change the dripping, make another tee, put it on your site, and forget about it. If you’ve made so many changes consciously, that’s an effort not to infringe. Does it mean you were knowingly infringing to begin with? Yes, and so you tried not to… who knows how the judge will see it?

The likeliest outcome is nothing will happen. If the t-shirt is a huge success, you might have to give a bunch of your money away. Write it off as a life lesson…?

Thanks for the reply! The effort not to infringe is an interesting point! However, that would create a few situation:

I have heard about the 10% rule but I don’t think it applies all the time nor is it legally binding. Personally reading up on the subject and reading on different court cases it depends on if the artwork is transformed enough in concept and use (and in a lot of cases if the profitability of the original was affected).

I might just end up posting it and see what happens, if i get sued like you said would just be a life lesson.