How to add Anchor to JPG/PNG IMAGE?

Hello and a warm greetings to everyone! I am very new to this forum; joined today and I am also just a beginner and learner to graphic design. I am using Edraw Max software and in which I am finding it difficult to change the shape of jpg/png image as per my need because I am unable to add anchor to it ( NO OPTION TO ADD ANCHOR TO ANY IMAGE ) hence I can’t move or change the shape of it as per my choice. Can anyone know how to do this in Edraw Max or is there any way to do that? Your inputs, guidance is highly appreciated with deep gratitude!!
Raj

What is Edraw Max?

Hi, Its a all in one graphic design software. Unfortunately I am unable to attach the link of the software.

Edraw is a relatively obscure but well-regarded diagramming application. It is intended for diagramming workflows, organizational charts, floor plans, process maps, etc. While it could be a useful tool in very particular types of graphic design, it wouldn’t be considered a primary graphic design application, and this may in fact be the very first time it’s ever been mentioned on this forum. In that sense, it’s doubtful you’ll find anyone here who can advise you on the details of editing tasks that are specific to Edraw. That also leaves the framing of your question somewhat cryptic, as “adding an anchor” isn’t a universally-known concept, and technically speaking you cannot “change the shape” of a raster image.

Hi , Many thanks for giving clarity about Edraw. So is there any other software in which I can modify or change the jpg/png image by moving its anchor as per my requirement? Is Ai Adobe Illustrator will help me then I will think to buy it or is it possible in Coral draw graphic suit?

modify or change the jpg/png image by moving its anchor

Well again, “anchor” is not a universal concept in relation to raster images, so it’s not really clear what you’re asking when you ask how to “move its anchor”. What exactly is “its anchor”?

I’d be guessing @btgraj intended to distort the image?

Hi, sorry for the inconvenience , it might be because I am new to this industry so I think I not using the right words to describe my issues. I AM UPLOADING SCREEN SHOT OF WHAT I AM DOING AND WHAT I AM LOOKING FOR. 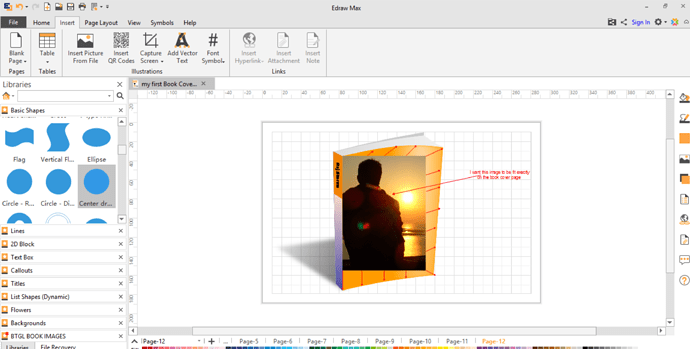 Hi, …something similar to distort…I wanted to change the shape of jpg image something like shape of opening a book front cover… 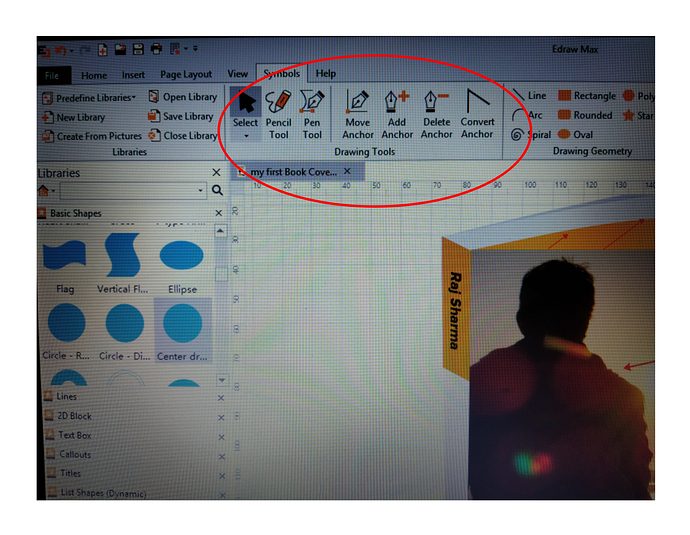 The tools you circled there are vector editing tools. As you’ve discovered, they’re of no use in distorting a raster image. (I assume you discovered that; I actually don’t know anything about Edraw feature sets.)

@HotButton… Yes, you are right; Edraw doesn’t help in distorting a raster images and that’s what I was struggling with it. While looking for solutions to this issue last night I saw some YouTube videos in which Adobe Illustrator have some function to distorting raster png/jpeg images by converting them into vector images. So now either I have to buy Ai and or Ps to do that. many blessings for your valuable time and guidance ! Thank you !!

Adobe Illustrator have some function to distorting raster png/jpeg images by converting them into vector images.

This is a perfect example of how information found online can lead the under-initiated in the wrong direction. That Illustrator feature, “Live Trace/Image Trace/Auto Trace” isn’t for converting photos to vectors so they can be distorted. Some might disagree, but I’d go so far as to say that automated vector tracing of raster images has no place in a professional graphics workflow. There may be some artistic applications to justify its existence, but in principle, raster images are best left raster images. Illustrator does allow skewing or “shearing” of raster images, but the deeper functions of its Free Transform tool don’t work on them. Actually, in my workflows raster images and Illustrator only mix when I place a photo or scan to use as drawing reference, after which the image is deleted.

Another nit I’d pick (not just with you), is the mixing of terms; “vector” and “image”. Maybe it’s just me, but if accurate language is important (to me, it is), “vector image” is a contradiction. Technically, when vector objects are rendered to screen, you see an image of vectors, but otherwise the two constructs are mutually exclusive.

something similar to distort

No. You wanted to distort the image.

@HotButton; @HotButton: Thank you for your in-depth clarification on the subject of distorting raster png/jpeg images on Ps and not on Ai. Luckily my daughter having Ps software and I have shared with her what you have explained. Now she is distorting it for me and she also completely agree on what you have suggested. So indeed your knowledge and experience helped me to resolve the issue and thanks again you for fantastic explanation of right terms; “vector” and “image” and the accurate language. Many thanks and blessings!!

@Eriskay; Yes, you are right I wanted to distort the image. Thanks for correcting me!

I’ve done something similar in Photoshop using a 3D rendering of a book and “wrapping” the raster image around that 3D object. To do with with Photoshop software, you’ll need to invest funds to purchase the license and learn the process. Here is a short video tutorial that could help you with that process: https://www.youtube.com/watch?v=IdH0VR8tesE

If you need something really simple with no effort or investment, you may want to try this tool: https://diybookcovers.com/3Dmockups. Be warned, this tool has limited capabilities, and does not output high resolution or specific dimensions. It is better at creating an image that is a proof of concept rather than something to use professionally.

Wow… !! both the links are amazing.Thank you so much !

you can ‘map’ an image to an object in Illustrator too.

Using Illustrator to wrap text or objects around a sphere By Adriana Marin The world is round, so we’re told. If you’re used to using Adobe Illustrator

I also forgot to mention Adobe Dimension, which is Adobe’s tool that is specifically designed for this purpose. If you subscribe to Creative Cloud, the this app is already included.