I need to understand a system grid

Hello friends! I’m looking for advice!
I need to use an existing grid system to my designs. Attached is the system grid instructions that I need to follow.

I had been recommended to apply a 6 column grid system.

Can you read the document I am attaching to tell me if you understand how to apply it to my existing measurements ?

Thank you in advance 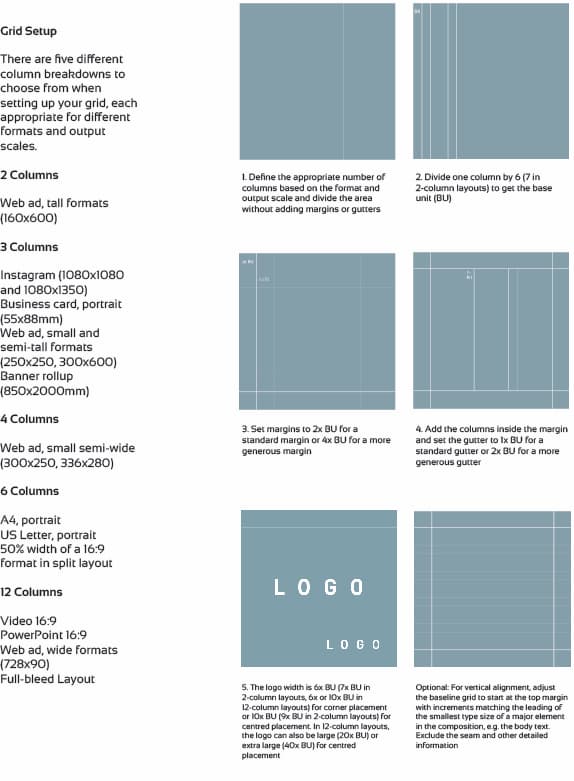 I think we’re lacking some context. What’s the story behind them and what are they for?

I need to apply an existing logo to a window display. I need to keep background work information private.

Is this something you can help me with?

I need to apply an existing logo to a window display.

I’m pretty sure you won’t need 6 columns for that. None of the generalized grid system information in the image you posted relates directly to that objective. I’d say nothing other than the physical specifications of that “window display” would be relevant.

If by window display you mean a dressed window, a grid isn’t going to help you. Need need to know the staged look in order to apply the logo in a meaningful and integrated way. Like a photo of the display.

If by window display you mean a total window coverage graphic film, knowing the rest of the content and the intent might be helpful there too.

Is there no one under the same NDA you can ask? Because we are probably not going to be able to help you. That image you posted is worse than stereo instructions.

Actually, if followed step by step they are fairly easy.
Take my interpretation with a grain of salt. In no way do I presume this is correct. And I would get whatever you do approved before producing.

Here is a sample of the window display…
I had been told to follow the grid system, and recommended to follow the 6 column.
Could you show me the process and calculation how you think it works?

I appreciate your feedback… 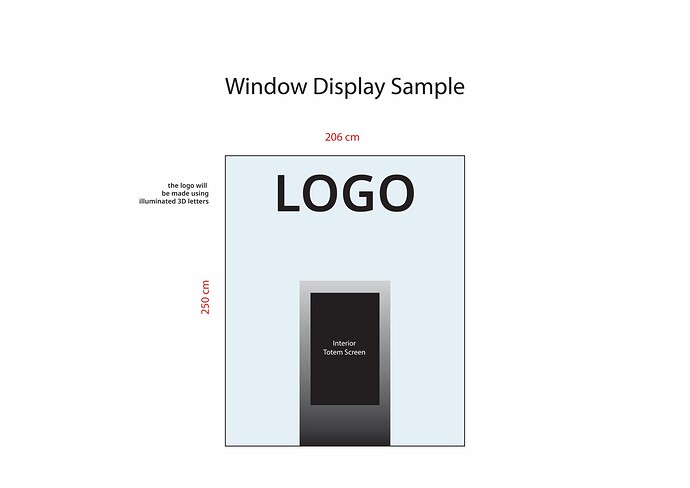 Nope. I did my part to simplify those operating instructions.
You figure it out.
It’s part of your JOB.

There is no need to be rude. You haven’t simplified the system, I can also follow it more or less.
if it would be so easy, I wouldn’t be here.

I had been told to follow the grid system

By whom? You have a choice to make; 3 options:

Could you show me the process and calculation how you think it works?

Without seeing the logo, no.

And, if I were to tell you how I’d do it, there would be no 6 columns, imagined or otherwise. I’d find the sizes of the pre-existing elements and make design decisions about the size and position of everything to be added via my design based on instinct, simple math, viewing distances and angles, and whatever physical latitudes or restrictions the site affords or imposes. Then I’d collaborate with the maker of the “illuminated 3D letters” to execute it properly per my design, factored by their material and production specifications.

Are you literally just placing a logo and no other content on a large backdrop to an interactive touchscreen? If so, a grid is essentially useless. Grids are more to align multiple elements (icons, logos, photos, text, text callouts, shapes, etc.)

Unless I’m not understanding this, it should simply be a matter of resizing and placing your logo in the space above the interactive touchscreen in a way that is visually appealing. Not too large, not too small.

Seriously. Having different minds, helps me become confident and understand I am on the right track. The main reason I wanted to understand how it works is because I am curious and I hope to apply it to other designs.

Thank you for your support.
I will send you the design with the logo later

Awesome, thank you for your feedback.
I am keeping note of everything.

This is a long-ish read, but IMO it helps explain the benefits of a grid and how and why to use one.

Wait, the logo is going to be made of “illuminated” letters?

Before you even start considering a size, you have to define that.
Cuz depending on the logo in question (the skinniness of the strokes, serifs and letterforms) you may have to make it much larger than you think to get lighting elements into the letterforms/logo elements.

Or maybe even incorporating a lightbox that allows push thru lettering, which adds a whole other element of physical clutter to the space available. Then, short of battery operated, consider where the power is coming from. Power cables are not invisible and the junction box or power outlet may already be in a specific place.

The grid system has no bearing on that. It’s all on how that logo is being lit and what the real world physical parameters are for that.

The images you supplied are confusing. They’re like a page pulled out of an instruction book that makes no sense without the information on the other pages.

We used a six-column grid at the newspaper where I worked years ago. We divided pages into six vertical columns. We aligned each column of text to multiples of the grid.

That’s not especially relevant to your window display, and as I mentioned, your examples fail to clarify the relevance of a six-column grid with what you’re designing. However, maybe all you’re asking about is what a six-column grid means. If so, divide the work area into size equal columns, then align the objects within that space to the grid lines. For example, resize and reposition the elements in the image below to line up with the red lines that mark the grid. 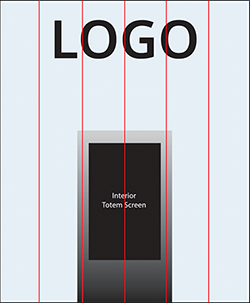 Column grids are vertical, but what about a horizontal grid (rows instead of columns). It appears that alignment to a horizontal grid might be even more important than a vertical grid, but you haven’t mentioned that.

Why a six-column grid is essential for your windows display is not clear. Your example shows two objects: a space for the logo and a rectangular object (whatever it is) at the bottom. Why do you need a six-column grid to position them? Dividing the window into thirds or sixths, then aligning the objects to those divisions is probably a good idea. But if that’s all that’s involved, you’re seemingly confused by vastly overcomplicating the problem with a bunch of grid instructions someone gave you that make no sense.

The grid guide above does make sense in that it is giving you a logo size based on 1/6 of a column width (and that 1/6 is dependent on the width of the substrate, a window in this case.)
It’s only a little different from using a letter or element in a logo to define the clear space.

Someone is suggesting 6 columns as the window is close to half a video frame proportion of 16:9

But I’m going back to my last post. Figure out how these letters are being illuminated, then base your size on what is physically possible to actually light it up.

Fantastic!! I saw this article a long time ago. I will read it again… thank you very much for your support.