I really need some feedback on my first project

The First one is for an entertainment website, which is more like practical for a friend of mine. So he asked me to make something like a logo that includes of a television that has headphones on, and is standing on something like an offshoot of a mountain but he hasn’t given me the name yet.
And the second is a logo for a graphic designer, so I just came up with something like this; please bear in mind that I’m still a beginner and this is my first project 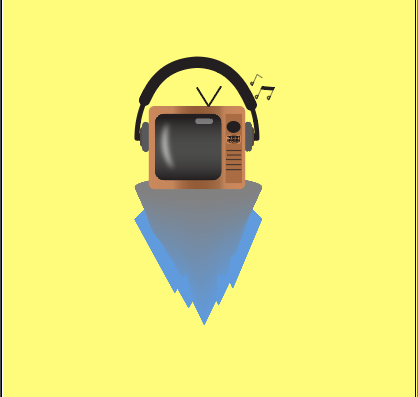 So this is the first and, 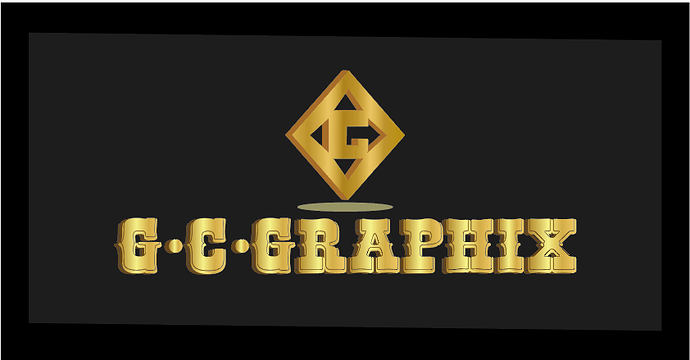 There are quite a few beginner’s mistakes here.
Starting with gradients, small stroke elements and way too much detail for logos.

The logo for your friend needs to wait until he can give you a name and a demogrpahic of his audience. You need to simplify and maybe not be quite so literal.

The second one, the G in a diamond color doesn’t match the text underneath and you have two busy elements competing with each other. One or the other there.

Logos should be vector. Even if these are online-only, I can’t tell you how many times over the years I’ve had to deal with the chin quivers when someone brings me a photoshopped website logo with too many photographic elements in it that have to somehow be translated into vector art for any number of reasons.

Thanks for the feedback, but for the first one I’ve already shown it to my friend and he says he is okay with it, infact he loves it because it’s pretty much what he asked for.
Next if I understand you correctly, the only thing wrong with the second logo is that the colors are contradicting each other, so I have to unite the colors together. And it’s saved in a jpg format that’s why it looks like that

I think what he means is that the gradient itself isn’t a vector but rather a rasterized image within vector shapes.

If the second really is a logo for a graphic designer, I’d question as to why I would hire someone that can’t make their own logo…

I know you said you are a beginner and its quite evident of that fact. I’m not sure of your market or the type of work your client does but I’d defiantly do another pass on the logo. Do you have any drafts or sketches of the idea?

Moreover, without being too scathing, I’d never hire a graphic designer with a logo like that. It completely belies their inexperience and lack of knowledge.

And the second is a logo for a graphic designer, so I just came up with something like this

I assume this ‘graphic designer’ is also inexperienced.

I understand that we all have to start somewhere – we all did. I happened to come across some of my student work the other day and I cringed.

Good on you for doing it, but really at your stage of the game you shouldn’t really be taking on live projects. You don’t yet have enough knowledge or experience to know how to visually communicate someone else’s ideas. For example, with your entertainment website; just because your client tells you what they want, it is part of your job to know what they need and guide them. It is not about them. It is about their target audience and speaking to them in the correct tone of voice. It is not uncommon for clients to think they know, but in fact have no idea how to talk to them. They will know their market, but they don’t necessarily know how to speak to them.

Are you planning on studying formally, ie, on an accredited degree course at a reputable university?

Please this is not a live project, I’m aware of My limitations and I never approached anyone as a client, I just needed something to base my design on. So this is just more like practical for me to test my abilities. I just need to know what is wrong with my logo and where I need to improve or if my knowledge is not sufficient enough, not just random criticism which I really appreciate though, but where am I not getting it right and what did I get right. Please I really need to know if you want to help me.

My apologies, I thought you’d taken this on as a live job. As often happens, it seems I grabbed the wrong end of the stick.

In terms of what is wrong, as others have said, gradients, vector vs bitmap. In addition, I feel you need to study and understand typography (spoiler; I’ve been at it, pushing 30 years now and I feel like I have just scratched the surface – it is a very big subject).

Typefaces have personalities and their own unique tone of voice. It is critical that you learn this, starting right from the very beginning, through the history of lettering and onwards to movable type, on to digital type. What you have produced has a few different voices from, Spaghetti Western General Stores, to 80s shiny spinning bling. It has very little to do with the tone of voice you would expect from a graphic designer. That’s without getting into the more subtle area of what kind of designer and who their client base is – both actual and aspirational.

Hope this helps in some small way

Thanks for the feedback, but for the first one I’ve already shown it to my friend and he says he is okay with it, infact he loves it because it’s pretty much what he asked for.

So you come to a forum that has many seasoned professionals, you say you “really need some feedback” on your projects, you get feedback, and then dismiss it because the client likes it? Why did you ask for feedback in the first place? If this is a post-mortem, so to speak, and you want to have your finished work evaluated, that’s fine. But take the critique, decide if you think valid points were made, and evaluate what you can learn from it. But don’t write it off because the client already approved it.

I just need to know what is wrong with my logo and where I need to improve or if my knowledge is not sufficient enough, not just random criticism which I really appreciate though, but where am I not getting it right and what did I get right. Please I really need to know if you want to help me.

Others have already done this, but it seems like you need it spelled out a bit more simply.