I’m wondering how everyone names and organizes their logo files when sending the final versions to their clients? Do you include the colour in the file name, tagline if there is one, orientation and how do you abbreviate things?

Looking for a better / easier way to name and organize logo files. I find the file names can be long and my way gets confusing sometimes for me and possibly the client. Considering I always send a variation of file formats. .eps .pdf .png .jpg .svg

I do something very similar to what you’ve shown. Yes, the file names can get a bit cumbersome, but you can read them and know exactly what the file is.

I do much the same thing, but I tend to abbreviate. Horizontal becomes horz. Pantone becomes PMS.

I don’t include the company name, though. I figure clients already know their company names and, anyway, the files are inside folders labeled with their names.

Most clients don’t have a clue what half of the file are for, so a long, self-explanatory name can help — even though it’s a little cumbersome. An enclosed cheat sheet reminding what each file is for is helpful too.

The abbreviation is a good idea and I think a cheat sheet would help for sure. Thanks!

oooo, but using PMS for Pantone is SSOOOooooooo…not PC anymore.
LOL!
I should start a thread on the Printing/design terms that make you hesitate when writing emails or instructions these days.

I use versional nomenclature.
E.g:

the stucture depends on the project.

When I’m naming logo files, I try to see them from the client perspective, assuming they won’t change the file name when they use the images. That entails to include the client’s company name, then the logo type for easy identification by the client’s employees, and for non-vectorized formats I also state the pixel size. I only add information about color for special versions, e.g. black and white logos, as normally the full color version will be assumed.

I get that this is just a fictional example, but
If that is the complete list, and if those SVG files are not vector-based, that is a concerning set of handoffs…

SVG is not a print format. If you don’t have the capability of applying Pantone colors in a manner that makes them readable in Illustrator, you could have output issues. I can make an SVG logo in Illustrator, but if I don’t click the checkbox to keep it editable in Illustrator, ALL of the color information goes away and it saves as RGB. And it will open in RGB. And it will not convert properly to CMYK for printing. And while I could make a sign using the SVG, you’d need to supply a branding standard from me to paint it.

All of the other formats you list are raster and resolution dependent. Pretty much useless for print or signmaking at those sizes.

This is probably a good place to mention Logo Package Express. It’s an Adobe Illustrator extension that automates all the naming and sorting of logos into files and folders. I don’t use it myself because I tend to avoid designing logos, so I can’t personally recommend it or recommend against it. However, I’ve read and heard nothing but glowing reviews. 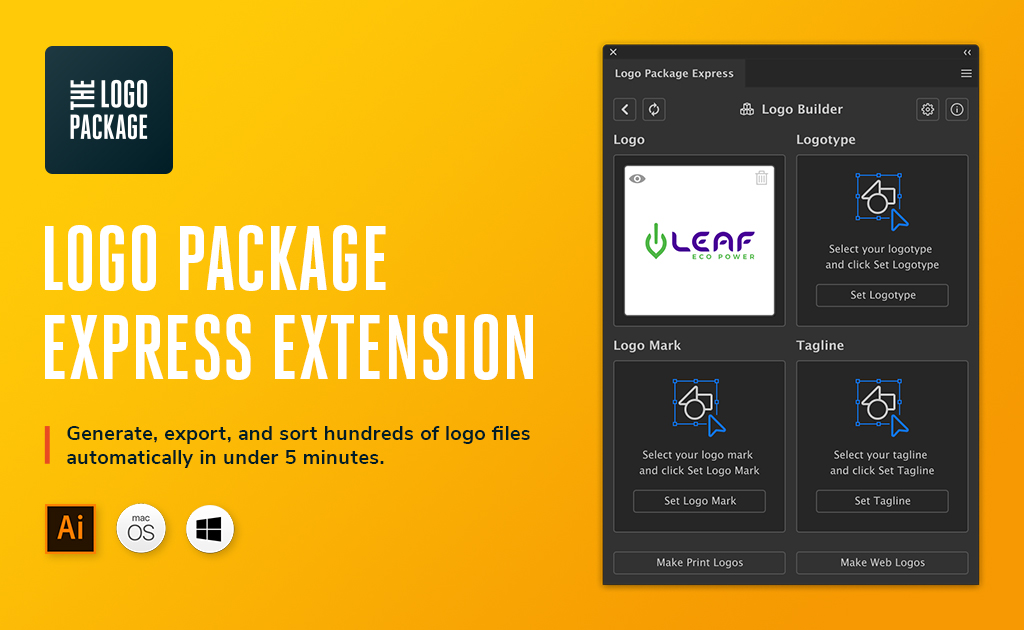 Package Logo Files for Clients in Under 5 Minutes

Designing a logo is just the beginning. Use Logo Package Express to create all the logo file formats your client needs in under 5 minutes.

I get that this is just a fictional example, but
If that is the complete list, and if those SVG files are not vector-based, that is a concerning set of handoffs…

Sorry, I should have been clearer: The SVG files in my example would be vector based, and the other ones would be pixel based.

Also, you are right that the listed JPG sizes would be way too small for larger prints such as signboards etc. They were just examples anyway. That being said, when it comes to JPG sizes, the delivery should match the most common pre-defined use cases agreed with the client, such as website, stationary templates, PowerPoints, etc. and that was what I was aiming at in my examples. If they also need a resolution that they can wrap their house in, they just need to say so. In any case, any proper brand material that gets printed - no matter big or small - should of course be designed by a proper designer, who would use the vector files as basis.

SVG is indeed vector. But it is not a proper print format vector. I’m not sure of other software that produces SVG vector art, but even in Illustrator, you can easily screw up the save and make it unusable. It would be far better to include the .ai. Anyone can make an svg from an .ai.

I see more and more of this web-crap creeping into print work flows and excused with “it’s the way of the world now.” Nope. It isn’t. And I won’t give up that fight until I retire or my job kills me. Either way, at that point, I will not care anymore.

I see more and more of this web-crap creeping into print work flows and excused with “it’s the way of the world now.” Nope. It isn’t. And I won’t give up that fight until I retire or my job kills me. Either way, at that point, I will not care anymore.

Yesterday, I was researching Amazon’s KDP book printing specs for a book cover I’m designing. Their system is geared toward non-designers who don’t understand much of anything about printing. As a result, they accept all kinds of inappropriate file types, like covers uploaded as RGB jpegs. They mention PNG and SVG as formats they’ll accept in some situations.

Digging down further into their instructions, as sort of an afterthought, they suggest that hiring a professional designer might be a good idea. Into all those afterthought instructions, they also list standard PDFs with embedded vector graphics and fonts, plus CMYK images as the best options. Reading between the lines, it seems they’re dumbing everything down for people, then listing the right way to do things as afterthoughts just on the off chance a professional might be involved.

I can understand Amazon’s reasons for gearing their system to make it easy for amateurs since it’s mostly amateurs who are self-publishing. What concerns me, however, is that most everything in this whole field of design is headed in that direction — companies cashing in on figuring out ways to bypass trained designers by building systems that work around the shortcomings of do-it-yourselfers who don’t know the difference.

I keep running across people who think they’re designers because they’ve built a website using Wix or checked all the right brochure-creation boxes in Canva. I don’t see this trend ending either. Factor in the obscenely low prices that self-proclaimed designers are selling their “services” for on the crowdsourcing sites, and we have a combination that’s in the process of gutting the low and mid-ranges of the field. If that weren’t enough, the for-profit colleges are cranking out new designers by the tens of thousands, which is a bit like the Titanic still selling tickets and loading passengers as the boat is sinking.

Sorry for the negativity and off-topic rant. I guess I’m feeling a bit discouraged today.

Mine comes from a bad couple weeks at work, and it isn’t likely to get better any time soon. And I’m heavily insulated from the low end of the spectrum, unlike most of my print counterparts, we’re very custom and very niche (read pricey.) That I’m seeing this stuff does not bode well for either the print or design industry in the medium term. There is no long term. I have an appointment in a couple weeks with my financial guy to see if I can retire at 62.5 (I doubt it but worth the look.) It’s a couple years off still, but I am so done with this.

Sorry for the negativity and off-topic rant. I guess I’m feeling a bit discouraged today.

Don’t apologise. That others rant about it too makes me feel better, as I seem to spend half my life belly-aching about it – to which my long-suffering wife will attest!

That said, I have seen small rumblings of people getting fed up with the low-cost, crap quality approach. I think there will be a return to a demand for quality work. I am sure it will end up as a 2-tier thing, where there is a feeding frenzy at the bottom of the pond. As long as it stays down there, it leaves the waters clearer near the surface for the rest of us.

After all, the clients who go to crowd-source sites were never coming to us anyway. They’d have done it themselves before and gone straight to the printer with their ‘ideas’. Although, at least that meant the printer got decent files, as they made them themselves from sketches.

Hi Sushicat,
Logo file name can be confusing if you are sending more than 1 files, means first, second,in which you were trying to put different colors and designs and the last one where every thing was finally done to be perfect. Do mention the company name, style, version, and (final file) in parenthesis.
If there is only 1 file that is final, simple and short name can suffice.
Best wishes

When doing drafts, you can label them Draft 1, Draft 2 etc.
That isn’t the question here.
When handing off the final branding package, naming the final lockups is key.
It can lead to some long file names sometimes. That’s ok, up to a point. Actually the original list posted by Sushicat12 is perfectly fine, though still, you may want to include a date indication somehow. I cannot tell you how many large corporations tweek their logo from year to year and more than once we’ve sent out the wrong logo file on a print or in vinyl. Usually caught on approval of the layout pdf, but on a few occasions in 20-plus years, the wrong logo got all the way to the show, where the logo police caught it and mad scramble ensues.

Thats a good idea PrintDriver. Would definitely be a costly mistake if sending an older version of the logo file. That gives me nightmares haha!