Looking for an AI file

I am looking to make a basic design featuring a hex (kryptek style -ish) camo pattern that I wish to put on a hydrographic film. I am only wanting the clean hex shape lines portion without any blended areas. However, I am not looking to reinvent the wheel from scratch. Does anyone have an .ai file they can send me containg such a pattern that I can use to edit colors and such from there? Thank you in advance. I would be willing to purchaser the .ai file as well as long as its what I am looking for.

Why not just buy something from a stock service? For example, Hexagonal Camo Vector Images (over 300)

I have but I can’t figure out how to change the stroke color, thickness and other fill colors because they were all EPS files which apparently cannot be edited like that.

I just downloaded one of their free hexagonal camo patterns — an .eps file. It opened just fine in Illustrator and was completely editable.

What is the nature of the problems you’re running into?

For example… I have this attached .eps file, Can you point me in the direction of how to make it so I can edit all thiose areas and lines/strokes within and around all those hexagons? When I click on it… the entire thing is as one pretty much and I want to be able to edit each individual one as well. 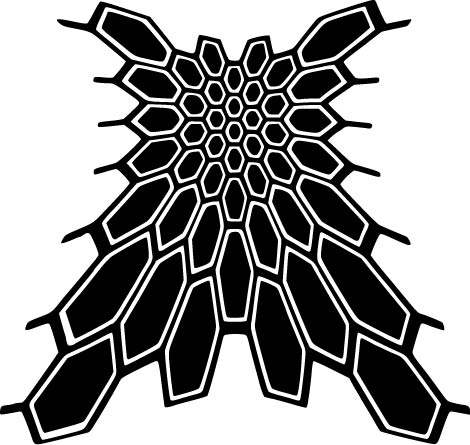 I also jusyt read that EPS files do not support transparency. Does this mean that you can’t have a transparent background?

Just based on the above conversation, my guess is that you aren’t a graphic designer, but rather someone just messing around trying to do their own thing?

I would suggest hiring a freelance graphic designer to make your adjustments, it would cost you a lot less headaches in the long run. In regards to the transparency, as long as you don’t put a white background, you’ll be fine, you could even save it as a png with transparency to have it.

What you posted is a jpeg file. Posting an .eps file isn’t possible here, so I have no way of knowing what the .eps file contained.

As @Zoogee mentioned, you seem unfamiliar with the basics.

Two different underlying technologies are used to create graphics. One is based on pixels (often called raster). The other is based around mathematical descriptions of the graphical objects (often called vector or PostScript).

EPS stands for Encapsulated PostScript. EPS is an old file format that can contain both vector and raster objects. Adobe Ilustrator, is used to create and edit vector files. Illustrator can open EPS files, but it can only directly edit vector objects in the file. If the EPS file contains raster objects, those objects will appear in Illustrator, but they can’t be edited.

I suspect you’ve been trying to edit EPS files in Illustrator composed of raster objects. I pointed you to a site where you can download EPS files that contain only vector objects that can be edited in Illustrator.

Just click the shape you want with the white arrow (direct select tool) in Illustrator and change the color.

If you want the shapes to be individual, click the thing and go to Object>Compound path > Release. Everything will turn black like a solid thing, but fear not.
Ungroup and change the color of the outer most piece to something different and you should see all the hexagons as black shapes.
They may be under the outer shape though so…Send to Back is your friend…

.ai is by default transparent background. If you want to use it on the web though, save as SVG or export as PNG works.