Hi, I have no idea what colors could represent these concepts. I’m not able to match the right color to make the right chroma. 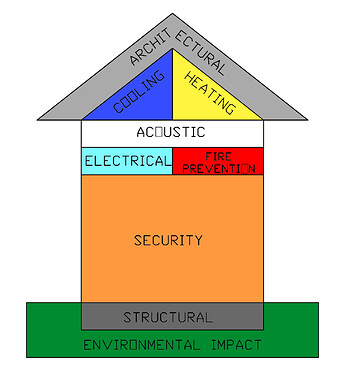 What you have for colors representing things is fine. What isn’t ok is the rest of it but you didn’t ask about that part.

I can read ARCHIT and ECTURAL, HEATING, ACOUSTIC, ELECTRICAL, and SECURITY. Can’t make out the rest.

This is an early, rough draft, right? Like you’re just blocking out the concept for refinement later, right? I can help with the color language, I suppose.

-Heating should probably be red, red for hot is as common as blue for cool, which you’ve got, and yellow is more common for electrical.
-Cyan isn’t bad for electrical, but yellow is better, and that’s free if you’ve swapped out heating.
-Fire prevention should probably not be red, since red is the hot color. I’m assuming you used red because it goes with fire extinguishers/fire trucks, but orange does caution, and by extension, prevention, better.
-If you use orange on fire prevention, you’d want something else for security. Two color ideas work well with security, and that’s black or a very dark hue for the “lockdown” feel, or something bright and noisy for the “alarm” aspect. With the other colors being occupied, and as you have two or three shades of gray already (3 if you count white) I’d go with black, personally.

You’ll also probably want different hues depending on your final format. That blue is hard on screen, and the black won’t show well on it if printed, either, for one, but that’s for later in your production process.

What? Chroma has to do with the intensity or purity of a color. Are you saying you’re happy with the colors but wondering about how vivid or saturated those colors should be?

What, exactly, are you trying to do? Is this a drafting project for some kind of architectural endeavor? Are you asking a graphic design question or just wanting to know which colors are appropriate to represent concepts and features in some kind of technical illustration.

well you were a lil bit unclear with your question