Apple recently made news as being the first company to hit a trillion dollar market capitalization. How has Apple impacted you? Inquiring minds want to know.

Windows. I’ve never liked Apple’s locked-down, we’ll-decide-what-you-want philosophy, preferring instead the full control and freedom to customize offered by a more open architecture. I’ve always thought the Mac GUI looked as though it was designed to appeal to juveniles.

Huh? Clean, minimal approach to design is “Apple’s?” I’d hardly consider that true. I don’t prefer any particular style except that which fits a client’s needs. Law firm letterhead and handtool liquidation mailers should appeal to the respective market’s sensibility, and not be subject to any designer’s preconceived “preference.”

My digital multimeter probably wins by an objective mile, but I’d also consider our smart TV’s, home sound system, the electric range, and my induction cooker pretty essential too.

1. Are you Mac or Windows?
I have both. For development I prefer Mac over Windows, for everything else I prefer Windows or Linux. If I had to choose one OS for the rest of my life, I’d pick Windows.

2. iPhone or Android?
Again, I have both. I very much prefer Android

3. Do you practice Apple’s clean, minimal design approach or do you prefer more ink on your pages?
It depends on the project. I like illustrations a lot, so my work rarely has an “Apple” feel.

5. Other than your computer or phone, what’s your must-have electronic gadget?
Fitness tracker.

1. Are you Mac or Windows?
I’ve used Macs since about 1990. Definitely preferred over Windows. I’ve used Windows PCs at work, but don’t prefer to.

2. iPhone or Android?
iPhone, but then again being a Mac user and having a macbook, mac mini, two Apple TVs an iPod, etc. my house is all about the ecosystem.

3. Do you practice Apple’s clean, minimal design approach or do you prefer more ink on your pages?
Generally, clean and minimal. But it depends on the client or the target or the message. But I prefer cleaner, elegant and minimal as a rule.

4. How do you get your music these days – still buy CDs, digital download via Apple, digital download via Amazon, subscribe to a service, YouTube?
Oddly enough I’ve done (at some point) everything you listed. However I’m just getting ready to “purge” my decades old collection of 1000 or so CDs. Mainly because I’ve already ripped them and have them backed up locally and online. And I mainly listen to my music through my phone or AppleTV. With that being said, I hate the subscription mentality of Spotify, but I do use their free model on desktop at work. Its hard to argue with being able to listen to pretty much anything any time. And I get that can be worth the subscription, but I like “owning” and for that reason, if an artist or album comes along that I really like I’ll buy it digitally through Amazon or iTunes. That way I don’t have to worry if Spotify removes it.

5. Other than your computer or phone, what’s your must-have electronic gadget?
Hmmm, thats a tough one, but being a child of the late 70s, 80s … I’d say my favorite gadget (even if I don’t get to use it as much as I’d like) is my RetroPie Nothing like playing old school arcade, atari, nintendo and about a million other old games on my big screen TV

Macintosh. I use Windows for testing how well my websites and font designs work on that platform. Everything else is Mac.

Iphone, but I use a Samsung Galaxy Android tablet and love it. My next phone will definitely be an Android. Apple has twice bricked my iOS devices with incompatible updates, so I’ll no longer be subjecting myself to that.

My work certainly doesn’t stem from Apple’s design philosophy, but I do like their approach since it’s similar to my own. I’ve always considered Jony Ive as something of a design genius.

We have a Sonos system at home, so almost everything is streamed from, mostly, Spotify. LPs and CDs still work and I still listen to them, but I have bought any new ones for, well, years. As for a portable music player, I rely on either my Android tablet or iPhone, and that’s all Spotify.

Hmmmm. Well there are the peripherals, like flatbeds, printers, LCD projects and such, but I think you’re asking for something besides that kind of thing. I already mentioned our Sonos setup, but beyond that, I can’t really think of anything I either have or want. For that matter, I’d really like to get rid of mobile phones altogether, but that’s no longer practical. I’m not really a gadget person, I guess. Oh, yeah, Mrs. B gave me a FitBit wrist band, but I rarely use it.

Oh, yeah, Mrs. B gave me a FitBit wrist band,

Hahah! I seem to remember a story about it misreporting an afternoon of immersive work as “sleep”!

Hahah! I seem to remember a story about it misreporting an afternoon of immersive work as “sleep”!

Yeah, it’s not especially accurate, but at least it’s consistent in it’s inaccuracy, which provides a baseline, of sorts, to measure how much exercise one is getting.

I like to hike in the mountains east of town. Since there are lots of up-and-down trails, FitBit has a tendency to record those hikes as climbing stairs. There was one day when it told me I had climbed several thousand flights of stairs during the day. It’s practical worthless on a bicycle and randomly interprets it as running or riding in a car with an abnormally high pulse rate.

1. Are you Mac or Windows?
I’ve used and owned and repaired Apple computers since this puppy came out in the late 70s (but ours only had one floppy drive for a loooong time.) 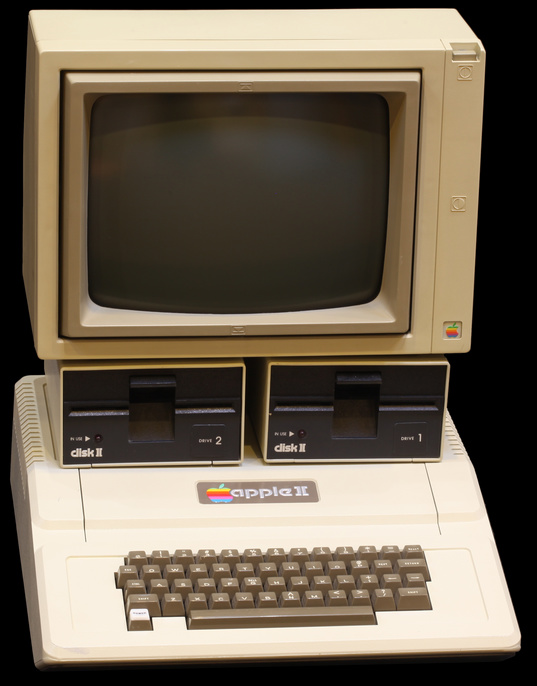 That screen was monochrome green and pretty darn near 8-bit looking.
We had an Okidata dot matrix printer that printed in a box matrix. No below line descenders. The letters “g, j, p, q and y” were lifted and squished. My college professors hated my homework because of that thing.

We used Apple Basic for physics and honest-to-gawd batch cards for biometrics. LOL. Hated it.
We have PCs in the house now, but I still work on a MacBook pro from home. I’m not an Apple fanboy and absolutely hate the candy interface and bloatware the new OS has.

2. iPhone or Android?
The only reason I have a smartphone at all is because I’m issued an iPhone for work. That puts you on call nearly 24/7. Don’t do it if you can avoid it.

3. Do you practice Apple’s clean, minimal design approach or do you prefer more ink on your pages?
Never been a fan of Apple’s antiseptic graphic design. I like Apple’s vision of making a working unit beautiful but they are too full of themselves when it comes to marketing and price tag.

4. How do you get your music these days – still buy CDs, digital download via Apple, digital download via Amazon, subscribe to a service, YouTube?
Honest, I still have quite a vinyl selection. Some of it as old as I am. It’s a much richer, deeper sound than any CD or mpeg can ever get. I have a thumb drive for the car radio and do have SiriusXM. Haven’t felt the need to buy any new music lately though.

5. Other than your computer or phone, what’s your must-have electronic gadget?
I don’t buy into “smart” household appliances.
Hmmmm……Maybe the furnace and hot water heater combination?
Oh! My car! It has far too much electronic crap in it, and it’s a must have thing, so maybe that qualifies. It even has a push switch for the emergency break. Last week I spilled coffee all over it (it’s in the lower center console where the cup holders are, along with the electronic switch for X-mode 4-wheeling.) Wonder if it still works?

All the above and more … like when I receive artist’s tracks from the artist long before they drop to the masses.

Our water heater went out on us last weekend, and we just had a new one installed on Tuesday.

When the pilot light went out on the old one, I just held the button down, used a match to reignite the light and all was good. It was absolutely, totally functional, easy to do and worked many years before we bought the house.

This new one has some sort of computer interface with flashing blue lights, a bunch of buttons, an LED panel and an instruction manual 30 pages long. All I need is hot water. I do not need a water heater with vacation settings, a remote control device and whatever other nonsense this thing has built into it.

1. Are you Mac or Windows?
Windows and Linux (Ubuntu) the only reason I have not switched to Ubuntu exclusively is Photoshop. I
keep an updated version of Ubuntu that I can boot from flash to a full operating system on any PC.
Adobe is missing out not porting to Linux. Apple products have just never tripped my trigger.
That said i would not mind giving an macbook pro a whirl but again if I was gonna drop that kind of money
I would most likely shoot for a screamin windows machine.
2. iPhone or Android?
Android
3. Do you practice Apple’s clean, minimal design approach or do you prefer more ink on your pages?
Minimal
4. How do you get your music these days – still buy CDs, digital download via Apple, digital download via Amazon, subscribe to a service, YouTube?
Subscribe to Spotify and a lot of YouTube
5. Other than your computer or phone, what’s your must-have electronic gadget?
Canon G16 digital camera. But I am not really a brand whore if someone where to give me a Nikon I
wouldn’t turn it down. I have also become quite fond of my Roku.
[/quote]

I currently have a PC and an iPad … they both do what I wanted them to do.

Ughh … no one is getting nearly a grand out of me for a damn phone.

3. Do you practice Apple’s clean, minimal design approach or do you prefer more ink on your pages?
I go with what my client wants / needs. A lot of my layouts I’m thinking in terms of moving the space around. It can be quite zen, especially on Business Cards.

4. How do you get your music these days – still buy CDs, digital download via Apple, digital download via Amazon, subscribe to a service, YouTube?
Spotify mostly, and the radio. I haven’t bought a CD in years although I have several hundred on my shelves (and more on vinyl that I never play). I occasionally buy through Apple’s iTunes.

5. Other than your computer or phone, what’s your must-have electronic gadget?
Kettle. I need to be able to make a cup of tea any time.

I am hoping that after this week things will calm down with a massive project that I’ve been working on since November and I’ll have some time to come up with questions and post these more regularly. Stay tuned . . .