More In the Techster Fraud Dept. ;)

Well they just did (appealing of course)

She is quite a character. She changed her voice and mannerisms to be similar to Steve Jobs in order to win over the tech crowd and strangely didn’t blink when talking in order to appear more imposing and serious. Before trial was set to start she was suddenly with a new partner (son of a hotel mogul) She claims they were married in a secret ceremony, others say the family wouldn’t allow it. The prediction was she would get pregnant soon after to cause a court delay and appear more sympathetic to a jury. She did. Then right before the sentencing phase she got pregnant again.
Not exactly what anyone with half a brain would do when you are facing the possibility of a long prison term. Who will be taking care of those babies? It’s rather infuriating 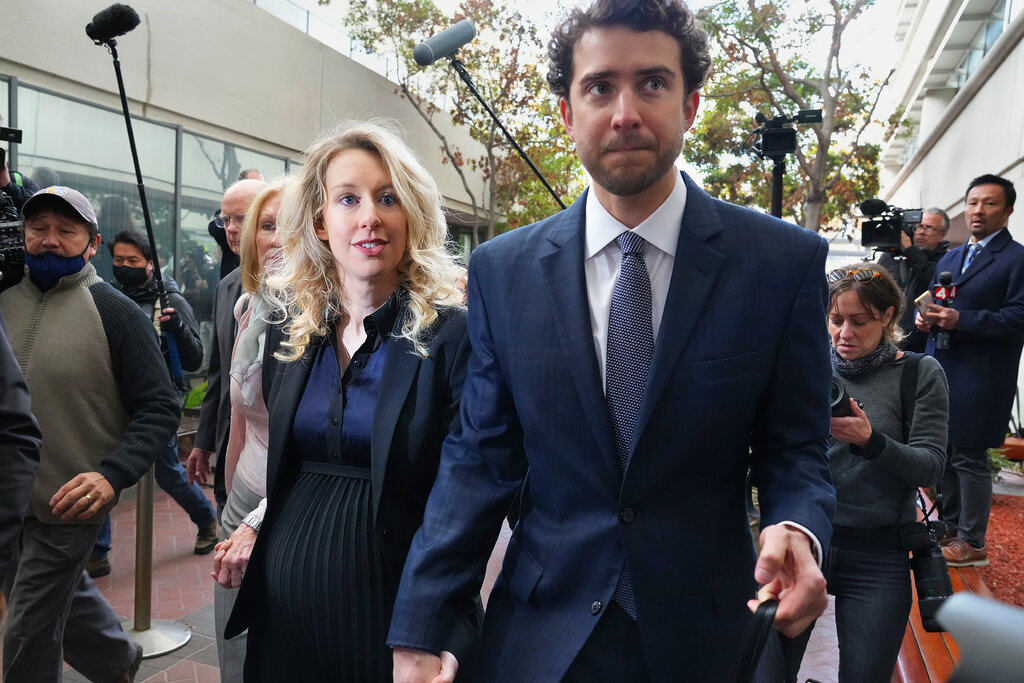 Elizabeth Holmes Is Sentenced to More Than 11 Years for Fraud

Ms. Holmes was convicted in January of four counts of wire fraud for deceiving investors with claims about her blood testing start-up Theranos.

SAN JOSE, Calif. — Elizabeth Holmes, the founder of the failed blood-testing start-up Theranos, was sentenced to more than 11 years in prison on Friday for defrauding investors about her company’s technology and business dealings.

The sentence capped a years long saga that has captivated the public and ignited debates about Silicon Valley’s culture of hype and exaggeration. Ms. Holmes, who raised $945 million for Theranos and promised that the start-up would revolutionize health care with tests that required just a few drops of blood, was convicted in January of four counts of wire fraud for deceiving investors with those claims, which turned out not to be true.
Judge Edward J. Davila of the U.S. District Court for the Northern District of California sentenced Ms. Holmes to 135 months in prison, which is slightly more than 11 years, followed by three years of supervised release.

In the courtroom on Friday, Ms. Holmes — who appeared with a large group of friends and family, including her parents and her partner, Billy Evans — cried when she read a statement to the judge. “I am devastated by my failings,” she said. “I have felt deep pain for what people went through because I failed
them.”

Ms. Holmes, who has a 1-year-old son and is pregnant with her second child, apologized to the investors, patients and employees of Theranos. She said she had tried to realize her dream too quickly and do too many things at once. She ended with a quotation from the poet Rumi and a promise to do good in the world in the future.

Though federal sentencing guidelines for wire fraud of the size that Ms. Holmes was convicted of recommend a maximum of 20 years in prison, a probation officer assigned to the case proposed nine years. Her lawyers had asked for just 18 months of house arrest, while prosecutors sought 15 years and $804 million in restitution for 29 investors.

Prosecutors had urged Judge Davila to consider the message that her case would send to the world. In court filings, they wrote that a long sentence for Ms. Holmes was important to “deter future start-up fraud schemes” and “rebuild the trust investors must have when funding innovators.”

Jeffrey Cohen, an associate professor at Boston College Law School and a former federal prosecutor, said it was somewhat surprising for a sentence to go beyond a probation report’s recommendation, but the high profile nature of Ms. Holmes’s case had made it a symbol. The sentence also showed that courts take fraud seriously, he added. “We rarely see these kinds of prosecutions,” he said.

Ms. Holmes’s case has taken on an almost mythic status among white-collar crimes. Few start-up founders reached the level of prominence that she did, appearing on magazine covers, dining at the White House and hitting a paper net worth of $4.5 billion. Since Theranos’s fraud was exposed in 2015, Ms. Holmes’s story has been told in podcasts, TV shows, books and documentaries.

Exaggeration and hype are common among tech start-ups, but very few executives are indicted on fraud charges, let alone convicted and sent to prison. That trend may be changing as the Justice Department has said it plans to be more aggressive in its pursuit of white-collar criminals.

In October, Trevor Milton, the founder of the electric vehicle company Nikola, was convicted of fraud. And Sam Bankman-Fried, the founder of the cryptocurrency exchange FTX, which collapsed in bankruptcy last week, is under multiple state and federal investigations.

In court on Friday, Judge Davila asked if any victims of Ms. Holmes were present. A man in a blue suit stood up and introduced himself as Alex Shultz, the son of George Shultz, the former secretary of state who served on Theranos’s board and who died in 2021, and the father of Tyler Shultz, a Theranos employee who helped expose the fraud.

His voice shaking, Alex Shultz described how Ms. Holmes had nearly “desecrated” his family after she suspected Tyler Shultz of speaking to the media about Theranos. She hired private investigators to stalk them, threatened legal ruin and “took advantage of my dad,” Alex Shultz said.

Jeffrey Schenk, an assistant U.S. attorney and a lead prosecutor, criticized Ms. Holmes’s argument that Theranos’s failure was typical of a high-risk, ambitious Silicon Valley start-up. “It is a logical fallacy to suggest that start-ups fail, Theranos was a start-up, and, therefore, Theranos failed because it was a start-up,” he said. “That is not true.”

Kevin Downey, a lawyer for Ms. Holmes, said in court that because she had never cashed out her Theranos stock, there was no evidence of greed, like yachts, planes, large mansions and parties. “We have a conviction for a crime where the defendant’s motive was to build technology,” he said.

Asking for leniency, Ms. Holmes submitted more than 100 letters of support from figures including Stanford professors, venture capital investors and Senator Cory Booker, Democrat of New Jersey, which painted her as a virtuous person who was a victim of circumstances.

“Much has been written in the media and addressed in the trial about the company and its failure,” Christian Holmes, her father, wrote in one letter. “Little has been said about the innovation Elizabeth strived for, sacrificed and accomplished in order to help the company continue.”

Ms. Holmes will be assigned to a prison by the Federal Bureau of Prisons based on factors such as location, space, her lack of criminal history and the nonviolent nature of her crime. The minimum security prison nearest to Ms. Holmes’s residence in Woodside, Calif., is likely the Federal Correctional Institution in Dublin.

Ms. Holmes’s dramatic rise and fall began more than a decade after she dropped out of Stanford University to create Theranos in 2003, a start-up that aimed to revolutionize health care with better diagnoses of illnesses.

The company created a machine that it claimed could run more than 1,000 tests on a drop of blood and struck partnerships with major grocery chains to build test centers in their stores. Ms. Holmes also claimed the company’s technology was endorsed by pharmaceutical companies and used on battlefields in Afghanistan. None of those claims turned out to be true.

Theranos’s deceptions were exposed by The Wall Street Journal in 2015, and a government inspection shut down the company’s lab soon after. Theranos dissolved in 2018, the year Ms. Holmes and her business partner, Ramesh Balwani, were indicted on fraud charges.

In July, Mr. Balwani was found guilty of 12 counts of fraud in a separate trial. He is set to be sentenced on Dec. 7. Ms. Holmes, who argued to separate the cases, did not cooperate with prosecutors on his case.

At her trial last year, Ms. Holmes testified for seven days, the only time she had spoken publicly about what had happened at Theranos since the company collapsed. She expressed regret for her harsh treatment of whistle-blowers and journalists who investigated the company, as well as for falsifying scientific research documents.

She blamed others at Theranos for many of the company’s shortcomings and said her exaggerations were simply painting a picture of the future that investors wanted to hear. “They weren’t interested in today or tomorrow or next month. They were interested in what kind of change we could make,” she said.
She also accused Mr. Balwani, whom she dated for more than a decade, and who is more than 20 years older than she is, of emotional and sexual abuse. Mr. Balwani has denied the accusations.

Ultimately, a jury concluded that Ms. Holmes was guilty of defrauding three of its largest investors and of conspiring to do so. After the verdict, Ms. Holmes made numerous attempts to get a new trial. She was denied.

Before he imposed his sentence, Judge Davila pondered Silicon Valley’s ethos and what had driven Ms. Holmes to commit fraud.
“Was there a loss of moral compass here? Was it hubris? Was it intoxication with the fame that comes with being a young entrepreneur?” he asked. He drew a distinction between investors who take big risks backing ambitious founders and those who don’t know that they are being lied to.

I read about this quite a few years ago and now see her facing jail for this scam.

Quite the long con!

I’ve been following her story for some time too.

I think many people (not all, of course) who have jumped into the high-tech world as entrepreneurs have psychopathic and narcissistic tendencies.

They believe they’re exceptional, that the rules don’t apply to them, and that other people have no value other than in how they can be used and manipulated. They lie, cheat, suck up to people and do whatever they think is necessary to further their ambitions while having no remorse for those they walk over. They believe that everyone else shares the same deranged mindset and that they’re superior to the dim-wits who can’t play the game.

What they don’t realize is that most people have no desire to play their manipulative, self-aggrandizing games and that others simply see them as detestable jerks. I’ve run into people like Elizabeth Holmes, and I’ve learned that they’re best avoided because despite how they might initially appear, they’re not what they seem.

Entitled rich girl with a company selling snake oil gets busted and tries to play the innocent. Yawn.

My only thought - why are they not locking up all the rest of them?

Never heard of this woman until 4 days ago. Kinda like the Kardashians. Don’t care.