I have been saving my images as a Vector image and also exporting as png imagse at 300 DPI. Is this the right size to save them?

Today I inserted one of my png images into an active inspire promethean page. The image was not sharp at all… Very fuzzy, lines were too light or missing.segments of the line. It was the same if I inserted as a vector or as a png. It became better, the bigger I zoomed the image. So I tried inserting the image in powerpoint and word and it was fine.no matter the size on the page. So I assume the active inspire program was the problem. Next I “resized” the image- in my photos-and this worked better. Then I also inserted a low resolution and it still has problems.
So my observation–not all programs serve high quality images? If I give someone an image (or happened to sell an image–hahaha) , how will I be able to guarantee the image? Just having wonderings today. 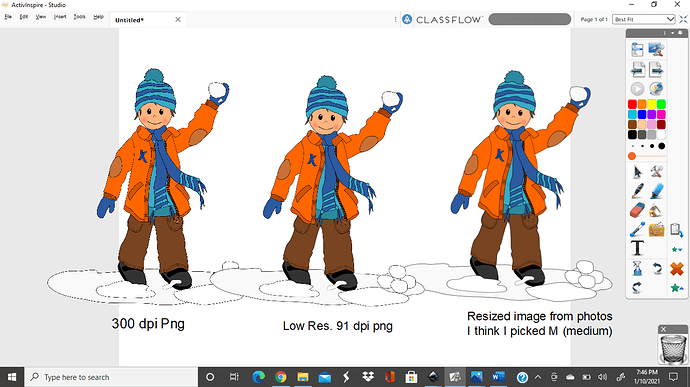 I’ve never used that program so I can’t be of much help. The only thing that comes to mind is are you viewing at 100%?

I see “Best Fit” is selected.

I have been saving my images as a Vector image and also exporting as png imags at 300 DPI. Is this the right size to save them?

PNG is primarily a format intended for digital and online use, so DPI (more accurately, it’s PPI) isn’t really a relevant consideration. PPI refers to pixels per inch, and in a digital environment, there’s no such thing as a fixed, linear inch. Instead, things are measured by the number of pixels themselves — for example, 1080 x 1920 pixels. The objective in saving being to include enough pixels to meet the requirements of how the artwork might be used.

Today I inserted one of my png images into an active inspire promethean page. The image was not sharp at all…

I needed to look that up since, not being an educator, I was unfamiliar with it. Is it an online service or does everything take place within an application on your computer (not tied to some kind of cloud service)?

When images are inserted or uploaded to various services, there’s no telling what will be done to the image on the other end. My best guess is that it’s being converted and resampled from PNG to a JPEG at whatever size and level of lossy compression they’ve determined is appropriate. (Facebook, being a familiar example of this kind of thing.)

I tried inserting the image in powerpoint and word and it was fine.no matter the size on the page.

The MS Office products don’t really do anything with the images other than display what you’ve linked to or embedded. Unlike what I mentioned above, the images aren’t converted to another format or resampled and compressed in ways that degrade their quality. They mostly just display whatever you plug into them.

Most software applications and online services that involve end users inserting or uploading images are designed to work around the limited knowledge of their non-designer users who don’t know about issues related to resolution, byte size, color spaces, compression, bandwidth, image formats and those sorts of things.

Consequently, these services and applications make behind-the-scenes assumptions, and just deal with the problems in automated lowest-common-denominator ways that take the images and make them usable for the purpose at hand.

Software applications intended for use by graphic designers do not do that. The assumption being that designers using these professional applications know enough to make the most appropriate decisions themselves rather than letting the software made a less-than-ideal, one-size-fits-all decision for them.