I’m currently working through a graphic design certification and I have been asked to get some feedback on my work. If you have a few minutes spare, I’d really appreciate if you could have a look and provide any useful feedback. The assignment brief asks for people to answer these specific questions:

Thank you to anyone who is able to help, I really appreciate your time! 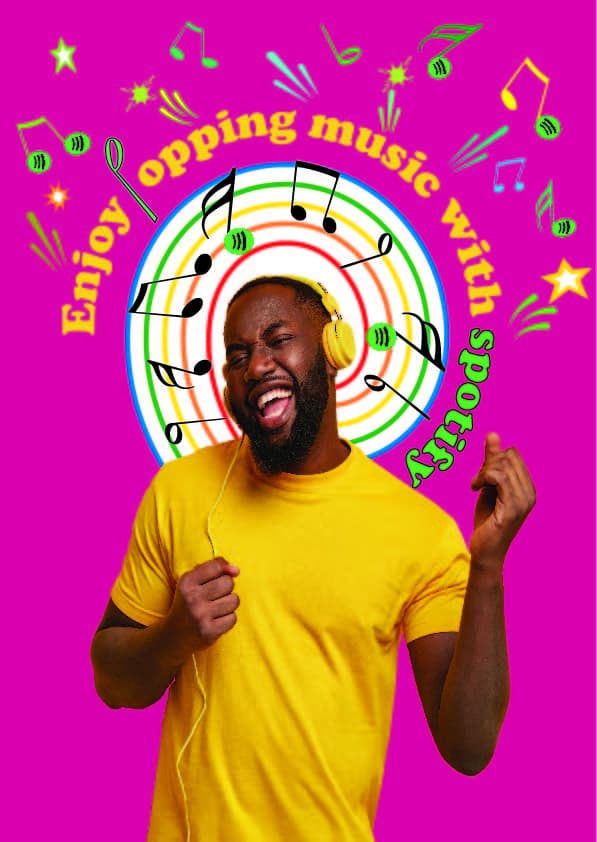 My answers will come across as a bit snarky, but I don’t mean them that way. I’m giving you honest feedback.

Do you think the graphic visually communicates the student’s objective?

I have no idea what your objective might be; you haven’t told us. It sure isn’t clear by looking at it.

Is the poster’s concept legible and able to stand on its own as a self-contained system?

What concept? There’s a guy listening to music with easily ignored small type telling people to enjoy listening to Spotify. What are you trying to accomplish? What is this — a poster that tells me nothing and provides no particular incentive for me to do anything related to whatever it is the goal of the poster might be? Are you just trying to make pretty pictures or is this composition supposed to accomplish something?

As for legibility, you’ve deliberately compromised the legibility of the message by moving it down the visual hierarchy chain to a step or two below tertiary status. And then you tossed in a gratuitous distracting trick with a musical note serving at a P.

In your opinion has the student used design elements and principles successfully to unify the system?

There’s a unity to the composition, but the hierarchy is wrong since the written message is subordinate to everything from the magenta background to the guy in the yellow shirt to the swirling music circling around his head.

Do you think the designer has successfully communicated his/her overall goal or objective?

No, As far as I can tell, there is no overall goal or objective other than to make a nice-looking composition for no apparent reason other than to fulfill an assignment. Or is the poster supposed to make people want to sign up and listen to Spotify? If the goal was the former, OK, it looks nice. If the goal was the latter, there’s no call to action or incentive that promotes Spotify — unless, of course, there’s something about the guy listening to music that makes people relate to him and want to enjoy music and begin dancing. Again, there’s no obvious concept and no apparent strategy to make this poster accomplish much of anything.

What suggestions would you offer the student to improve their work?

Define the problem better, then approach the problem with a solution that focuses directly on solving the problem. If this is a poster promoting Spotify, the poster needs to do just that, but the message is lost, even if I knew what the message was.

Did you find the student’s work relevant in today’s marketplace and up to industry standard?

In today’s marketplace from a client’s business perspective?

The composition is nice-looking, but the student apparently doesn’t understand that making something attractive is just the hook used to get the target audience to notice and pay attention before moving them a step closer to whatever the client (in this case Spotify) is hoping to accomplish. In other words, it looks nice but that’s as deep as it goes. There’s no obvious goal and no apparent strategy to achieve whatever the goal might be.

That was an awfully harsh critique, but graphic design is about more than making things look nice. You have artistic talent, which is a great first step, but you need to use that talent and put it to work in ways that go beyond aesthetics.

B has just saved me a load of time, as I was all set to reply with pretty much the same advice, when I saw he got there first.

The only thing I’d add from a critique standpoint (and I am not trying to dishearten here, just being honest), is I don’t find the composition works all that well. It is bright and fun, bat the ‘white space’ feel accidental, rather than intentional. Also, the overall feel seems very out of kilter with Spoitify’s existing brand.

Overall, though, my first thought was, ‘Why isn’t your lecturer critiquing your work along with your course colleagues?’. That’s a lecturer’s job. Teach and critique. If they are not doing this, I think I’d be asking why you aren’t getting your money’s worth.

As B mentioned, we have no idea what you are trying to communicate and to what end. Always define the problem to be solved. That way, the solution is easier come by. Otherwise, you are always stumbling around in the dark, trying to simply make things look pretty.

Finally, ease up on the cooper black and crotchets as Ps. Always try and avoid visual clichés, unless there is very good reason – and there aren’t many!

Hope this helps and you are not already half way down a bottle of Jack Daniels, crying into your glass. Remember, none of this is ever personal. It is objective criticism, based on people’s knowledge and experience and intended only to help you improve.

Keep at it. You’ll get there. You obviously have some ability and skill. We all start the same way.

The best thing about this is that it demonstrates the marked difference between design and decoration. This is pure decoration, i.e., not design.

Is that a poster? As in printed? Not likely.
You are using colors that don’t exist in any sort of print process, I’m not even sure you could do it as Spot on plate.

Like everyone said, define your goal, cuz putting Spitify nearly upside down and mixed in with the rest of the middle mess is not putting their message out there.

The photo fits the Spotify brand, so that’s a good starting point. Nothing else is on-brand. That’s not the Spotify font, and you’ve rotated and skewed the logo. The bars on their logo always point up. And the company name is sideways, which makes it the most difficult piece of text to read. Companies have ‘style guides’ which are rule books for how their logos and brands can be presented and people get fired for not following it. It’s a big deal.

Do a Google image search for official Spotify ads, and put together a collection of 50 or so, then compare yours against those. Use that as the starting point for your redesign.

I know of the stock photo you’re using, design is about attention to details much of which other users have chimed in on already.

I would suggest when picking a background color you try to match it to the stock photo you use. I believe this stock photo has a orange or yellow BG so a quick Hue/Saturation adjustment would help the image sit better in the mix. (blending)

I’d take another stab at this assignment and see what you could come up with after doing some research.