Now, who didn't see this coming? 😁 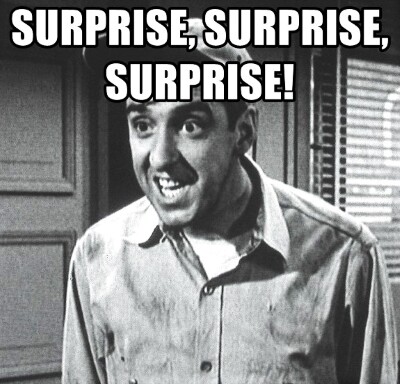 In a world filled with subs, Apple may be planning its own iPhone subscription service, which would change the way smartphones are purchased.

Adopting hardware subscriptions, akin to an auto-leasing program, would be a major strategy shift for a company that has generally sold devices at full cost outright, sometimes through installments or with carrier subsidies. It could help Apple generate more revenue and make it easier for consumers to stomach spending thousands of dollars on new devices.

A spokeswoman for Cupertino, California-based Apple declined to comment on the company’s plans.

The idea is to make the process of buying an iPhone or iPad on par with paying for iCloud storage or an Apple Music subscription each month. Apple is planning to let customers subscribe to hardware with the same Apple ID and App Store account they use to buy apps and subscribe to services today.

The program would differ from an installment program in that the monthly charge wouldn’t be the price of the device split across 12 or 24 months. Rather, it would be a yet-to-be-determined monthly fee that depends on which device the user chooses.

I’m reasonably sure my next phone won’t be an iPhone. I’ve been less than happy with iOS since the beginning. And I’m not at all interested in another self-renewing subscription to anything.

The junk calls and text messages are one thing, but Apple’s seeming inability to take these annoyances seriously or enable app developers to tackle them push me toward Android. I have a lower-end Samsung Galaxy tablet (running Android), which I’ve liked better than my previous iPad (running iOS).

Yeah, I read about this development this morning. It ticks me off more than the Pantone thing. I am completely burned out on subscriptions.

If Apple does go subscription only with their phones, I’m not sure what I’ll do. Maybe go back to a basic phone. I hate Google more than I hate subscriptions, so I don’t see myself going to an Android device. Maybe that’s foolish since Google is probably tracking everything I do on my iPhone anyway.

I’ll just stick to my current plan. I don’t have a smart phone. I have a £10 Nokia thing on pay as you as you go which I have only in case of emergencies.

Actually, the thought that someone would make a phone that doesn’t belong to me never occurred to me.
I guess if I’m gonna buy an iPhone I better do it soon.
I hate leasing stuff.
I’m thinking of getting a dedicated credit card just to put all this monthly ‘rental’ stuff on just to keep track of it (not counting work stuff, that’s their headache.)
Beginning to feel the pinch lately, with the price of everything, pretty much.

This may just be me, but I don’t expect Apple to only allow a “subscription” (lease) of their phones. I could see them doing something like what car dealers do where you can lease the device or buy it.

If they do this, my current phone is my last iPhone.

Here’s the question: is this the time to buy APPL?

On the one hand, if they do this and the market revolts, the stock price could be hurt, so this isn’t the time to buy.

On the other hand, there are a boatload of iPhone users out there who might look at this as a way of always having the latest and greatest iPhone with the result of a boost in sales. If that’s the case, this would be a good time to buy.

Here’s the question: is this the time to buy APPL?

Back in the '90s, around the time that Steve Jobs returned to Apple, my fiancé (the current Mrs. B) did something really stupid (in my opinion). She took a big chunk of her retirement 401K and bought a thousand shares of Apple stock at about $13.

At the time, I argued like crazy that she was nuts and that the stock would be worth next to nothing because the company was rapidly sliding into insolvency.

A couple of years ago, I argued with her again — telling her to sell her Apple stock because it couldn’t possibly go any higher when considering that Apple hadn’t released a new killer product in years with Tim Cook at the helm. This time, she, unfortunately, listened to my bad advice.

In other words, any predictions I might have on the matter are likely 180 degrees off from what one should do.

I also just read they have reached over …

That’s a lot of zeros! 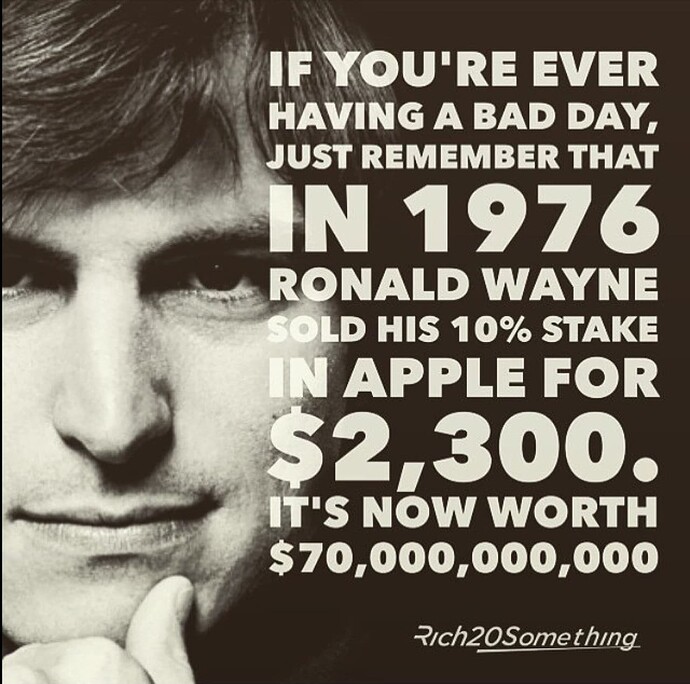 I don’t know how old that meme is, but it’s safe to say that $70 billion is off.

I’ve heard $1000.00 of original investment that was just left to accrue after all the splits and not reinvested, would be worth roughly a million smackers

Ronald Wayne is a legend — one of the three co-founders of Apple and the guy who designed their first (really awful) logo. He’s also the guy nobody’s ever heard of because he bailed out shortly after the company was formed. The last I read, he lived in a modest little house in Pahrump, Nevada, of all places.

I’ve heard $1000.00 of original investment that was just left to accrue after all the splits and not reinvested, would be worth roughly a million smackers