Outlining fonts on logo designs in Illustrator makes it bolder

I created a logo for a very large corporation. In the process of packing up the files, I had to outline the type for the vector file (we have several affiliate branches that would be using it without my supervision). Thing is, as I have previously experienced, outlining fonts in Adobe Illustrator makes them slightly bolder, especially at small sizes. It’s noticeable on the font I am using.

What do you all do to counteract this? Do you manually adjust it by using the Offset tool in Illustrator? It still seems bold even though I took some weight off of it… taking off too much weight makes it looks horrible at a large size, but okay at a small size. I tried using a lighter weight for the company name, but the proportions of the letters are slightly different.

I know tons of logos are created each day. Surely there is a workaround for this. Do any of you just not outline the fonts? I would think for such a large company, that would leave a lot of room for error if the vendor does not have our font installed when printing.

Thing is, as I have previously experienced, outlining fonts in Adobe Illustrator makes them slightly bolder, especially at small sizes. It’s noticeable on the font I am using.

That’s just the result of what happens when the “hinting” built into the font is removed by outlining the glyphs.

Hinting is a special type of encoding built into fonts that make them appear better at lower resolutions where rounding errors are most likely to occur. This is commonly useful for lower-resolution desktop printers and monitors. It gets a bit technical, so I’ll let you look it up if you’re interested.

What’s important, though, is that eliminating the hinting by outlining the font does absolutely nothing to interfere with the glyph outlines themselves. If you print out outlined type on a higher-resolution output device or view it on a very high resolution monitor, the type will look exactly the same whether its outlined or called in from a hinted font.

What can you do about it? Actually, nothing. The irregularities are the result of rounding errors caused by your monitor or printer resolution. The only thing you can do about it is leave the type live (not outlined), but you probably don’t want to do that since that would require the logo always be accompanied by the hinted font.

There’s also a thing called subpixel rendering — like Microsoft’s ClearType technology — that occurs in different type formats and on different computer platforms. This is also removed when font glyphs are outlines. As with the hinting, there’s nothing you can do about it. The glyph outlines themselves aren’t affected and will display just fine at higher resolutions.

Hey Katie,
Yes, it’s common for type to appear heavier when converted to outlines, but really it’s only because the conversion causes the glyphs lose their hinting (the magic property of fonts that makes live type look smooth at any size). It’s one of the reasons that converting type to outlines is almost always a bad move. A logo graphic, however, should never carry any form of dependency, including live fonts. You’re doing it right.

Thank you! You mentioned that an outlined type in Illustrator should still print normal on a high-res printer. Just curious if you consider 300 dpi high res enough? I printed a sample of the logo not outlined with the outlined version below it at 1 inch wide, and printed it on our laser printer. The outlined font does look slightly bolder. I attached it for reference.

It is slightly noticeable on the larger printed logos, but a little less so. 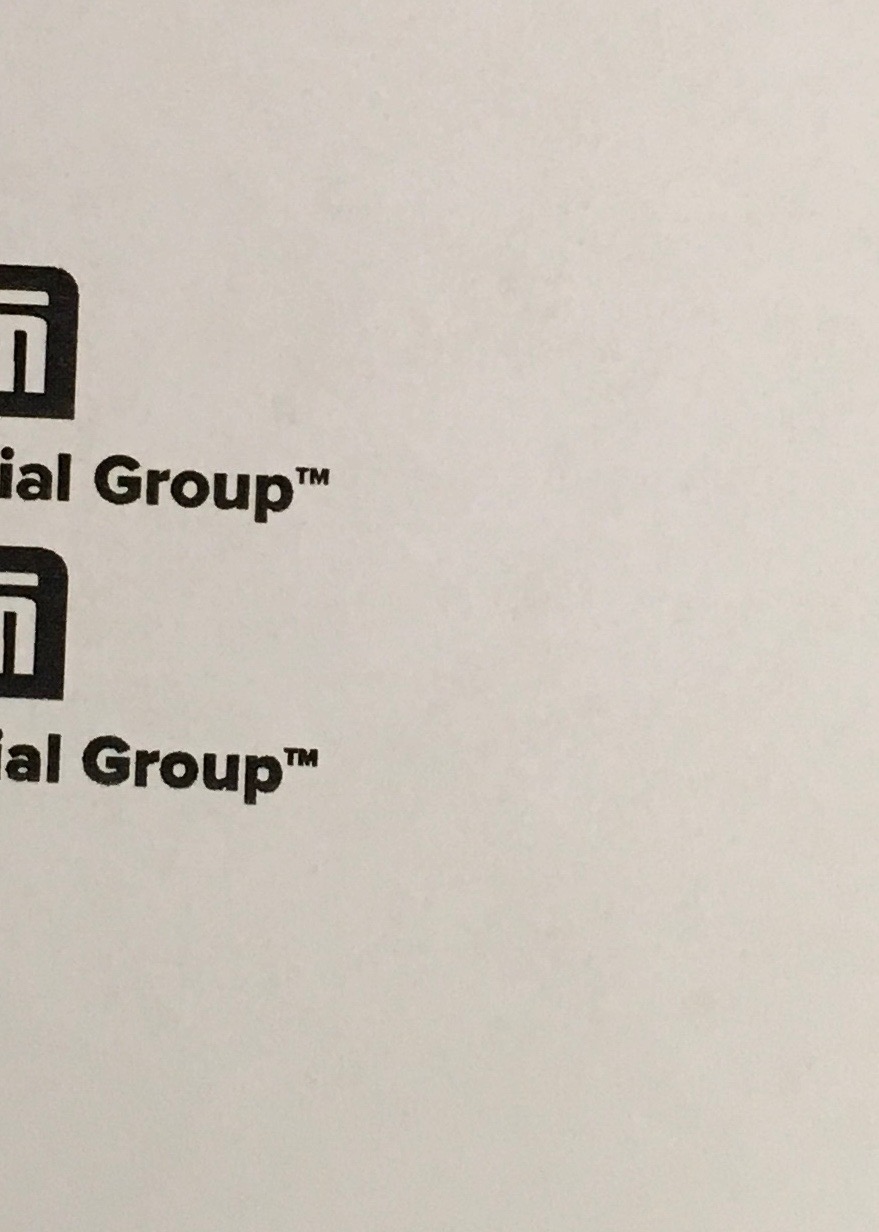 Did you use a rich black on a soft paper?

That could simply be ink/toner creep from over saturation for the paper.

This is taken with my iPad so please excuse the poor lighting. 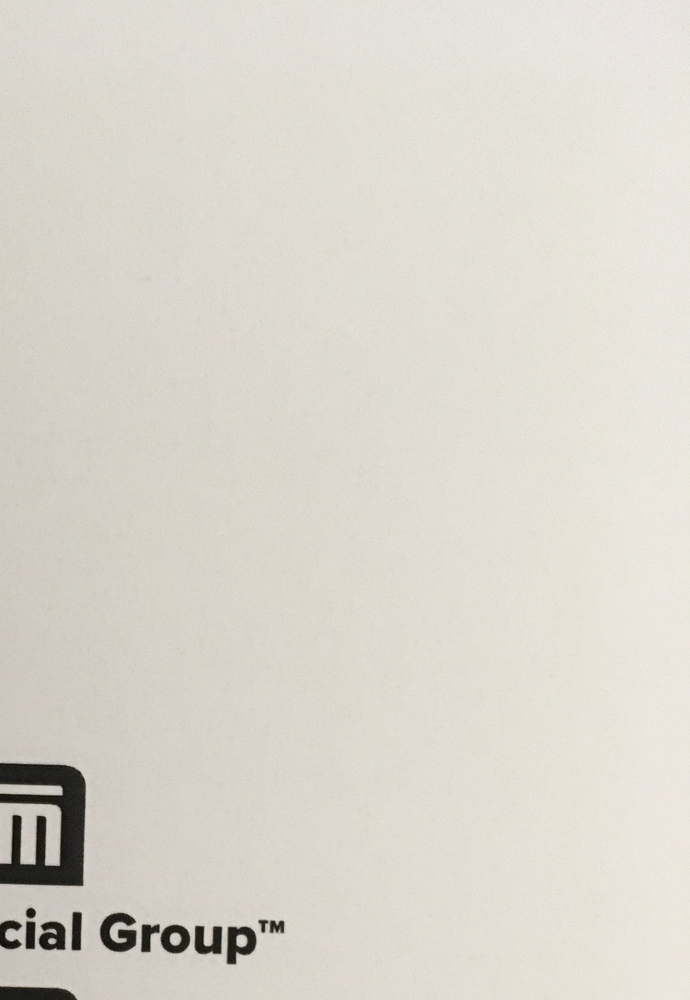 No it’s cool. If it’s process black you should be fine.

There are printers who use UV Digital printing inks. They use thick waxy “ink”. If your art requires a very high level of consistency and absolutely no creep, you can look into them. They are not much more expensive per piece but we use them for exactly this type of print.

Also, there’s a fine line to walk here. You are the expert so you can explain to your customer(s) that this IS how it is (educating the customer)

I am an employee so I won’t lose a customer. The other two designers aren’t sure how to fix it either.

300 dpi output is low enough for font hinting to kick in. Just for comparison’s sake, the output resolution of platesetters at a commercial printer can be three or four thousand dpi.

300 dpi output is low enough for font hinting to kick in. Just for comparison’s sake, the output resolution of platesetters at a commercial printer can be three or four thousand dpi.

Thanks all. So I should be fine if these go to press professionally, but if somebody prints them in their office (we have various affiliate investor firms across the country), it might not be the best quality? Of course, hopefully they would just use a TIF or JPG for smaller applications, but sometimes newspapers request the vector file for the logo page, eek.

That is my opinion, yes. I’d do a press proof if affordable for peace of mind though. - then if it creeps, try a UV ink print provider.

Of course, hopefully they would just use a TIF or JPG for smaller applications, but sometimes newspapers request the vector file for the logo page, eek.

No eek. Hinting or no hinting, vector is always preferred when available, and rightly so. The compression artifacts that JPEG could introduce are a million times worse than the absence of hinting.

Of course, hopefully they would just use a TIF or JPG for smaller applications, but sometimes newspapers request the vector file for the logo page, eek.

Bitmapped formats, like TIFF or JPEG will have the same problem (plus several others), so it’s still best to print from the vector file. The issue you’ve noticed has to do with the resolution of the output device or monitor, not whether vector or raster data is being output. The hinting in a font is just a way to help make the glyphs in a font more visually consistent at lower resolutions.

The problem you’ve identified is so ubiquitous that most of us don’t even think about it. Low-resolution printers don’t do a great job with printing and there’s no way to remedy that problem other than to use a higher-resolution printer. A 300 dpi printer is on the low end of what’s still being used. Most desktop laser printers today print at resolutions of 600 to 1200 dpi. Desktop inkjets are typically in the 300 to 600 dpi range.

This is simply a problem associated with printing from a lower-resolution printer. There is no workaround once the type is outlined.