Hello I have been asked to create a Packaging Template for a box with a top lid.
I think the folding tabs confuse me.

As I can’t seem to attach images here. If possible can someone zoom with me to help me understand what I am doing wrong here and how to fix it. I will really appreciate it the support.

I live in Dubai but would love to fix a time with one of you Packaging awesome experts.

Yeh I can help you out. Mods can fix it so you can attach images.

Yes please. thank you so much. My email address is [email address removed]. Please email me and I can zoom you a link. Is it convenient now to speak with you?

As I said - if a mod can make it so you can post pics that would be preferable.
Posting your email address is not a good idea.

if a mod can make it so you can post pics

There are no special privileges for that — any forum member can post images.

@atjgraphics, if you want to post an image, use the upload icon in the menu above the window where you write your posts (see below). You can also drag and drop images into that window. You can also just paste an image into the window from your clipboard.

Great - well if the OP can share images rather than jump on a zoom call I’d prefer that. 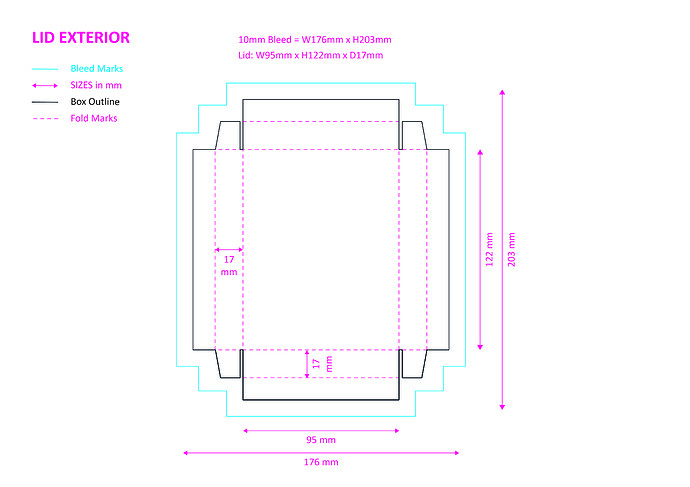 I didn’t realise you could drag it out maybe Graphic Design Forum can have an Icon to say INSERT HERE?

Please check this packaging template for me and let me know if the folding tabs are correct or any improvements I must do?

Reference Image I used. Thanks.

Looks like the outer edges fold under to form a rigid fold for the box. Plus this stops haveing a hard edge that potentially can injure someone.

Easiest thing to do - print it out - or draw it out on a sheet of paper - and fold it up.

It’s the best way to understand it.

Looks quite simple though.

You can get Origami — preview dielines and convert them to 3D models
It’s free to use but with watermarks until you pay for full version.

But it works - so you can setup the dieline in Illustrator and follow the guidelines - and the software will show you the finished product.

As @Smurf2 said, when in doubt, print it and fold it up to see. With this one, you might want to cut it out from a piece of card stock that approximates the weight of the stock that will be used. Sometimes, templates need to be adjusted just a little to accommodate the thickness of the stock being used.

It’s not entirely obvious, but if any of those flaps are to be glued, make sure there’s no printing on the spots that need to be glued together. Assuming this is a real job that will be sent off to a printer/fabricator, be sure to specify that you want the folds scored before folding (makes the fold cleaner and helps prevent cracking). A printer should know enough to do that anyway, but since it’s an extra step for them, I’ve had a job or two where they’ve failed to do it, so I always include it with the specs.

I’m not sure what you’re confused about, though. It looks like a pre-made template, so why are you doubting it? This sort of thing gets more problematic when one need to create artwork from scratch for custom packaging. In those instances, it’s critical to really think through the problem and cut out some mockups to make sure it works.

One last thing? Are you certain that this is the type of box lid you need? It’s one of those double-walled lids that creates a tight seal around the box. There’s nothing wrong with that — I’m just pointing out that there are other types of box lids. There’s also the box itself. Every box lid needs a box, and that lid needs to fit perfectly on the box, which, once again, might require some small adjustments to accommodate card stock weight/thickness.