So it looks like, in addition to paying Adobe to use their software, if you want to keep the Pantone palettes updated in the Adobe software you are already paying for, you now have to pay Pantone a subscription fee to stay with Pantone Connect. It was apparent from the beginning this day was coming. It’ll be here on October 6. Woo. Hoo. 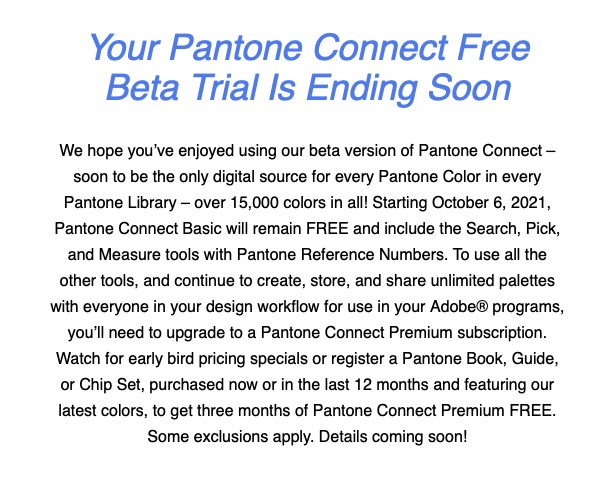 Monthly subscriptions are becoming the new norm … with everything.

You know how I “cut the cord” several years ago and saved tons of money on cable … no more. Everything is now a subscription service. I might as well kept cable lol

Pantone used to have Color Manager, which was a clunky interface to keep the Adobewares up to date. It sure as heck wasn’t easy to download and install and it gave you multiple libraries that didn’t sync with earlier ones and sometimes really messed things up when there was a color formula “upgrade.”

Pantone Connect is not much better.

In case a few haven’t noticed, Adobewares do not contain the colors for the last two Pantone book updates. Around 300 or so colors are missing. The reason I was using this as a Beta is because some of my clients were using this as a Beta and I needed the software to recognize the color numbers in their files.

Could be the end of pantone

Adobe has always downplayed Pantone in their apps — hiding the swatches in submenus of submenus and crammed in with dozens of other swatch books that few people have ever heard of. One would never know that Pantone is a mainstay of printing by the way Adobe has squirreled it away in the far reaches of their software apps.

As for me, I won’t be buying a Pantone subscription. For printers and designers involved in segments of the industry that depend on Pantone, I suspect they’ll need to. For me, though, I don’t often need Pantone for much of anything any longer. Specifying a color here and there or adding a company’s official Pantone color into an InDesign or Illustrator file is just about my only use for Pantone now days.

I’m a little slow on the uptake, here. Does this mean that I’ll need to have a subscription to add a Pantone color to an AI file and apply that color to an object?

Well, basically you’ll still have the basic functions available, including the ability to search through the books (digital versions), pick and search colors. By picking the colors, you should still be able to pick up the codes and save them to your own swatches. However, you will lose the ability to save your pantone color collection so if you have favorite colors, you’ll have to maybe pick that color and save it somewhere else in your .psd or .ai. You also won’t be able to directly share that same swatch that you saved in the app with others. It’s not much of a downgrade, you’ll just have to work around things a bit (the subscription model is targeted more directly at larger corporations and agencies).

Just read a bit more on this.

It looks like the Pantone Connect offers more range of colours and other colour pallets like fashion and interior.

I don’t think it’s going to affect the Adobe Suite of apps - you can of course optionally purchase the Pantone Connect - if you or your team needs it.

The Adobe Apps, directly downloaded are missing about 300 current Pantone Coated and Uncoated colors. For designers that bought the newest swatch decks and absolutey HAVE to have that one specific color, they did the free Connect and downloaded the swatches, which of course makes me have to do that.

It does beg the question, does being a printer require having a paid-for Pantone license (probably.) It used to be the machines that were profiled to Pantone came with their own licenses thru the manufacturer. Wonder if that is changing too.

I don’t know what the answer is.

Pantone have their own thing going on.
As do Adobe.

If you need it then buy it - if you don’t then don’t buy it.

Does the Microsoft 365 subscription thing ever come up?

Yep. You can get Microsoft OFFICE for about $150 and it’s stand-alone, no internet required.
Still get security updates. Don’t need support. Don’t need cloud. Don’t need outlook (but it’s included.) Don’t need a subscription.
Eventually that will change too.
Fairly soon all software will be cloud based and if you don’t have a fast internet connection you are SOL. There has been talk already of the OSes going that direction, where your computer just becomes a terminal.

I’ve been using Pantone Color Manager to add new color books to Illustrator, and now finally having to dig in with Pantone Connect and oh my god it’s ridiculous… You can view the color, but if you try to add it to your swatches or really do anything with it outside the Pantone Connect Extension it takes you to a page to upgrade to the paid version…

Because PMS books weren’t expensive enough, now they have the subscription model… Knew this was coming, but angry about it all over again. Sigh. Yeah Color Manager was clunky, but at least it was “free” and only have to deal with it every so often rather than anytime I need to pull a color from 2019 or newer. BIGGER SIGH.

This will bring you to the source to download the correct Pantone pallet for the Pantone Book you have.

If you have issues getting this you should contact Pantone.

The front page of my new Formula Guide directs me to Pantone Connect.
That old link you mention goes to the old Color Manager, which is discontinued.
You can no longer download palettes for Adobe products.
You may want to think about keeping your legacy palettes someplace safe before Adobe dumps them, though you may not even be able to load those into future Adobe products and Pantone is already pretty much saying to do so is not, how you say, proper.
PS, Pantone Connect is buggy in Photoshop on an M1. Even buggier than Pantone usually is.
Just sayin’…

But if you bought those Pantone books prior to the announcement of Pantone Connect, surely Pantone should honour you being able to download the assets for that book?

No harm in getting in touch with them.

Looks like Pantone are trying to cash in. Pity Adobe and others cannot reach an agreement with them to include it in their packages.

Affinity Designer has buil-in, up-to-date Pantone books, so Adobe’s software most certainly could have them too.

My book was bought in 2019, but I have since switched computers as the old one crashed and lost all my palettes. The Registration Code in it has already been used and with Color Manager it won’t let you re-use even in the same account apparently. But I bet I could contact Pantone and have them maybe deactivate so I can reactivate? In any case it’s too late, boss already paid for the subscription ha.

PS, Pantone Connect is buggy in Photoshop on an M1. Even buggier than Pantone usually is.
Just sayin’…

Of course it is lol, and I’ve also got the M1. Fortunately in print packaging I don’t use photoshop ever unless I’m touching up client’s product photography, doing our own website photography, etc… And that of course doesn’t use Pantone.

Seems like Adobe simply doesn’t want to pay for a Pantone license, which is ridiculous.

I suspect it’s something along those lines.

It’s even possible that both Pantone and Adobe expect the other to pay to include Pantone swatches.

Whatever the reason might be, since using Pantone inks has become less common for me over the years, I think I can probably get by with my old physical swatch books and using Affinity to access their Pantone swatches.

I’ve noticed that I can color an object in Affinity Designer with a Pantone color, then copy and paste the object into Adobe Illustrator. From there, it’s a simple matter of creating a spot color swatch from that object and naming it Pantone 362 or whatever.