Can you recall what was the first version you worked with?

I attended an Adobe conference several months before Photoshop 1.0 was released and managed to get a beta copy. Even before that, the prototype of Photoshop was bundled with a scanner called Barneyscan, but that was before Adobe picked it up from its developers and renamed it.

I used Omega in 1986-87 in college school and Illustrator-PS while working in 1990. in 1997-98 we still did not have enough RAM to print out our newspaper with ads on one sheet, we had to paste the ad atop the paginated printed papers. in 1999 we sent zip drives to the printers, then folded. the is a video of a developer cropping his wife on a beach i was watching yesterday, kinda weird techniques he was using and the program was so pixelated and non-definitioned.

The first version I had was 2.5. It came bundled with an Agfa Arcus II scanner. 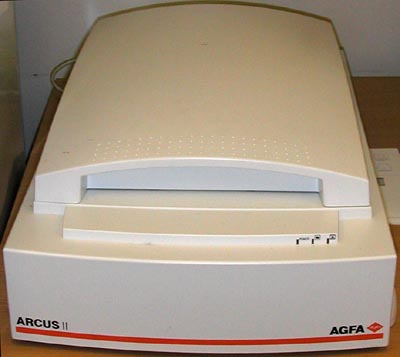 wow, that looks very familiar, i wonder if they still work?
my canon i am using now is bigger that that, but prints.

Version 4-5 was my first! This is awesome!

I know I had version 3. Mighta had 2, but my memory is the first part of me that’s returning to dust.

Either way, I had Aldus Photostyler before that.

Dammit … It certainly brings back some old, fond memories. It’s been a very good scanner, but done in by the SCSI interface. It and I parted way with a heavy heart.

There’s a fairly large landscaping company around here who’s logo was made with Aldus Photostyler (I worked with the designer who made it years ago). It makes me chuckle every time I see it. And yes, it’s hideous and damn near impossible to get onto a two color press.

probably, been so long.

For those who wondered about the use of a feather to represent photo processing, I think I know where that comes from.

Many years ago I worked with an incredible bunch of guys who processed film separations by hand. Film produced from a large process camera would sometimes need some attention before it was used to make the plates for litho printing.

This was done with chemical etching to ‘open out’ the dots in the halftones. Usually this was done carefully with cotton wool swabs, earbuds and so on but for particularly subtle effects the chemical was washed over the film using a goose feather. The skill involved to colour correct 4 colour separations on 4 different pieces of film still leaves me astonished.

This is of course exactly the kind of thing that PhotoShop was and is used for. Within 6 months of PhotoShop landing on my desk, those guys were out of work, with skills that no-one needed any more and soon after, the process camera went in the skip.

It certainly brings back some old, fond memories. It’s been a very good scanner

It would make a high quality scan. But it was slooooooooow.

The very first time I used PS was back in the early 90’s on a friends Mac. I was fascinated by it

I think I drew a row of houses with trees or something like that. No idea what version it was … but it was nothing like today’s behemoth

My friends dad at the time hooked me up with his copy of 3 when he upgraded to 4. I had been using some software called Xres before that.

Now I want to see all of the hidden about screens for each version! 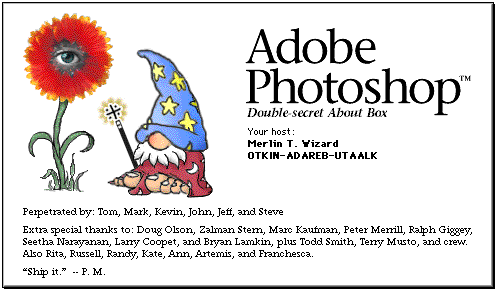 This is of course exactly the kind of thing that PhotoShop was and is used for. Within 6 months of PhotoShop landing on my desk, those guys were out of work, with skills that no-one needed any more and soon after, the process camera went in the skip.

Yup. I lived through that too. At the time I was working at a daily newspaper. Desktop publishing came along and the entire backshop was laid off. Dozens of paste-up people, camera operators, film strippers, typesetters, etc., were let go and replaced by a few lower-paid paginators working on computers.

Most of the people let go were older union workers with few skills other than those that were made obsolete by Adobe.

I don’t remember exactly which version it was, possibly 2 or 3, but it was definitely the one BEFORE there were layers.

it was definitely the one BEFORE there were layers.

I remember when editable text was introduced. What a time-saver that was!

Wow, it’s awesome reading everyone’s responses. Well, my first foray in PS was probably CS 1 or 2…I know we used CS3 in school, but my dad had it on the family home computer before that, I just don’t recall which version that was. It would have been about 2 or 3 years before I was in college, so maybe it was CS1?