Hi all, I’m a student currently working on a project which is to be completed in the style of Ian Anderson. If you’re not familiar with his work it tends to be maximal minimalist and he draws a lot of inspiration from Japanese pop culture(i’ll include a photo below) 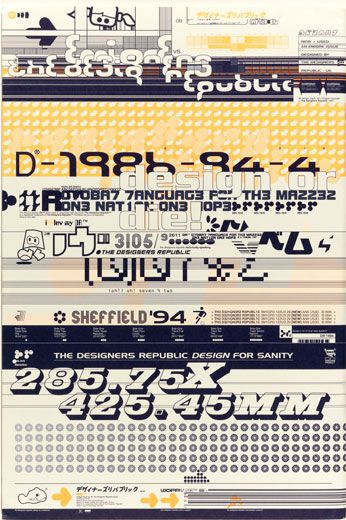 I’m really struggling with finding interesting post modern font styles that are accessible, if anyone has any recommendations for fonts in a similar style that would be super helpful.

Have a look at the fonts of Jonathan Barnbrook, Neville Brody, Barry Deck, and Emigré for starters. Look at The Face and Fuse magazines. David Carson and Raygun. The list goes on, but the are some of the main players at the time.

That was my era first time around. The other day I came across a pile of 90s Creative Reviews I have in a box in the loft. Interesting nostalgia trip.

What do you mean by “accessible?” Do you mean fonts you can use without having to buy them or do you mean something else?

I hate to suggest this since I have mixed feelings about this kind of thing, but there are plenty of free fonts that could easily be called postmodern. More often than not, they’re included with the grunge fonts, so if you search for that, you’ll find some. You’ll need to sort through all the stuff that doesn’t match, but if it looks like something Ian Anderson might use, grab it.

Much so-called postmodernist typography didn’t depend on new typefaces. Instead, the genre often depended on using more conventional type in unconventional ways. For example, cutting it apart, staggering the baselines. or deconstructing it in various ways.

This is exactly what I was looking for, thanks so much!!!
I’m a huge fan of the face, I remember seeing their archived cover exhibition near Central Saint Martins in London a few years ago.

I think i mean accessible in terms of fonts that would be free for educational use, also fonts that don’t break the bank.
Thank you for the insight into the genre though I definitely think I overlooked the fact that I can mimic that style by using ‘common’ typefaces in unconventional ways.

Some of the Emigré and Barry Deck fonts are available on Adobe Fonts with you Adobe subscription.