My last design : A Pro Flyer With Photoshop :you will find the video explaining the design in my youtube channel : Efficient ---------------- 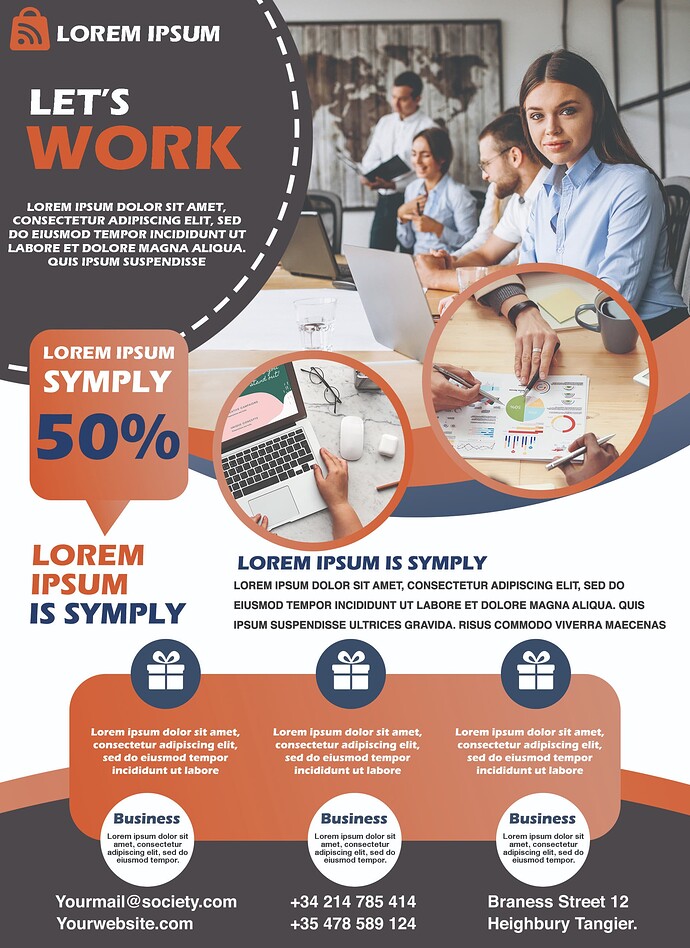 In addition, for around a dozen different reasons, a photo editing application is not an appropriate tool to build a flyer.

A Pro Flyer With Photoshop

I think you should consider working on the hierarchy. Where does your eye go to when you first look at this poster? It may also be helpful to rely on a grid system.

There’s no reason why you cannot build a flyer with Photoshop. It’s as legitimate as another layout tool.

As long as you have live text layers, vector shapes and vector masks… And save as a Photoshop pdf.

There’s no reason it won’t look as good as any other.

You could even have spot channels.

But usually you would use a page layout tool like quark or InDesign. At a push illustrator or similar.

And if you must…yeh Photoshop can be fine.

What you will lack is no support for automatic bleed. Which makes it awkward as the canvas has to be larger than the print size with the artwork extended into the bleed area.

You could place the result in InDesign or illustrator and export it with bleed and crop marks.

But this is one of these occasions why Photoshop should be avoided for this type of flyer.

The worst I ever got was an entire magazine designed with Photoshop. 120 separate psd files…it was a nightmare.

And these types of videos are the reason I tell people to stop following you tube videos.

Overall I’m assuming, as the link was removed, that it was awful practices and terrible result.

And why is it bad to use Photoshop?

Because typically you’ll end up with a raster format.
That is it’s completely made from pixels.

If you start the flyer at 300 ppi and it’s a5. And the client wants some a4 then going from a5 or a4 is going to reduce the quality.

Why is 300ppi bad for text?
Text is software, it’s built and designed to include “hinting” which is great.

But when text is live, that is editable and not outlined or rasterised, the output device (the printer) will rasterise the text at the native level. That is a digital printer might rasterise at 600 or 1200 ppi. A professional litho printer will rasterise at 2400.

Which is much higher than 300 ppi.

However, if the Photoshop file is saved as a Photoshop pdf and has the live text, vector shapes and vector masks, then the resolution of the file won’t affect these elements.

Even if you place the file in InDesign. The live text and vector remain in tact.

However, if you placed it as a psd or tiff, it would flatten and rasterise the entire file to the native resolution of the psd or tiff file.

That’s why it’s best to save as a Photoshop pdf with text layers, vector shapes and vector masks.

…
Why is it bad for the rest of the design?

The vectors remain in tact.

As the resolution is fixed.

…
Designing in apps like illustrator or InDesign is preferable because

Like illustrator has much more tools for text and illustration.
InDesign has much better typographical adjustments and use of styles which is far superior.

…
With illustrator or InDesign you place a raster image and see an effective resolution of say 3000ppi.

Which is great. You could export a a6 size file and ask a printer for

All from the same pdf as long as you don’t downsample the file.

If you made that same pdf from Photoshop you’d be stuck with the original size
Unless you started the poster at 150ppi in A1 size.

If you do that then you’ll 100% be able to have it printed at all the other sizes you want.

…
Why does it make a difference?

A1 size at 150 ppi would be pretty resource intensive on the computer.
And result in a huge file.

You will find out tough without bleed or proper crop marks from the Photoshop pdf.
You’ll need to extras work to get this.
Online print on demand might not accept a properly formed pdf with incorrect size and no crop marks.

You’ll find it tough to repurpose the same flyer to say a social media flyer and all the different platforms.

Lastly, it’s not really a good idea to use a Photo editing tool to creat a complete flyer.

I wonder why the others are not called DesignShop and DrawingShop?