New iMacs in all different colors!

Is Apple that far out of the loop? Seriously?

And save your monies for your favorite color:

I haven’t bought a new Mac since the 90’s I think. And then it was the StarMax, a clone. MacOfAllTrades refurbs for me!

Interesting. I was not familiar with that company.

It’s incredible really. People will buy into this. It’s crazy how this works.
I’ve been arguing with Mac people since the M1 chip came out - it’s not extraordinary at all, it’s a good chip but that’s as far as it goes. It’s not a game changer, unless you were a Mac user before.

Prior to the M1 most macs shipped with the U type processors which are Undervolted and throttle performance.

Most comparisons of M1 chip performance were done against the lower voltage intel chips, which are designed to throttle. editthe chips in previous Mac computers

When the M1 chip was compared to the i9 processor it performed at a similar level, and that would be buying the highest end Mac.

People think Apple have done something amazing, but the truth is you could be an i9 processor, 32gb RAM, great graphics card , in an all-in-one with a 32inch screen PC for about one quarter the price you bought the Mac at.

I truly believe this is simply buying things they do not understand.

PCs/Laptops are so complex to buy, there’s so many options and one computer priced at 1.2k compared to a similar priced 1.2k computer may not perform the same at all - one may be built for portability, the other as a desktop replacement, but compiling different components at different price points.

When you go into an Apple store it’s computer A B C or D.

I know what will happen here, Apple will sell out of the Pink model. I know this is true.

I was looking at laptops in a shop with my wife (not tech savvy). I asked her which laptop she would go for. She just pointed at the pink one. When I asked why, she just said she liked the colour.

That was it. There were about 5 computers with better specs priced the same.

So, kudos to Apple. They’ve demystified buying a computer, and now they sell them in pastel colours. They will sell like hotcakes. And people will be wowed by the M1 chip.

But unbeknownst to them - there are better computers across the aisle, and they are cheper, better, and more suited, but they are all black/silver/gray and maybe one or two in pink.

I am sure you are absolutely correct, technically speaking, but I will still go for the 27” iMac when it comes out. I am completely familiar and comfortable with the OS. I use some software that only works on Mac. Also, for me, I want a machine that doesn’t get in the way of what my head wants to do. Although I am sure that would be the case now with modern Windows OS (it’s not like Windows from the days of yore) if I were familiar with it. All comes down to preference.

For many, (likely more the home use purchaser) brand probably does play a part. We, of all people, understand the way brand works in consumer decision-making.

How many people buy an BMW to sit on their drive for the neighbours’ benefit, when there are cheaper cars out there that will do the job just as well, if not better? These days, cars are not ‘drivers’ cars’. They are not designed to go sideways around a bend. The back end won’t skip if you get it wrong. They are all consumer products designed to make the driver feel like they can drive a car like a hero, even if they not have the slightest idea of how to pull a handbrake turn or double declutch, if their life depended on it.

For those of us who are buying macs professionally, it’s because they do what we want them to do. There may be some throwback to the days when Apple were the industry disruptor. I don’t love what Apple have become as a corporation, but that’s a whole other conversation.

Whichever side of the fence we sit, you have to take your hat off to Apple, in that they have taken themselves out of the niche designer market and given themselves a wider audience. Who knows, without it, living off just the creative industries market, they may not have survived. No point being a maverick if you are dead.

I did dally with the idea of jumping ship at one point, in part due to your experience and thoughts, but decided that I will stay in the fold for a number of reasons. Still, it’s good to stick your head above the parapet every now and then and check you are making the right decisions for yourself. Ultimately, I probably can get, faster, better, more robust tech, but I’m likely never exhaust the capacity, even with massive layered photoshop files. A mate of mine is a vfx designer and works on a Mac Pro with Flame. He does really high-end stuff for the big boys and it works fine for him – though his storage requirements are a little more than an iMac Pro internal HD offers!

As ever this debate can only end in ‘what suits you’ – as long as you inform yourself enough to know what you need and make intentional compromises.

So, kudos to Apple.

Yeah, no. I’ve always found their tactics disingenuous and nothing’s changed. For a short time in the early 2000’s I enjoyed some of their advertising—only positive thing I can say.

I’m not impressed with the M1 chip. It is just another computer. They are all computers. Machines that most times do what you want them to, and other times not so much.

This isn’t the first time Apple has offered rainbow-colored cases. They did it right after the “bonde blue” G3 came out. The next iteration of that machine came in all flavors. 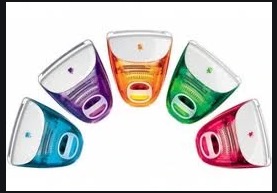 Apple probably recognized the death of the design market at least a decade ago. It was apparent before then, they were probably one of the first knives back in the late 80s.

All marketing is disingenuous. All of it. It’s all based on a stretching of what might be truth. And a person’s willingness to suspend disbelief when faced with choices.

This debate does end in “whatever suits you.”

Well I was just talking about how Apple have set their appeal by offering no fuss buying options compared to PC. If only Microsoft developed their own range of high end machines to rival. Simplify the process of buying a PC. But Microsoft make far much more money on licensing the Windows platform to the 1000s of computer manufacturers out there.

What will hurt is the likes of Intel and AMD. Far less processors sold now, with a major player producing their own. But that’s not a bad thing competition is rife between Intel and AMD now.

It’s just a pity Mac’s are so expensive for what is under the hood.

To take @sprout analogy of buying the BMW for the benefit of the neighbours. It’s pretty much like buying a normal car and putting a body kit on it to make it look like a BMW.

That’s what bothers me about Apple.

They recently said how much metal they will save by not putting a charger in the box. But how much would they save if they didnt have a new product launch every 6 months.

Everything about Apple drives me mad, from overpriced tech, to Apple fanboys and the lies etc.

But one thing that I say they got right is the no fuss buying options.

Now with colours, they will fly off the shelves.

I do know a girl in early twenties who bought a MacBook Pro it cost about €3000 And asked her what she uses it for, primary use, Netflix.

Yes, some people will buy Macs because they like the colors. It’s not all that different from how people buy cars, shoes, or sunglasses.

People like the looks of things. Looks factor into my decisions too. As a designer, I’ll pay a bit extra for a nice-looking computer, but there are plenty of nice-looking Windows machines.

The reason I buy Macs has nothing to do with the hardware, even though I’ve never been disappointed with Apple hardware. I don’t stick with Macs out of love for Apple. I prefer Android to iOS, and have never been a fan of iTunes or their other products.

The reason I buy Macs is the Mac operating system. Or perhaps it’s more accurate to say I prefer the Mac OS to Windows. For me, Windows is awkward, counterintuitive, ugly, and feels like a trip back to the 1990s. More important, Windows interferes with my productivity, slows me down, and frustrates me.

Another reason I prefer the Mac OS is its Unix underpinnings. I can drop down into the Unix command-line interface for various tasks. I once spent most of my time designing and coding websites, so the Mac OS’s similarity to Linux saved me a good deal of unnecessary headaches. I also make extensive use of AppleScript to automate various tasks, like cleaning up and formatting text for HTML and CSS. When combined with RegEx, AppleScript has saved me — no exaggeration — thousands of hours on text- and coding-related projects. Finally, several software applications on which I depend, like Glyphs, BBEdit, and Transmit, are not available on Windows.

Perhaps if I had started on Windows, I’d feel differently and would have found equivalent work processes. I didn’t, though — Windows didn’t exist. Many Windows users have similar reasons to mine regarding why they prefer Windows to Mac OS. This is fine. I have no argument with their preferences. Whatever computer setup works for someone is fine; it doesn’t matter to me one way or the other.

However, Windows does not work for me. I spend somewhere between 50 and 60 hours each week on a computer, and if it means paying a bit extra for the one I prefer, for me, that’s a total no-brainer.

Funny I work on both Mac and Windows but not loyal to either.

I hate the Mac OS. For me it’s an abomination. I have two folders, in and out. Every single day the Finder changes the folder view from what I set it to. Moving from in out folder can cause s slinging wheel. I navigate to the folder to search, and it automatically goes to the whole computer instead of the folder I’m in.

There’s so many little things I cannot stand drives me crazy.

Windows isn’t much better. But I can shoehorn that better.

But I don’t care About OS.

It’s price. And when I can buy cheaper for better I will.

All the apps work the exact same.

Yeah, maybe your horse is dead, but mine still annoys the #### outa me, and deserves ongoing beating.

The other thing that annoys me is the apps jumping up and down in the dock. Yes I know I clicked you and I’ll get there in a minute, calm down!