Hi, I have currently been in the process of designing a monogram logo named Highball Technologies which has been taking about 4-5 weeks now, I’m almost now nearly closing to the final phase. The refining part where you change some things or add some depth, even more, has been stressing me out a bit.

I have most of my ideas I thought of about generally, though I just had given up a bit after that… Since then, I had been more open to expressing my progress with anyone on what and how I can improve to make this monogram logo visually simple. 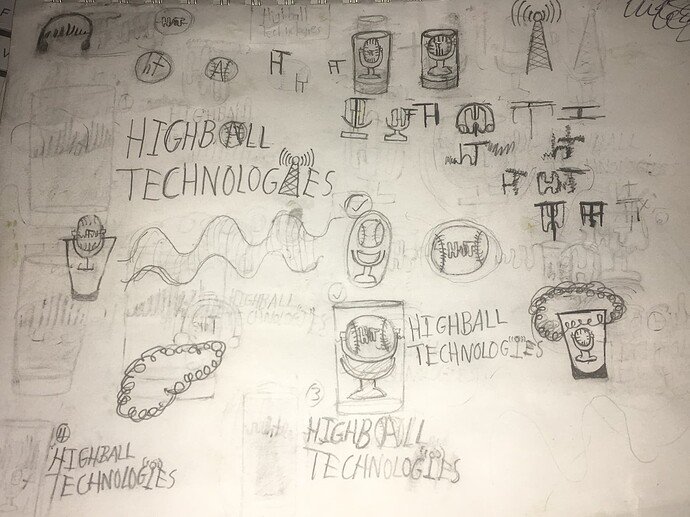 Although it would be gr8 if anyone had any recommendations, suggestions, or advice on how can I achieve to make this design simply and visually better. Thank you for your extra support.

What does Highball Technologies do?

The Highball Technologies brand name originally came from after I had used a random generator to generate design briefs for designs, illustrations, and other topics for design where it gives you a brief and you can basically practice the process of designing it from researching, developing, and then refining it.

Highball Technologies is only a form of a radio show podcast. It’s something new and fresh. It was from a brief that I randomly generated and they just gave me one with its info. I don’t have the brief with me because I didn’t save it though I remembered most of what it was asking me to do. Despite the challenges, you just design in your own style or however, you should.

So it’s not a real project & you didn’t even save the brief the random generator gave you? At a guess, I’d say what’s stressing you out is that you don’t know how to move this forward. My advice comes from my first creative director: make it as real as possible as early as possible. I can’t critique sketches. Those are just for generating ideas and they are rarely shown. You need to take those ideas and refine them and then put them into context to see how they perform. That’s the process. If it’s for a podcast, how does it look in a tiled list of podcasts?

A highball is a mixed drink (unless yer talking about an obscure 1800s pitcher)
A flyball is baseball.

as Dgolas hinted, take your concept down to something simple enough to tile for a podcast. Or at least have a variation that does that. But since this isn’t real, and you didn’t even bother to save the brief (lack of attention to an important detail like that will get you fired in the real world) I really have no other advice to get beyond the sketch stage. You have no direction, no market demographics, no nothin to work with.

Despite the various sports balls in your sketches, you also included some highball glasses, so I’m guessing you know that a highball is a mixed alcoholic drink that has nothing to do with balls.

Unless it’s a program where people lounge around, drink, and discuss sports, you’ve missed the mark. What a “new and fresh” podcast of liquored-up guys babbling on about sports would be, I haven’t a clue.

You mentioned “researching, developing, and then refining,” so you’re also aware of the process. Yet you asked us to critique sketches or provide input without indicating what this podcast is about, who its audience is, what its personality is like, or what its host and guests are like.

I’ve found that ideas for logos emerge most naturally from a tightly defined problem. Boiling down and extracting the essence of that problem usually results in some good logo ideas. What typically doesn’t work is what you’ve done — drawing a picture of what the organization is, does, or makes.

No value added here, but it’s also an old slang term for driving a steam locomotive as fast as it will go, or at maximum steam pressure; i.e., pushing the ball to the top of the sight glass.

I understand. I didn’t do enough more research on the term for a highball. Today I did some more background search and there was another meaning for the “highball” and that interpretation includes “to travel very fast” like a vehicle or even a train. No excuse, I had been thinking too much about the term highball which I only focused on the drink and how to incorporate that into the design at first. With speed, I thought about deciding on this podcast, what energy it gives, the audience reaction, and the word technologies would be based on sound and audio, like commentary though it’s part of a radio show/podcast.

I’ll work on something and come back with some results later.

Again, thanks for the honesty critique a few days ago.