Hi there, I’m trying to re-create this striped ribbon effect in illustrator.
IMAGE

Could anyone provide some tips. I’m able to create a solid ribbon, but the lines are becoming quite tedious…

This was as challenge. And I will say first and foremost, Illustrator may not be the best choice. There may also be a plugin that will do something similar.

I used a pretty basic font in my example, so YMMV.

This shows my finished art which is “semi” live text. More on that later. You will also notice I created a a symbol of the striped pattern which oddly enough, to be mapped onto the text, they had to be horizontal.

You can see above that the text is live and can be updated, once again it’s “sort of” editable which will make some sense in a bit. 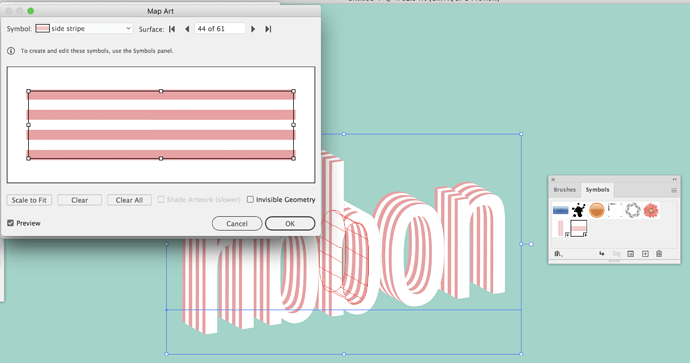 So, lastly, I added a simple 3D extrude and bevel effect. I chose no shading and I left the extrude angels at the default, but they of course can be changed.

Then the key was to click the map art button which I was then able to select my pre-created pink and white stripe symbol form the drop down, and then in the top right of the map art panel I had to advance through each of the generated 3D surfaces (in this example 61), and choose the stripe pattern symbol and then click the scale to fit button every time so that it was consistent.

So, it takes a lot of steps and you do need to assign the art per each surface, but then it’s done. However, as always, if you are planning on printing it, you’ll want to expand the art, and even then, with 3D extruded items there is no guarantee that it will print or behave as intended. YMMV.

Lastly, I didn’t use a cursive font, that has interacting lines, so I’m not sure what might happen in that situation, but this may at least be a starting point.

Astute Graphics develop some very cool plugins for Illustrator that may help with your project.

Have a look at the Stylism plugin. The offset & block shadow tools.