Advice needed. I grew up really poor and have always struggled to negotiate salaries, raises, and higher freelance rates. I’ve been contracting for a company in the data/marketing industry for a few months. I didn’t have time to research rates and was afraid to miss an opportunity so I signed a contract to work for them for $28 an hour designing ads. The company is now creating a new department and is interested in hiring me on as an art director to help get it established. I have 12 years of experience and recently graduated with an MFA. I do have experience with marketing, managing multiple brands (albeit not glamourous ones), managing projects and staff, etc but it’s been a while as I’ve been in grad school for the last five years. I’ve been doing research for weeks to try to figure out what kind of salary range I should request. I’ve read it is best to be the first one to mention salary and it’s best to start high. I don’t want to throw a ridiculously high number out there but I do want to start high so I hopefully land in a place I can feel good about. I was thinking about starting about 12-14k higher than where I hope to land. Is that too much?

I’ve never actually negotiated a salary before so any suggestions are appreciated. I know I would be a huge asset to this company, but I’m not sure my portfolio is strong enough to support a high salary request. I have older, more relevant work, but haven’t had time to update my portfolio which is mostly focused on fine art and passion projects since my focus until recently had been art and design education. The job sounds like it could be a really great opportunity to move me in the direction I want to go, probably good enough to accept a below-market-average salary but I think I’m worth more and want to feel valued. I made the mistake of working for next to nothing when I got out of undergrad and am not interested in repeating that experience. Any advice is appreciated.

Also, feel free to take a look at my portfolio and share any impressions/suggestions. www.carolrecord.com

You’ve brought up a subject that’s difficult for almost everyone. Advice is also difficult since every situation is different.

You have an advantage, here — they know you and your work, and you know them and the work you’ll be doing. The fact that they want to hire you gives you some leverage. They’ve been paying you $28 per hour for contract work, so you know that amount is doable.

On the other hand, hiring you comes with some additional financial costs they didn’t have with your contract work. For example, they’ll need to contribute to your Social Security payments. They’ll need to provide a medical insurance plan. There will likely be paid vacations, holidays, and sick leave. There might also be retirement benefits, such as matching 401k plans. They will also provide you with working space, software, and a computer, I assume. Suddenly, that $28 per hour becomes more like $40–50 per hour to them.

However, from what you mentioned, they’re expecting you to take on a management role with considerable responsibility — a director position tasked with building a program. In other words, this is important to them and they want you to do it. A new program is a significant investment for any company that exceeds the cost of a single employee and certainly is more important than a few extra thousand dollars per year to get the right person to build it. And apparently, the right person in their opinion is you.

Like you, I went back to school for my MFA. At the time, people were puzzled why I did it. The common wisdom is that employers might require an undergraduate degree, but beyond that, it’s all about one’s portfolio. Well, this is true, if one is applying for a graphic design position. When you’re applying for a higher-payment leadership role, such as a CD or AD position, higher-ups in the company are equally concerned with management, leadership, ambition, and critical thinking skills, so previous management roles (like you’ve had) and a Master’s degree makes a huge difference in their minds. For me, that extra two years of college paid for itself several times over.

Finally, the job as you described it will look fantastic on your resume. Whether it’s a great job that pays well or not, I don’t know. What I do know is that a resume that lists you as a department head who, in essence, built and managed the department will mean that you’ll be a prime candidate for future creative management positions and leadership roles at other companies (if that’s what you’re aiming for).

What a great topic!

You’re totally right in needing to be the first to raise the subject of money and you do want to anchor higher than you’d like, so you’ve got room to negotiate down when they invariably counter offer. 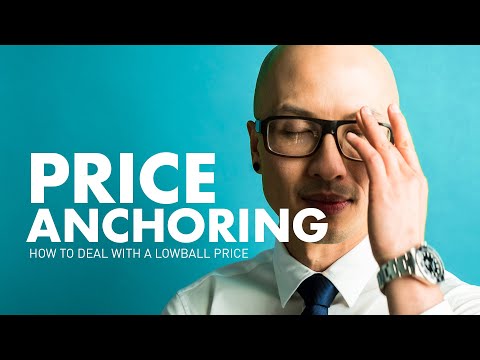 Thanks Just-B. I appreciate you taking the time to offer such thoughtful feedback. My goals have always been to work in a management position for a while and eventually teach so this job, while not my ideal industry, sounds like a great opportunity.

Thank you for the video Pluto. That advice is what I’ve been coming across but it explains anchoring more clearly. I just wonder how much higher the ideal anchor is. I would assume at least 5k above target, but maybe 10k above? I’ve also read that even if they make an offer you want to accept you should still ask for time to consider it. I’m not sure how I feel about that advice.

I think asking for higher salary very much depends on how much your services are really valuable and irreplaceable. Other than that, I don’t think there is an universal rule.