You’d think Dior would be able to afford to pay someone who knew how to actually kern a single word.

Dammit. Once seen, cannot be unseen.

Understandably, I own no Dior product. Never even noticed the logo.

In addition to the kerning, the whole ad seems off to me. Then again, I’m likely not the target audience since I have no desire to smell like Johnny Depp.

In some of those pictures, Johnny Depp looks like he doesn’t like the smell of Johnny Depp either.
Are these ads pre-battering-charges?
Did you read the article that goes with that link?
Atrociously written.

Did you read the article that goes with that link?

I didn’t. I’d just seen an ad on tv, after a couple of glasses of a fairly lively New Zealand Sauvignon Blanc and out popped a soupçon of typographic indignation and the need for a mini rant. I just found the nearest example to hand. It worked a treat; I felt purged, we continued to relieve the bottle of its contents and watched the rest of the film at peace.

Even without the typographic savagery, those ads drive me up the wall. The imagery is so extreme and overt. It’s almost back to Marlboro ads of the 50s. 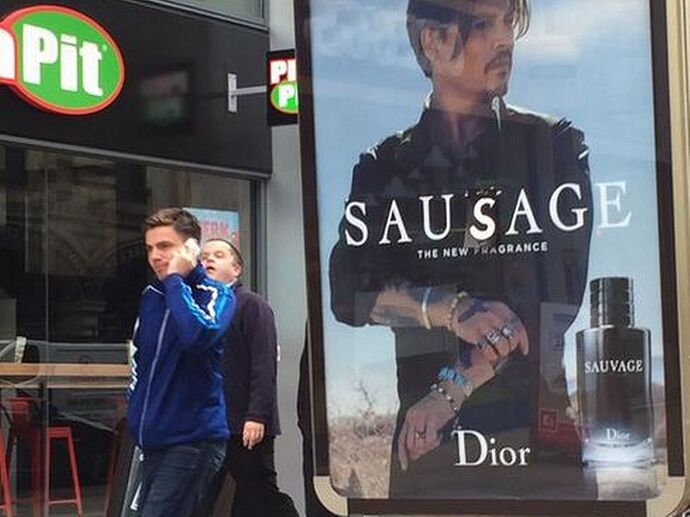 Not if you are referring to salami.

I have, but it makes me giggle like a schoolboy every time.

Did you read the article that goes with that link?
Atrociously written.

The story telling isn’t nearly as bad the non-existent editing. It reads like a first draft.

The publishing industry has probably been at the center of my design career. I’ve worked with some very talented writers over the years — many of whom were terrible at writing, but great at telling stories.

The unsung heroes are the copy editors, whose job is taking well-told stories and crafting them into well-written text. It takes two different skills from two distinct personality types — the first is more focused on creative processes (the artist) and the second centered around detail and structure (the bookkeeper).

They often have a love-hate relationship with each other.

Writers get most of the credit and often suffer from large, fragile egos. They’re aware of their weaknesses, and know their success depends on having their bad writing washed and ironed. They can be dismissive of copy editors as rule-following non-creatives. They cringe as their run-on sentences are chopped to bits and their scrambled grammar deciphered and cleaned up.

Copy editors often admire writers’ abilities to tell stories, but sneer at their inattention to the rules of writing. Copy editors often lack a creative spark and tend to freeze up when asked to write something from scratch. Give them someone else’s writing and they’ll enjoy every second it takes to criticize, chop apart and reword it.

I’ve often seen old grudges break out into screaming matches between writers and copy editors, but each knows their success depends upon the other, so they eventually reach an uneasy compromise.

that about made me choke on my tea