I remember when these first came out. Haven’t touched one in probably as many years.
Here’s to 50! 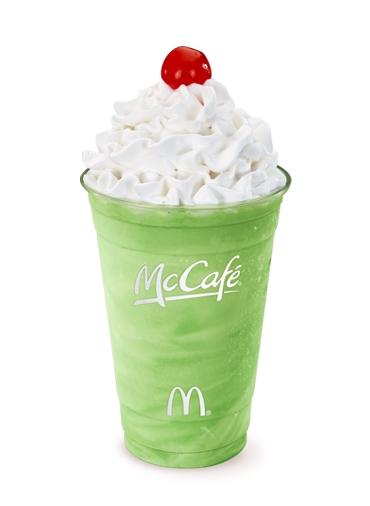 McDonald's is going green this spring in time for St. Patrick's Day 2020

My friend Andy Abelman invented that shake in the 70’s while working in NYC
(after reading the linked story)
now i click the link and find out he is a fat liar, or they are fat liars.
he probably was working there at the time and used that for an intro as a feather in his cap.

Would you believe I’ve never had one?

… and as for folks lying…
I went to school with a girl who was cousins with the Osmond tribe. She moved to our town from Utah when we were about 12. She would regale us with stories of growing up together and spending summers with them. They were detailed enough that none of us ever thought it was anything but genuine. This was during the time that it was a treat to see a picture. They were rare and saved for special occasions … so we never even asked for any type of proof. There was no internet or social media. We’re talking the mid 70’s. So, we took her for her word. A few years later at graduation she informed us all what suckers we had been. It was actually a valuable lesson. I’ve never taken anything at face value since

Anyhoo… back to the Shamrock Shakes. I don’t drink any shakes. I’ve had sips here and there … that’s all I can handle. But, never a green one. It’s not that I don’t like shakes … they really … really … don’t like me

I think my friend, Andy was 17, worked at a McD’s and made the shake. the manager took the credit for marketing and processing the shake.

I went to school with a girl who was cousins with the Osmond tribe.

One of the non-singing Osmond brothers (he’s deaf) lives in the next town over from where I grew up in rural Utah. He was a mail carrier, but I think he’s retired now. It’s not unusual to run into Osmonds here in Utah. Their families are huge, and they all have that recognizable Osmond look.

I’d like to think it would be really difficult to come up with a mint-flavored, green-colored milkshake using ingredients found by a 17-year-old at a McD’s franchise location…at least, I hope so…

i remember Andy being so confident and honest telling his shake story a couple years.
he said he was fooling around with making something different for the menu, his manager like the shake, and they went corporate.
i was checking to see if his nose grew, which it did not.