Like the blue or gold dress image from a few years back, this image is circulating on the Internet. Some people say the shoe is green and grey, while others see it as being made up of pinks, greys and whites.

It’s easy to open up in Photoshop and measure the colors, which really are greens and greyish greens. Why some people see pinks, I don’t know.

In one of the non-designer Facebook groups I belong to, almost half the people claim the shoe is pink or that it switches back and forth between being pink and green. Since most of us here make a living out of making color choices, I’m wondering if many of you see pink instead of green. 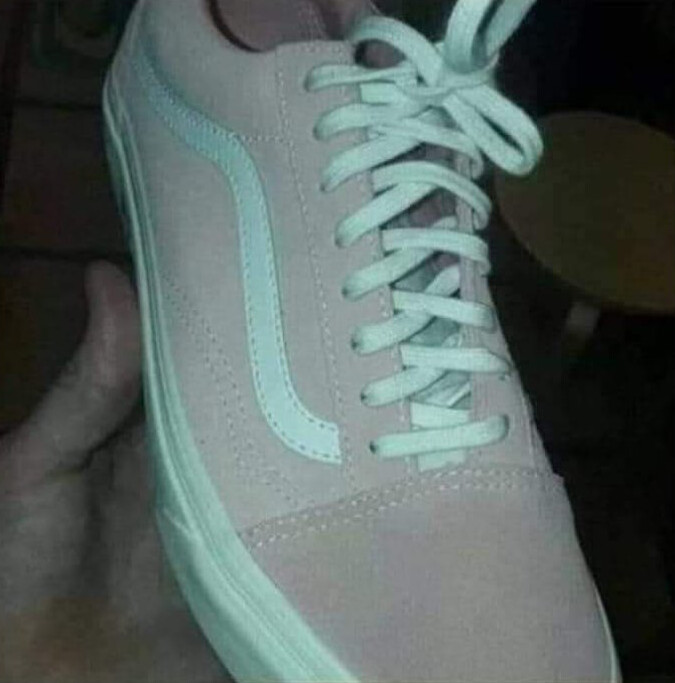 Okay, this is making me tense! I see pink. Opened it in Photoshop and started sampling. Everywhere I click samples a color that looks nothing like the pink I see. In fact every click seems to produce something of a subtly-toned gray. The farther in I zoom, the more the image looks like those sampled near-grays; the farther out the zoom, the pinker it looks. Dammit.

“Is this a trick question?” I ask a little suspiciously.

Wait, I see no hint of pink at all.

I’ve seen this both ways. Depending on time of day and lighting. When I very first saw this image a while back I would have sworn it was green … now this particular pic looks pink

At first, I saw pink, but I can see it as gray, too. My guess would be there is an optical illusion going on.

If you open the original photo in PS and sample the laces, stripe, and sole; they read as a mint green.

Our brains are possibly compensating by taking cyan out of the picture to subconsciously correct for the white balance since our brains know, or assume, the laces are white.

I opened the image in Photoshop and used the camera raw filter to set the white point of the image as the laces. Here is the resulting image. Sample the shoe colors in PS now, and they are clearly pink / mauve.

So it seems that someone monkeyed with the photo in an attempt to make it go viral or the camera this was shot with did a horrible job of determining the white balance. 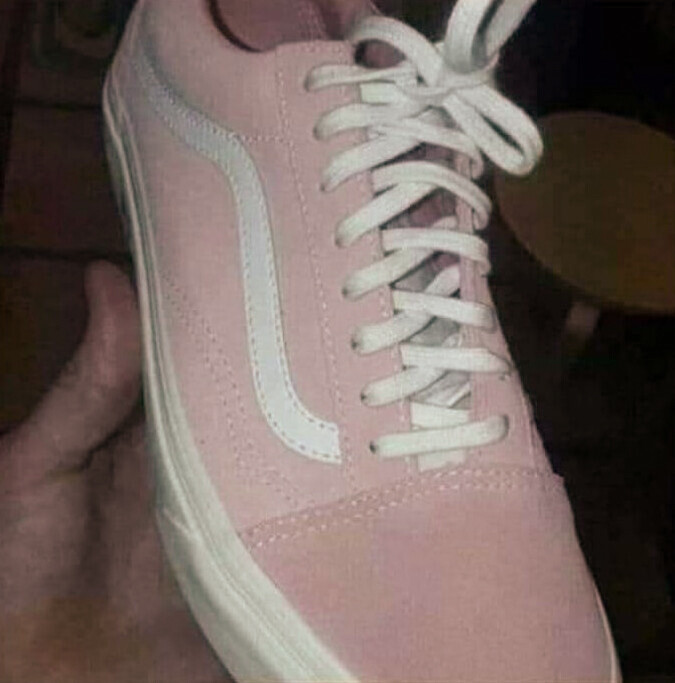 That’s interesting. Your color-corrected version shows the person’s hands as more naturally colored. I suspect you’re right, the actual shoe itself is pink, but the widely circulating photo has been skewed way off into the greens.

As you suggested, it seems likely that some people’s visual processing identifies the color problem, then does some sort of automatic color correction to bring it back to the original pink, while others, like mine, just see the actual colors in the image.

Out of curiosity, I opened the original greenish photo in Photoshop and just performed Photoshop’s automatic color correction — it converted the photo away from the green and made the shoe obviously pink, like yours.

I wonder what kind of algorithm there is in Photoshop to identify the overall tonal values of the greenish photo being way off. Whatever they are, a similar process must be happening in some people’s visual interpretation of the colors in the greenish image, which converts the colors back to what they should be.

I saw it as pink too!

Totally agree @Steve_O, I think our brains compensate for the colours around it, to arrive at positon on what the colour is.

Another factor to consider could be the colour settings of the screen it’s being displayed on as this will obviously vary from device to device.

I saw it as pink too!

That is really strange. I see absolutely no pink in it at all — just the light greens and greys that make up the badly toned image. It’s not until the color balance is corrected that I see the actual pink color the shoe probably is in real life.

btw … on refresh it appears the greenish/gray to me. Like I say … I’ve seen it both ways. And still do. One time one color … another time … the other color

… it’s the same as when the dress was popular and when this first made the rounds. I could always see both. Just depended on time of day and lighting. I thought someone was switching out the pics at first. It’s a strange anomaly for sure

I’m only seeing pinks. I just tried to find other versions of it and one theory I came across said it was a left-right brain dominance thing.

I see a pinkish tint to the original, I’m wondering if it isn’t due to complimentary colors. Where, your brain is trying to see the compliment to that light minty green which would be a light pinkish color. 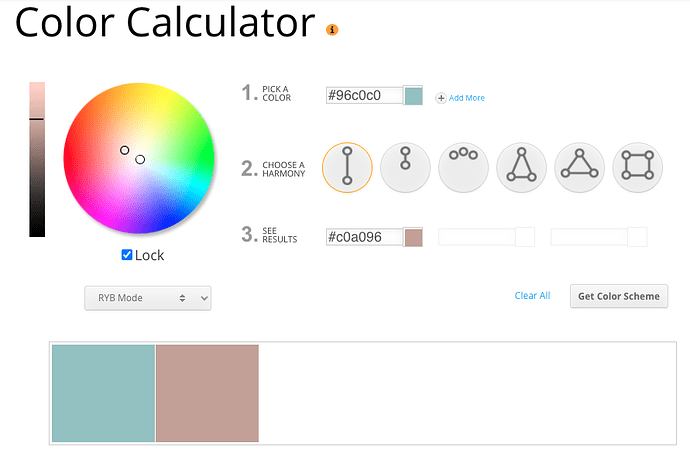 The original was not pink and I noticed the grey looking hand, so I suspected some sort of colour imbalance. I still didn’t see any pink and I’m wondering how other people did. It’s bizarre.

This is odd. Today I see pink.

I just see a bad photo

I think that it’s green and pink.

I saw grey and mint until I saw the second picture - after that I see now pink and white.

Thank you for messing with my brain!

Gray and more aqua than green!