So I was reading about this “hurricane proof” community in Florida (gotta retire somewhere, right?) 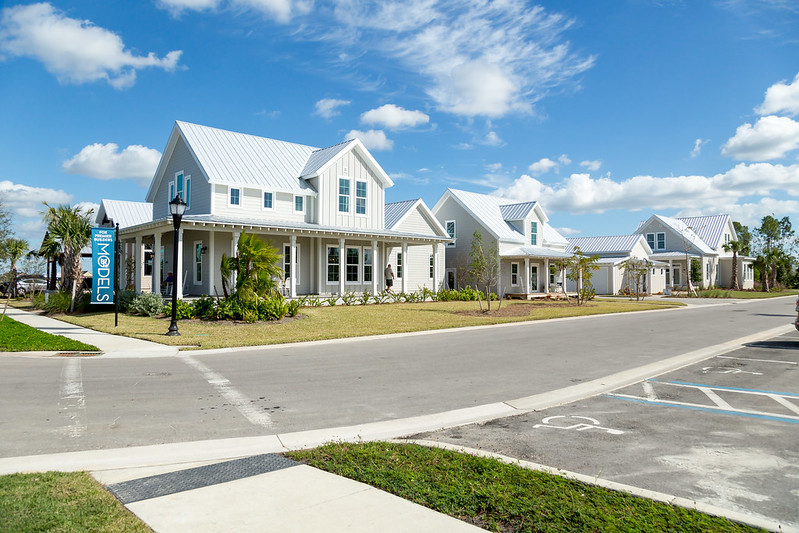 Solar-powered community kept the lights on during Hurricane Ian

Story at a glance A community in southwest Florida that relies completely on solar power did not lose power during Hurricane Ian. Babcock Ranch was sustainably designed to withstand major storms li…

Until I saw this.
While it’s overkill for the current amount of units built, that’s 870 acres clear cut and devoid of any flora and fauna (can’t see the ground, maybe it’s short grass, but more likely weed blocked and gravel.)
Makes me very sad. 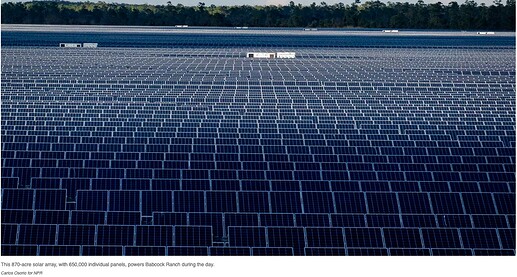 Unless people around here win the lottery, there will be no completely solar anything. Last I read each battery set up is anywhere from $15,000 to $25,000 and that’s just for one. That will only power a small portion of an average home. Most places are installing 3 or 4 set ups. I get mail just about every day offering financing for solar. They seem to think people in apartment buildings have any say over what gets installed on the building lol

It’s one of those things that sound great in theory. I love the idea of having something that can alleviate the strain of “big power” … but do we really want everything leveled for massive solar farms? I just don’t know what the right answer is

This story about the community in South Florida that survived the hurricane intact is interesting. However, The story has been misconstrued by many as a side benefit of solar power instead of the builder’s decision to bury all the power lines to prevent blown-over trees from knocking down power lines during a storm. Since the community buried its self-contained power grid, the power didn’t go out.

Many of the houses in our neighborhood have solar panels on their roofs. I asked the guy across the street about his. He said he would reach a break-even point with the cost in 15 to 20 years. Our house is ideally situated for solar panels, but from a purely practical cost/benefit point of view, it’s not worth it.

I’m not against solar energy, and I’m especially in favor of renewable energy. Still, I don’t see current solar technology using these panels as being environmentally friendly in the long run. Photovoltaic cells require various elements, such as indium, gallium, selenium, cadmium, and tellurium, which sets the stage for shortages of these not-especially-common and mined elements. In addition, I can’t imagine hundreds of thousands of acres of these things and dealing with them once they wear out and end up in a landfill or recycled in some way.

Finding space for them here in the western US isn’t an issue. There’s plenty of sunshine and wide-open areas for them in the deserts where nothing grows. Arizona and southern California are places where solar energy could and already thrives, along with thousands of wind turbines dotting the hillsides.

What all this really boils down to in my opinion is simply a growing world population needing more and more energy. No matter what, perpetual population growth isn’t sustainable.

I’ve seen farmers here mount the panels high up so you can walk underneath them. The grass can grow and sheep can graze on the same land. Outside of tornado areas, it’s a good solution.

Dotting the hillsides?
this is San Gorgonio. 4000+ turbines

I am sooo disappointed. I had envisioned a much better solution by now.

Studio Monkey that’s a great solution! Here I’ve seen lawn roombas keeping the grass under the units trimmed. Sheep (or goats if you could keep them from eating the wires) would be the perfect solution for the weed height problem. Not so much for the flora/fauna diversity thing. Here in New England, and especially in more rural areas, I see more and more farmland covered with these things instead of crops. That’s kinda scary too.

Dotting the hillsides?
this is San Gorgonio. 4000+ turbines

Another Southern California place even more cluttered with wind turbines is Tehachapi Pass between Bakersfield and Edwards Air Force Base. I drove that highway three years ago, and there must be at least a thousand wind turbines along the ridges in the canyon.

For that matter, the entire desert area southeast of the pass is full of solar and wind farms. The area is too large to show everything, but here’s a small segment of the area below. The dark patches are solar panel farms. Multiply this by a couple of dozen times in the surrounding area plus an equivalent area devoted to wind turbines, and enough power is generated to supply the needs of 2 or 3 million homes. 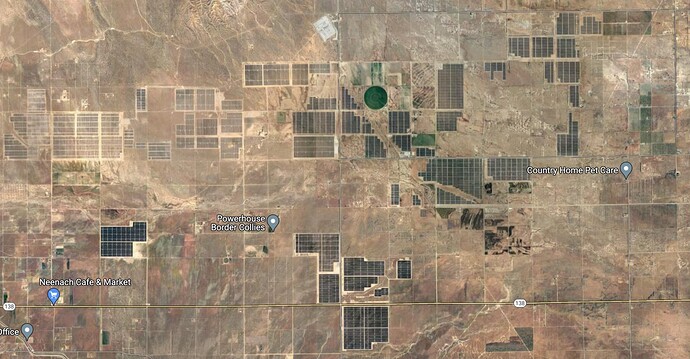 Equally amazing is this bizarre solar power generation facility below on the border of California and Nevada southwest of Las Vegas, visible from Interstate 15. Here’s an overview from Google Maps, plus zoomed-in details to provide better perspectives.

The circular structures are thousands of giant mirrors reflecting sunlight onto a tower in the middle where sodium (if I remember right) is boiled to power an electric generator. I can only imagine how many birds are vaporized by accidentally flying over these things. 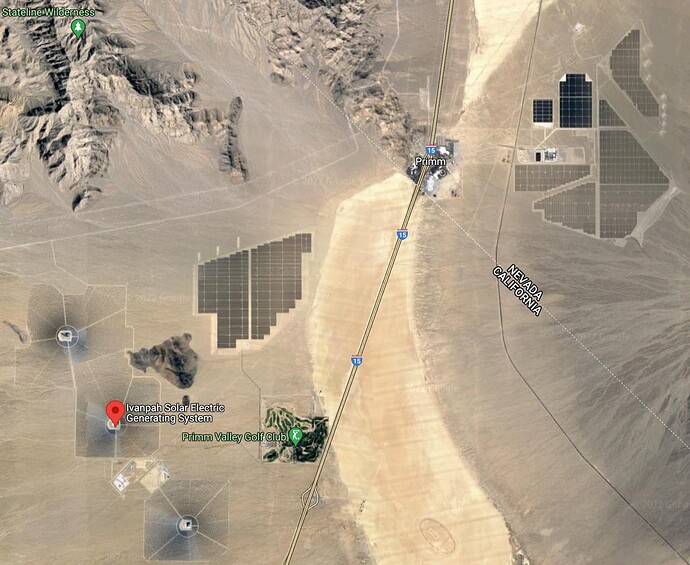 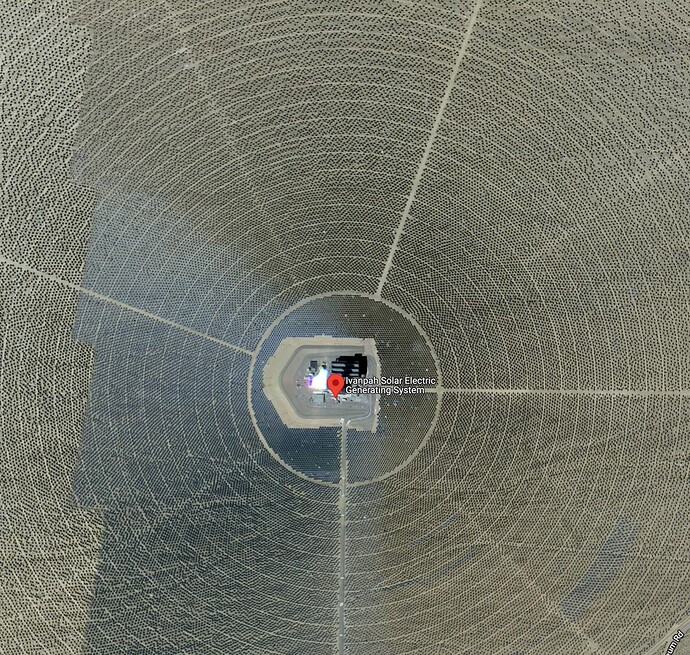 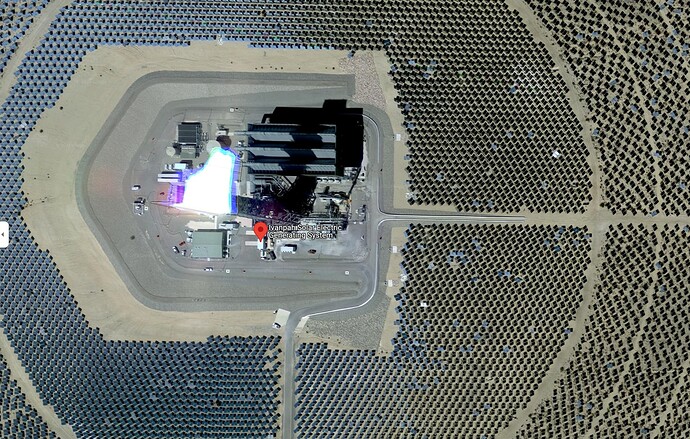 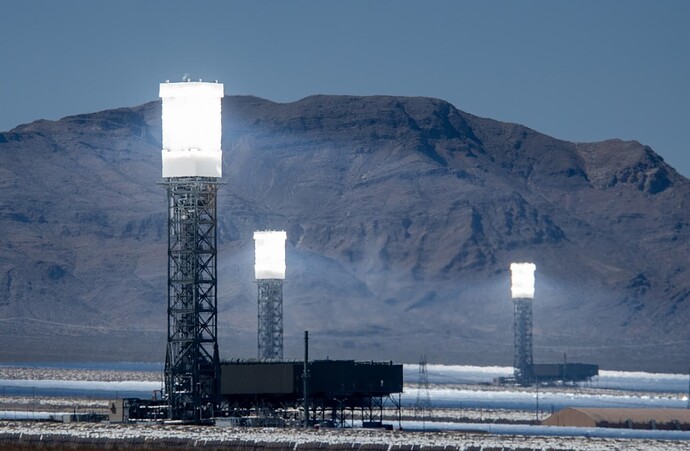 Saw this a while ago 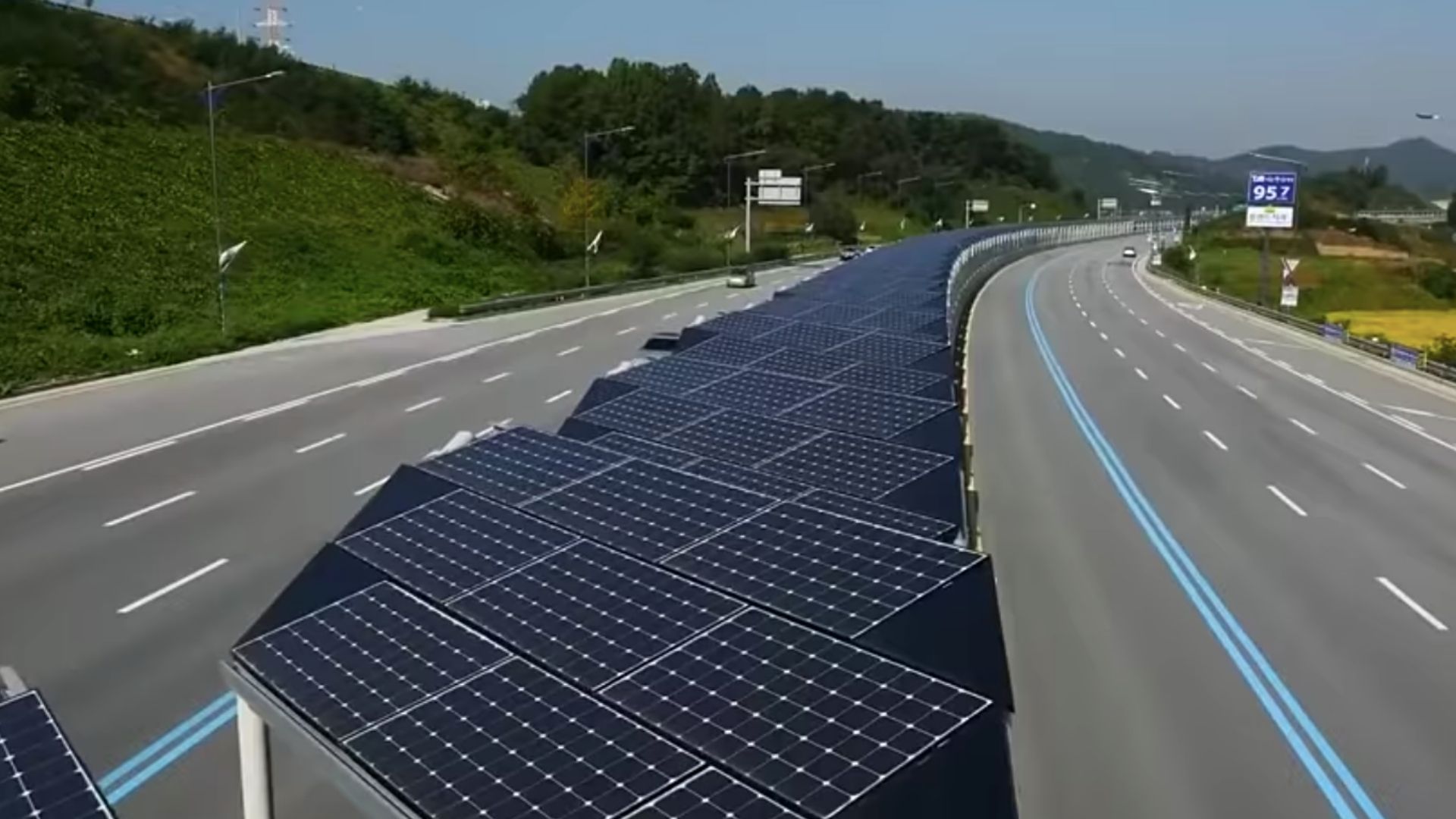 Putting a bicycle lane in the center of a highway is unusual; however, it produces more than enough electricity to power the lighting.

I’d read about Ivanpah a while ago. Interesting stuff. Especially the Streamers.
Quite an expense to make…steam.

I dunno why I started this thread. LOL!

Quite an expense to make…steam.

That’s still our best way of generating electricity. Even nuclear plants use the heat to make steam.

Yeah, I know. That was kinda my point.

Around here, there are a lot of old mills converted into apartments. I just shake my head because they have turned their millponds and penstocks into a water feature rather than an electrical generator.

I think what started this thread in my head, other than looking for a place to retire, was an ongoing argument we’re having at work over where the electricity is gonna come from in 2035 when this state is going to ban the sales of gas-powered cars. Yet they killed a pipeline project to bring in natural gas for a new power plant, and next month, our electric bills are going up from 50-80%. Maybe the new turbine power will be a pedal-powered generator in your garage. You wanna drive somewhere, better start pedaling that generator, or hope the snow is off those $$$$$ solar panels and the sun comes out.

Part of me wishes I’d just go live in a forest somewhere and live off the land.

The technology for fusion reactors is still probably several decades away, but I’ve been reading that since I was a child.

When researchers finally figure out a practical way to keep deuterium and tritium fuel contained at several million degrees in a sustained fusion reaction, the world’s energy problems will be solved. Then again, I’ve been reading that for decades too.

The technology for fusion reactors is still probably several decades away

If ever, isn’t this how the story goes, the oligarchs and people like that buy the rights to it and keep it under wraps cos they are making too much money from oil and other energy.

I feel we have the technology now to do things like that. But there’s too much money to be made elsewhere - and it would put the oligarchs out of business very quickly.

Fusion-generated electricity would all but end the need for fossil fuel and cause a fundamental reordering of the energy industry (well, that and better batteries to store the energy). But I think the problem is technical rather than the fossil fuel companies stifling the research.

Sustaining 100-million-degree temperatures in an enclosed space is the problem. A physical container won’t work since it would instantly vaporize into plasma. Containing the reaction inside a space defined by a magnetic field is the most promising method. Building a workable machine to create a magnetic bottle to hold a swirling mass of 100-million-degree plasma generating horrific amounts of energy as hydrogen nuclei fuse into helium is something out of Star Trek.

Even so, the benefits of achieving a controlled and sustained fusion reaction are so enormous that governments worldwide are pumping billions of dollars into the research. For example, last year, the ITER prototype tokamak in the UK achieved a 5-second, sustained fusion reaction burst that produced ten times more energy than required to contain the reaction. This technology is far larger than the fossil fuel industry can stymie — limitless, safe, pollution-free energy.

ITER - the way to new energy

ITER is the world’s largest fusion experiment. Thirty-five nations are collaborating to build and operate the ITER Tokamak, the most complex machine ever designed, to prove that fusion is a viable source of large-scale, safe, and environmentally... The old joke is that nuclear fusion is always 30 years away. However, the dream of plentiful clean energy is no laughing matter as we meet an ITER researcher to catch up on progress at the reactor facility. By creating light and heat through nuclear...