The Typographic Legacy of Microsoft

Fell down a YouTube rabbit hole and ended up watching this, actually found it really intresting so thought I would share: 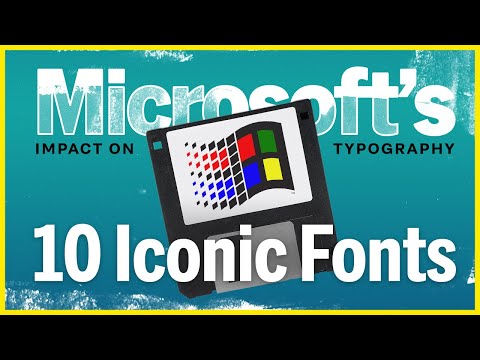 Microsoft’s involvement in good and bad design — especially typography — is an interesting one.

Many designers have looked down on Microsoft due to their earlier inattention to things like good interface design and the niceties of aethetics. This viewpoint is changing as time passes and as Microsoft’s early missteps slip further and further into the past, but the stigma still taints a more accurate view.

Heading back to the 1980s, Microsoft was a small company run by a bunch of geeky programmers. Their programming and business decisions were highly successful, but that success owed nothing to their non-existent sense of style.

On the other hand, style and good typography were core principles for Apple and Adobe. Their uneasy partnership invented desktop publishing, which changed the whole field of graphic design.

Microsoft lagged far behind, even though they were far more financially successful and ubiquitous. The persistence of DOS was a visual abomination, and the early versions of Windows were incompetent and ill-conceived attempts at user interface design. For example, installed fonts were specific to individual programs rather than across the operating system. And Microsoft never considered that type families might contain additional weights other than bold and regular, which forced kludgy workarounds.

Eventually, though, they got the hang of it. I suppose they came to realize that the company’s future depended on appealing to the public and not fellow computer geeks.

With Apple, good design was a core value. With Microsoft, it became a core business objective. Whatever the origins, Microsoft came to embrace typography — sometimes with questionable insight and results, but they still made significant contributions.

For example, they commissioned Matthew Carter to design Verdana and Georgia specifically as typefaces designed to look good and be readable on lower-resolution displays. Microsoft also partnered with Adobe to improve Apple’s TrueType format by creating the more advanced and capable OpenType format.

That was interesting. Thanks for sharing.