We all know the term UFO, but I’d never heard of a USO. My coworker accidentally noticed something on google maps while looking for something else and it’s definitely odd and actually (relatively) close to where I live and work. If you go to google maps and zoom in off the coast of Southern California, by Malibu, you’ll notice an odd shape in the rendering of the ocean floor, I guess. The weird thing is that if you search for “USO base” on google, it actually gives you a location

Here are some screenshots of what I’m talking about. Has anyone else seen this or know anything about it? There isn’t a lot of information about it but I was able to find a few articles where scientists say it’s a natural formation. Just thought it was interesting enough to share.

By the way, I’m not a UFO, conspiracy guy…more of a, of course it’s possible there’s other life out there in the universe, somewhere. 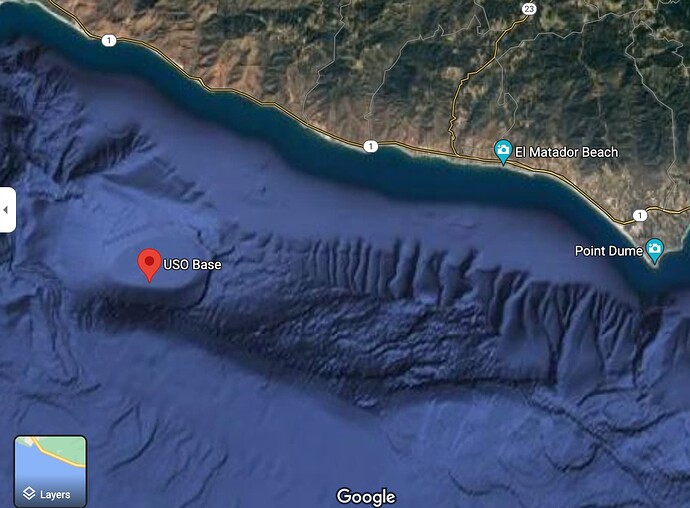 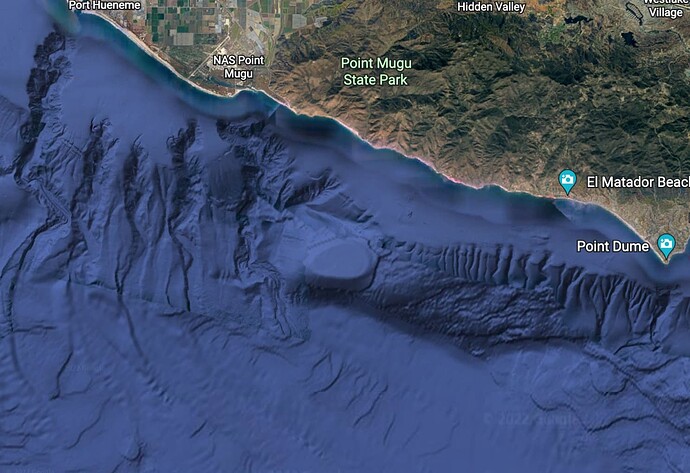 Your friend noticed something that’s been discussed in the pseudo-science world as a submerged alien structure of some kind for several years.

Of course, that’s nonsensical. I’d read about it before but had forgotten most of what I read, so I looked it up again. It’s an unusual-looking geological plateau having to do with the complicated geology of southern California at the edge of the continental shelf.

Sycamore Knoll: A wave-planed pop-up structure in a sinistral-oblique thrust...

At the boundary between the Western Transverse Ranges province and Inner Continental Borderland of Southern California, strain is partitioned across t…

Cool! Thanks for digging that up. I had never heard of this until now.

Of course that’s what “they” tell you…

Problem with aliens visiting Earth is something called ‘The Great Filter’, which is one outcome of the Fermi Paradox.

Basically, life from the earliest stage to reaching the highest levels of the Kardashev scale The Kardashev Scale - Type I, II, III, IV & V Civilization
The theory basically proposes a barrier to development that extraterrestrial life being detected would be really really rare.

I used to think the Universe is so exapnse there MUST be alien life out there. And I believe there is, there’s active planets/moons in our own solar system.

They once believed that the deepest darkest oceans were too cold and too deep (pressure) to support life. But once they got down there they found life, supported with light and heat from cracks the Earth - and they were amazed.

There’s water on other planets, and there’s geothermal activity, and anywhere on Earth there is water and heat there’s life.

But after understanding the shear scale of the Universe, the immense amount of Energy it would take to get to the other side, or to another solar system, it’s likely not possible.

Alpha Centuri is the closest, and it’s 4.35 light years away - that means travelling the speed of light it would take 4.35 years to reach it.

But we cannot travel that fast. And the old problem of the closer you get the speed of light the slower time gets… which is problematic.

If you travel at 90% speed of light, 10 minutes would pass.
But for a stationary person, they experience 20 minutes!

Anyway ---- I do believe Aliens exist, or existed in the past and will exist in the future.
But I do believe the Great Filter. That intelligent life is rare.

And we’re probably more like ships in the night.

I’d rather believe there is other intelligent life out there. Life so intelligent, they have put warning beacons around this solar system not to bother with this one. 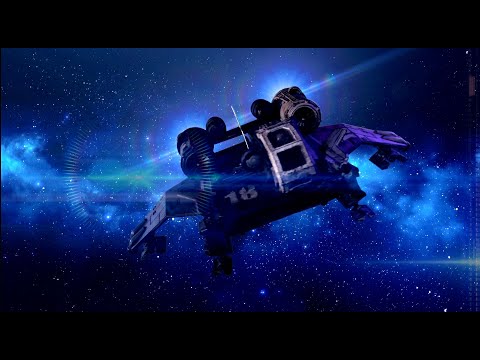 According to the Drake equation, it is likely that there are other civilisations out there. The distances involved, however make it unlikely that we will ever meet.

We are not alone, but we may as well be.

Until we learn to fold space (or something.) Physics always seemed like straight line theory to me. Sometimes the shortest distance between two points isn’t the apparent straight line. I remember once having to argue for credit on a test question, the shortest distance between two cities on the globe. The answer the teacher wanted was to go over the northern pole. My answer was the chord distance, through the earth. Hey, he didn’t say it had to be possible, just the shortest.

Dr. Billy Graham said years ago (my paraphrase), that in a universe with billions of galaxies, each containing billions of stars, the likelihood of intelligent life elsewhere is very likely, with one important difference. This life is likely in a “sinless” state, since the earth is the only planet that has been contaminated by sin. This being the case, we would be far more dangerous to them than they would be to us.

There are all kinds of sin, depending on who is doing the defining. Any place with sentient beings is likely to have some sort of sin in the eyes of another.

It’s more like approx two trillion galaxies, and 200 sextillion stars in the universe.

the likelihood of intelligent life elsewhere is very likely

A belief with reasonably sound foundation, given what we seem to know, and conjecture naturally progressing from it.

This life is likely in a “sinless” state, since the earth is the only planet that has been contaminated by sin.

A belief with absolutely no foundation in known fact. The language alone disqualifies it.

I’m tempted to dive into this discussion since physics was my major in college for the first two years (got an associate degree in it) before starting over and switching to art and design. I had dreams of becoming an astronomer and somehow focusing on astrophysics. I gave that up, but it’s still been a lifelong interest to me.

Anyway, if I get started down this road, I’ll not get anything done today. Besides, I’d be repeating much of what @Smurf2 has already said.

What I’m definitely not going to do is debate religion and its relationship to science. Been there, done that, everybody leaves upset.

What I’m definitely not going to do is debate religion and its relationship to science.

Yes, I hope my post won’t have spurred such a thing. But taking Graham’s assertion simply on its face, it makes little sense to admit we can only call the existential aspect of the theory “likely,” then to follow that with something that could not be known, presented as absolute fact about the nature of that presumed existence.

Some difficult, but fun reading on such things, for anyone interested:

Beelzebub's Tales to His Grandson: All and Everything, First Series (Compass):...

I remember about 20-odd years ago I was going to a film festival held in Hollywood, for a then little-known (some would argue still is) film-maker, Kevin Smith, and his sidekick Jason Mewes (Jay and Silent Bob). My friend was more into it than I was but I was the tag-along.

On that trip I brought with me (and I don’t know why I was only 20) a book called ‘The Theory of Everything’ by Stephen Hawking.

It was a pretty long trip across the pond. And had about 12 hours maybe 16 hours.
I didn’t make a dent in it.

My friend is a bit of a lightweight, so after a days sightseeing he would go to bed. I’d be left sitting up reading this book.

I read it every night and was up before him every day we were there.

We got the bus from Hollywood to Vegas - cos on the map it was like 6 inches away. It was 8 hour drive by bus…

I read the book some more as we went to Vegas, my friend slept, only waking on the stops for food and toilet breaks.

We got to Vegas, and neither had booked a hotel. So we went hotel to hotel looking, eventually getting a room off Freemont street, in what can only be described as ‘craic-town-USA’ where my friend once again went to bed.

I went down to Freemont street with my book, and here I was sitting in a Casino on Freemont Street, with my book ‘Theory of Everything’ by Stephen Hawking, at 20 years of age.
I’m sure the cameras were on me for any gambling.

We spent 3 days in Vegas, and I spent every second reading the book.
We got on the plane to go home, and sure enough, he slept, and I read.

Eventually, we landed and I got to the last page and I closed the book.

My friend looks at me and says, you finally finished reading it, ‘Was it good?’

“I have no idea, I didn’t understand a word of it!”

Having the focus necessary to read a rather dense book in a casino in downtown Las Vegas is an impressive feat in its own right.

A few years ago, I backpacked into the Grand Canyon with some friends to camp overnight at the Havasupai village in canyon. The next day, we hiked down a river to the very bottom of the canyon where it merged with the Colorado. It was absolutely and indescribably stunning.

After the two-day hike out, we managed to make it to Las Vegas on the way home. We were dead tired, so we got rooms at Circus, Circus on the Strip.

The contrast between the serenity of being alone in a remote section of the Grand Canyon surrounded by billion-year-old cliffs and staying overnight at Circus, Circus was shocking and disturbing.

For weeks, I was having dreams of fifty-foot-tall clowns welcoming me to “The World’s Largest Buffet” while other clowns hoisted barrels of liquid food into giant troughs. Of course, this was accompanied by bells, flashing lights, smoke, and zombie-like women with cigarettes dangling from their lips who were glued to slot machines. I don’t like Las Vegas.

Been twice. Probably wouldn’t go back.

But Grand Canyon was stunning, flew a Cesna over the Hoover Dam and into the Grand Canyon.

A disgraced charlatan who for some reason till holds the attention in some corners of American society. This statement is a bonkers as the rest of his pronouncements.

Are you thinking of someone else? We have lots of disgraced preachers. But, Dr. Graham is a much beloved figure over here … even by us heathens

Now his son on the other hand is an entirely different story (as far as I’m concerned).

Maybe you are thinking of one of these four who fell from grace in a HUGE way but still manage to have people worship them.

The list goes on and on with slimy characters. I would say more but, I don’t want anyone to think I am bashing their religious choices … that’s none of my concern

We have lots of disgraced preachers.

Indeed - maybe ‘disgraced’ is an exaggeration in his case, but he was certainly controversial. I am afraid I consider all ‘preachers’ to be charlatans.