Unsplash, the big supplier of user-uploaded, free-to-use photos, just announced they were being bought by Getty Images. 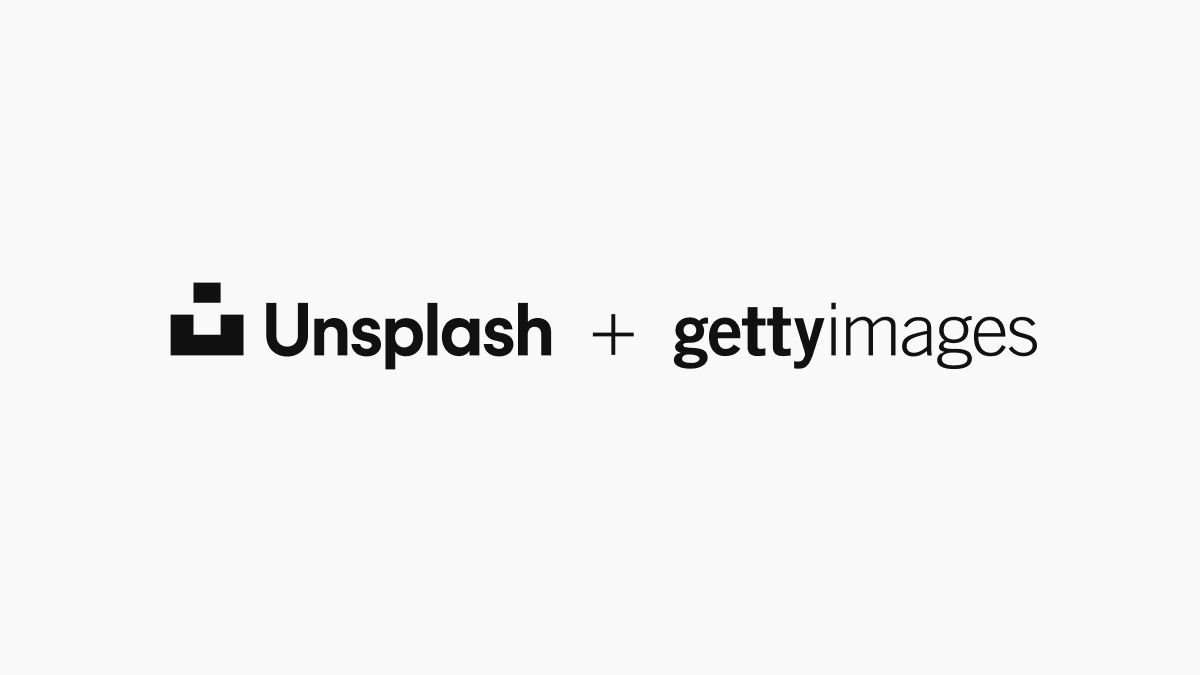 Unsplash is being acquired by Getty Images

I’m excited to share Unsplash is being acquired by Getty Images today. The reason I’m excited about this acquisition is because it’s not goodbye, it’s about acceleration. This is not one of those tech acquisitions where the company is bought to be...

Of course they’re claiming this will be a good thing, but seriously, what motive could Getty possibly have for buying the very company that directly threatens Getty’s business model. However, it’s spun, my guess is that Getty Images will quash and monetize Unsplash in whatever way they feel is necessary to eliminate the threat.

Either way, though, it’s more bad news for photographers, who, like graphic designers, are bearing the brunt of low-cost, low-quality crowdsourced amateur work undermining the profession.

So…
Free photo sites aren’t putting photogs out of business?

Don’t worry. The images are staying free.
But
Have you seen how UnSplash is monetizing?
They are working with “brand partners” to place product in stock shots. And those stock shots get preferential listing at the top of a search. So if you search for a soda bottle, your returns might net some top brand. Near as I can tell it isn’t implemented yet, or if it is, they are darn sure gonna have to better identify which images are ok to leave trademarked branding. Usually we have to retouch that out so we don’t even consider them.

So…
Free photo sites aren’t putting photogs out of business?

That’s what my poorly worded second paragraph was sort of getting at, which I threw in as sort of an afterthought that I didn’t fully explain since it would have taken the whole post down a rabbit hole.

Going down that rabbit hole…

Yes, photographers have had a rougher time of it than graphic designers due to digital cameras, photoshop, Photoshop, cheap stock photo sites, and the free photo sites. I would guess that somewhere around 80% of the photographers I’ve known have moved on to other things because their business has all but dried up. Wedding photographers are probably doing alright, but that’s about it. Whether free photos or cheap royalty-free stock photos, there’s either no money in it or just pocket change, which is what I was trying to say.

There are a couple of other current threads on this forum where the original poster is looking for free photos, mentioning the cost of royalty-free photos being too high and the rights-managed Getty photos being ridiculously expensive. This is what it’s come to for photographers — nobody realizes what it takes in both time and expense to shoot a good photo.

There’s travel, equipment and, usually a half day or even a full day spent on a location shot, and that doesn’t even include the cost of models, support people or the post-processing work. People have come to think of photos as being things that ought to be free — any charge at all is too much. And then they complain about the quality.

Over the years, when I was the CD at various agencies and publications, we would routinely hire photographers. I remember a few location shoots where the photographer charged over $15,000 for a day’s work. Today, I’d be hard-pressed to justify that kind of expense when I could likely find somebody’s passable snapshot on iStock for $15.

At the newspaper where I used to work, we had somewhere around 10–12 full-time photographers going out with reporters on stories. Today, reporters are pretty much just expected to go it alone and shoot a passable photo (and video) with their smartphones.

So as I mentioned, no matter what happens with UnSplash and Getty, photographers will get screwed.

I don’t take Getty at their word. Yes, what they said about the photos staying free will continue to be the case since they can’t change the agreements they had with the “photographers” who uploaded the photos.

However, looking down the road, I’m pretty sure that UnSplash won’t be what it is now for all that much longer. Instead, it’ll be more Gettyized in some fashion that veers off from the free photo model and just uses it as a hook of some kind for something else.

Case in point: if I remember correctly, iStock photos were at one time about $3–4 apiece and could be purchased by anyone on a one-at-a-time piecemeal basis. Today, now that they’re a Getty company, not only have the photos tripled and quadrupled in price, they’re no longer available as one-off purchases without plunking down money for credits to buy several more. And if you’re an agency with more frequent needs, those credits turn into yearly contracts that start at several thousand dollars. Of course the other royalty-free stock sites are doing the same.

We’re in a situation, whether photographers, illustrators or designers, where a few companies, like Getty or Fiverr or take your pick, are raking in billions of dollars while their crowdsourced content creators scrape by on pocket change.

The credit system, I don’t think that started with Getty and iStock. I remember Shutterstock and 123RF having it before iStock did. But the case in point is what I mean. iStock at $3-4 was part of the problem. Though I doubt any of the photographers are making any more money on the rising costs, the only people they have to blame is themselves for submitting imagery to such sites. Sure I’m gonna buy a $30 photo if it suits the purpose as well as a $300 RM image. They put it out there. (shrug) The $30 photo might not be as artfully arranged or as good on the resolution, but sometimes a simple representative photo is all you need. And don’t get me started on what happened to Corbis. That’s a national tragedy.

And don’t get me started on what happened to Corbis

I don’t think that started with Getty and iStock.

I’m not sure I remember not having to buy credits at any of the RF sites, but that might have been the case. It’s just that $12 (or whatever) worth of credits would buy three or four photos. Today, it’s a minimum purchase of $40 or $50 for those same photos. And like you mentioned, I’m guessing the stock sites, not the photographers, are getting the extra cash.

Today, it’s a minimum purchase of $40 or $50 for those same photos. And like you mentioned, I’m guessing the stock sites, not the photographers, are getting the extra cash.

Yes, the stock sites, not the photographers, make the bulk of the money. Consistently, I sell around 100 images a month on Getty/iStock and earn around $38 total. So, averaging 38 cents each download. As a non-exclusive contributor I get 15% royalty. And despite them offering individual photos from anywhere between $33 to $500 each, most people don’t license that way. The bulk of the sales are coming from subscriptions where the cost per image is pretty low, hence the low net for most contributors.

Back in the day when you had to buy a whole CD of images if you just wanted one image. A few photo discs from my personal collection from: Digital Stock, stockbyte, digital vision, Photo Disc, Banana Stock, Corel (yes, that Corel), Corbis, and Artville. 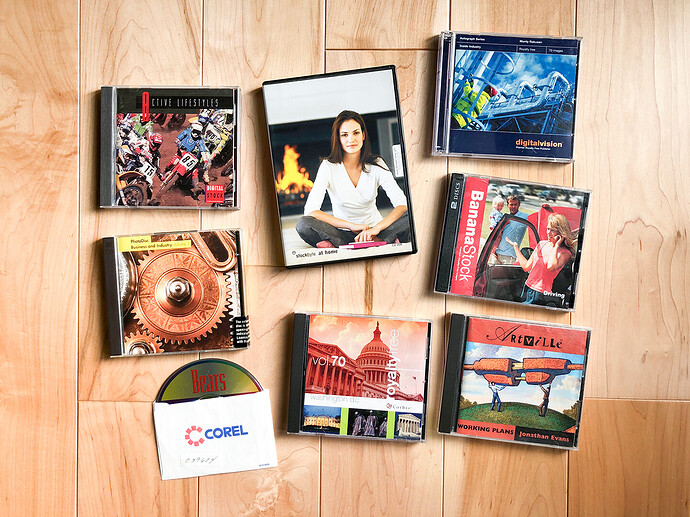 I have a few CDs with stock photos on them too. The Active Lifestyles Digital Stock CD you posted, for example. I have it and another containing photos of animals. I haven’t looked at them in years.

We had a whole bookshelf of PhotoDisk. They got pitched back in the mid-Aughts when we moved offices. Probably worth something to someone now. Were the images high rez on the disk? Not just comps?

I’m holding on to mine with the secret hope they become fashionable among hipsters… like vinyl records.

I remember back in the 90’s when I worked at a newspaper we’d get all excited when the new clip art books arrived each month. Completely forget what they were called tho. I still have an old book of clip art engravings that are still pretty cool. Stole that when they laid me off.

we’d get all excited when the new clip art books arrived each month. Completely forget what they were called tho

What were those called? It will come to me. I didn’t subscribe to the service, but a friend of mine did and I’d bottom his from time to time.

Were they called Clipper?

No, I remember now, it was Print Media Services, PMS

I did a little internet sleuthing. It looks like we’re both right, just talking about two different but related services. A company called Dynamic Graphics had two stock art publications. One was called Clipper, and one was called Print Media Services. Clipper is the one I remember using. 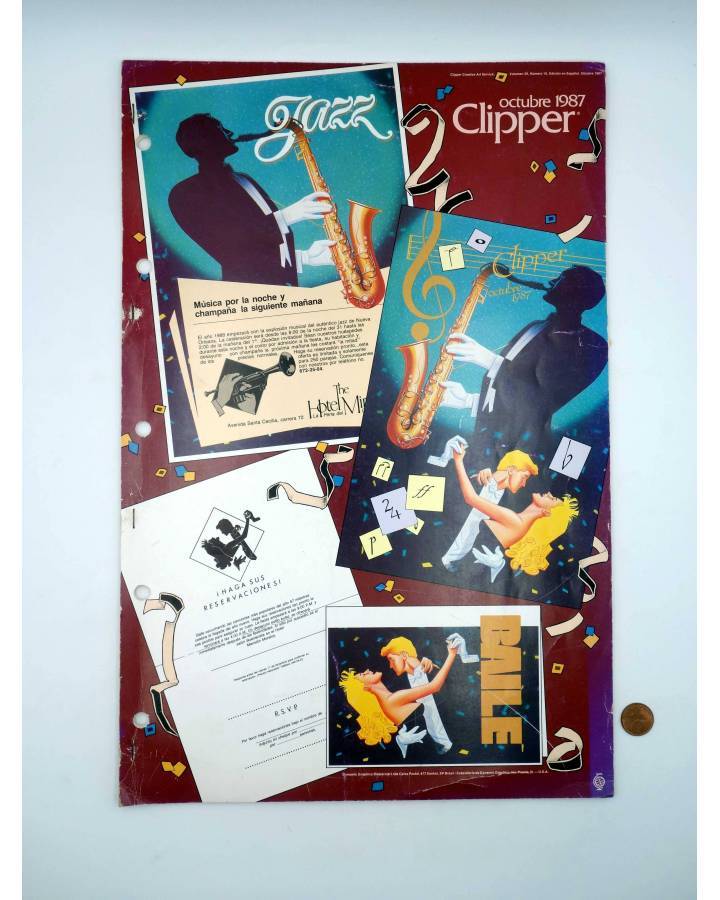 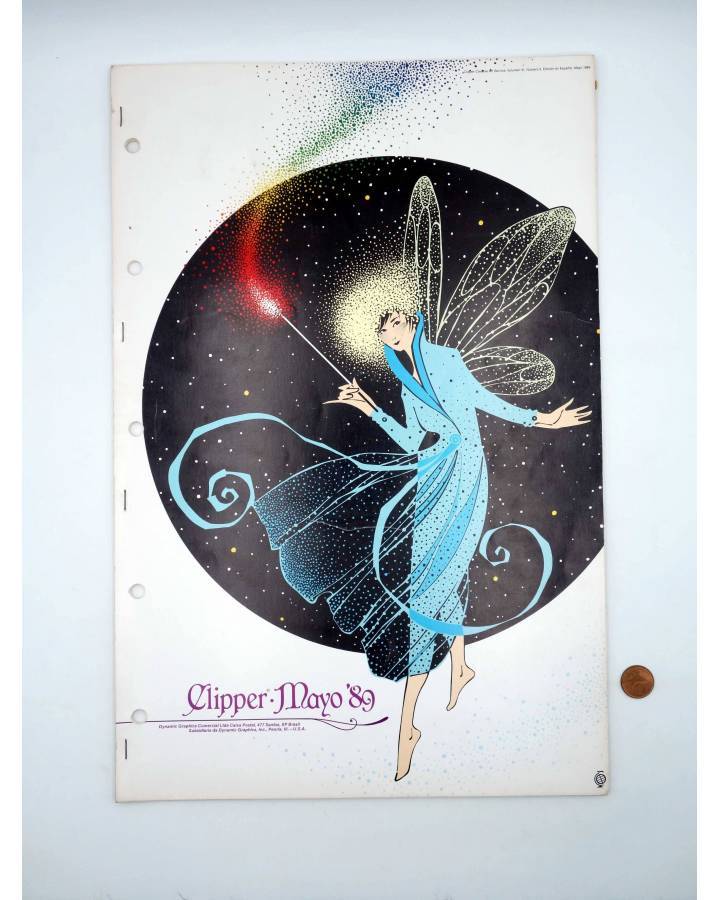 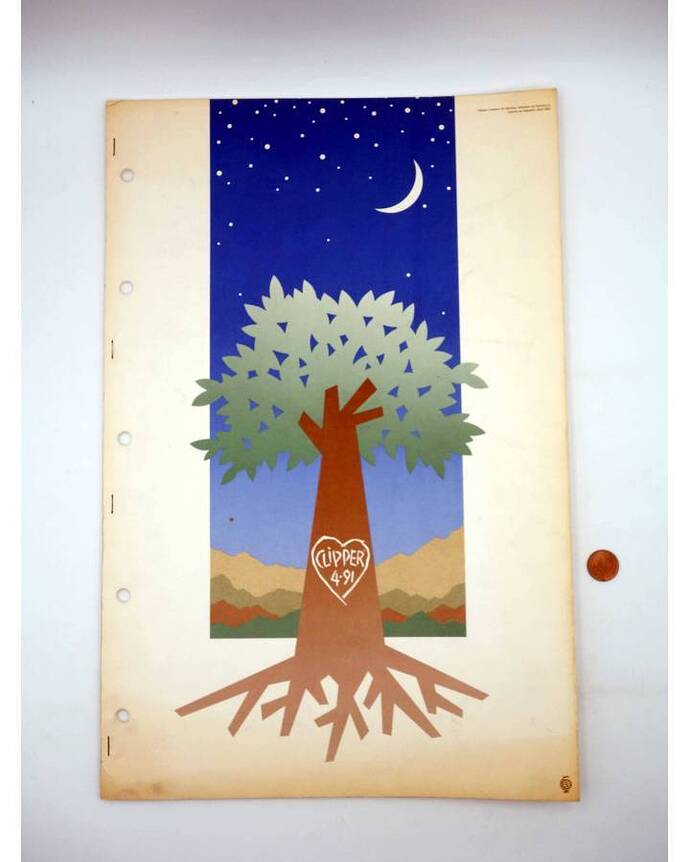 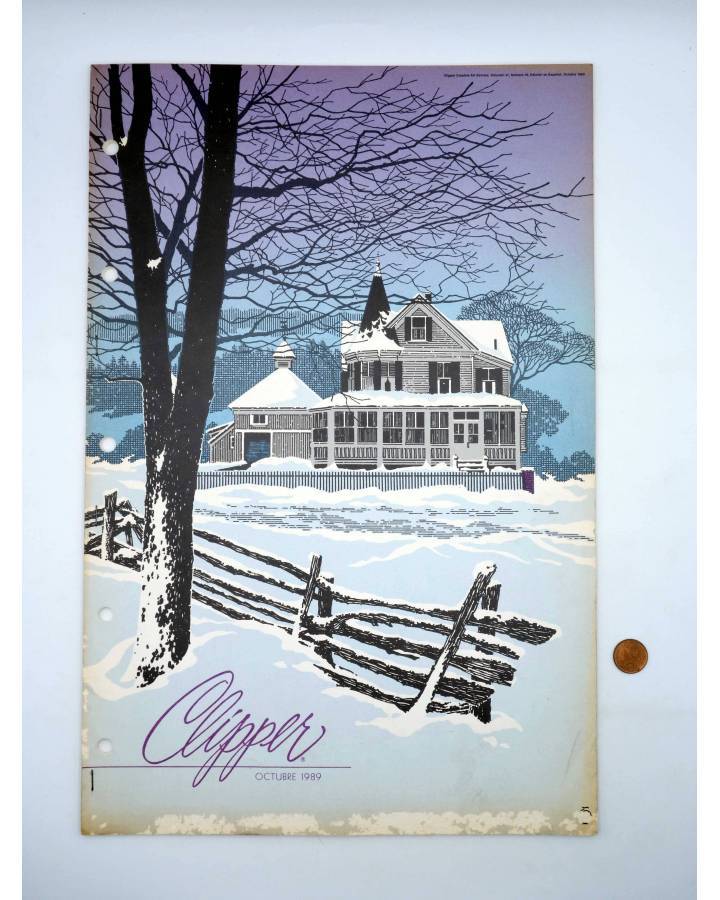 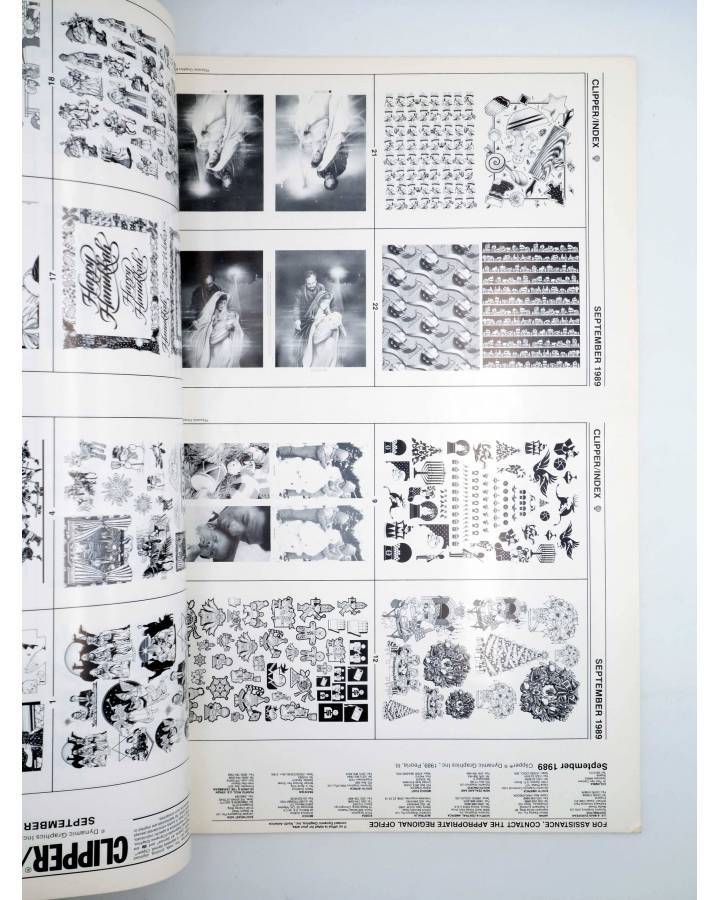 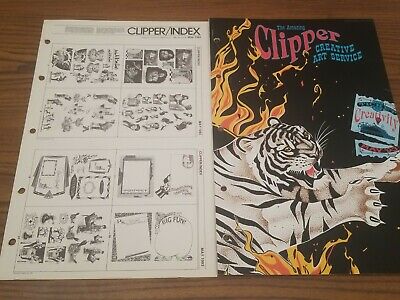 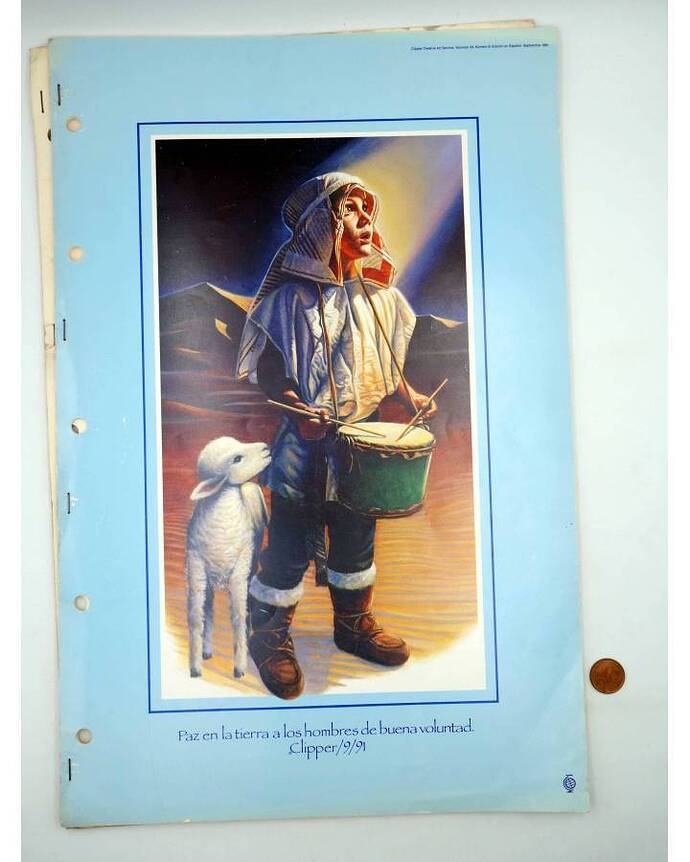