I’d like to set a number as a fraction in InDesign, but it seems the “Fractions” option has around it (not entirely sure what this means). Nothing happens when I select my number and then Open Type > Fractions. Any help? 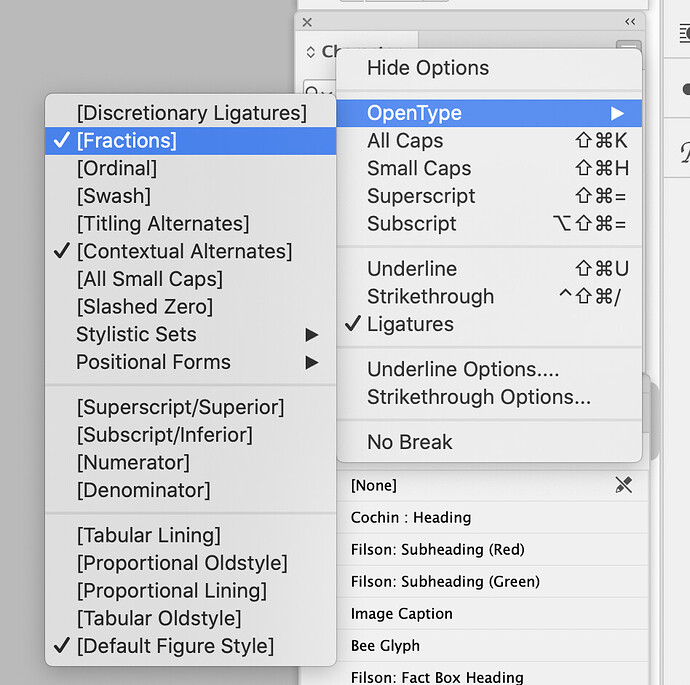 It’s because the font you’re using doesn’t support it.

OpenType fonts have a number of built-in capabilities, but they depend on whether or not the font designer included them. One of the OpenType features is the creation of fractions, as are all those other features. Very few fonts support all or even most OpenType features.

The Open Type > Fractions feature enables fractions when you’re using an Open Type font that contains built-in fractions. And, even the fonts that do include built-in fractions typically only have the 3 to 5 most common ones; 1/4, 1/2, 3/4, etc. If you need 3/5, it won’t happen.

I work on a lot of technical documents and recipes that need fractions of all kinds, and I use the awesome Proper Fractions script by Dan Rodney. With it installed, you can type any number, a slash, and any number, then select them and run the script to make a good looking fraction in any font.

OpenType fractions will create proper fractions from any sequence of numerals separated by a slash. The fractions themselves aren’t built directly into the font — only the components of the fractions, which consist of a set of both numerator and denominator numerals and a script with the instructions. The Unicode slots containing the standard fractions built into most fonts are still in the fonts, but the OpenType fraction feature doesn’t use them.

I’ve never seen it work, but then my font selections have been limited by style guides (on jobs where I’d need fractions), for almost as long as Open Type has been around.

Adding these features to a font can take several days (or weeks), but hardly anyone realizes they’re there. For example, I likely spent several days designing the numerators and denominators in Ely Rounded, but I’d be surprised if anyone’s ever used them. Consequently, most type designers don’t bother adding them, which is too bad.

I wish Adobe would make OpenType features little more obvious, but I think it’s a Catch 22 sort of thing. Adobe doesn’t invest the effort since few fonts contain the features, but font designers don’t bother since most graphic designers don’t know about them.

Adobe has done a nice job implementing the stylistic set OpenType feature, however, by having the little blue box appear beneath a selected glyph that enables a user to easily choose an alternate glyph that might be in the font.

One of my first jobs, of many, I was a designer for a magazine publisher and I used ligatures in the type because I didn’t like the way the fi was behaving, and my editor went absolutely spare when she “discovered” all the dots missing over the “i”'s - I rolled my “i”'s that day!

I also specifically sourced a font designed with fractions in mind for another magazine, and I was out-vetoed because the cost was slightly higher. I spent more time manually setting fractions than anything else, in the end it cost more in man-hours.

I definitely think these modern-day self-taught designers out of mom and dad’s attic working competitions definitely have no clue about typography.

There are a lot of good designers who do and a lot of good type boundaries who make a good deal of excellent open type features, and I suppose it’s aimed at people like this.

…my editor went absolutely spare when she “discovered” all the dots missing over the “i”'s - I rolled my “i”'s that day!

Yes, I’ve run into the same sort of thing.

There have been times when a copy editor has copied the text out of an InDesign file, pasted it into Word using a different font that didn’t have those same ligatures and then marked up the garbled results as mistakes I needed to fix.

I suppose there’s no particular reason why an average person would know about the niceties of good typography, but every writer and editor ought to know enough to have the basics down of what ligatures are and why they’re used. I think every writing, journalism and communication program at every university should require a least one course in typography appreciation, but I don’t know of any that do.

Thank you. I assumed that was the case but needed to confirm it. The free version of the script solved my problem, and if I ever delve deeper into fractions moving forward, I’ll purchase the Pro version. Thanks again!