Hey everyone, 3d artist learning graphic design here. Im new to the forum so Ill tell you a bit about myself.

I went to school to be a game designer and fell in love with 3d modeling from there. Right now I’m focusing on environment art and found that being able to produce my own graphics for assets (posters, labels, decals, etc…) would be very beneficial and make me a more versatile artist. I really hate using image textures pulled from the web and would rather have my own original art. Especially for a portfolio.

As for software, I mainly work in Blender for 3D work as my Student license expired for Maya a few years ago, and for graphics I use either Gimp for rasterized or Inkscape to make vector files. I plan on getting Illustrator in the future.

You sculpt your design in Inkscape and then colorize it in Designer.

It’s even possible to directly copy and paste vector obcjects between Inkscape and Designer, though pasting Affinity vector objects into Inkscape requires enabling copying items as SVG in Designer.

How many times do we have to go down this road.

Inkscape does not support CMYK or Pantone.
You don’t need to pair Inkscape with Affinity Designer, you can just use Affinity Designer.
Why would you do half the job in Inkscape and move it to Designer?
Copying and pasting between non-native applications is risky. I wouldn’t do it with InDesign and Illustrator and they are from the same manufacturer, why on earth would you risk copying and pasting from two different applications that interpret things differently?
And copying vecotr objects into Inkscape as SVG would remove all CMYK/Pantone references and convert to sRGB - as that is all SVG can support - it has no support for other colour models.

Do the job right the first time and you won’t have problems down the road.

@bonypoy Going Illustrator in the future would be prudent. Affinity Designer is a cheaper alternative and gets great reviews. Pari this with Affinity Photo and you have a winner. They are far more cost effective than Adobe products and a one off cost (no monthly plan).

Inkscape is a much more powerful vector editing tool that can do much more than Designer.

Sometimes I move objects from Designer to Inkscape, to tweak their shape. Then, after moving them back to Designer, I have to reapply their print colors, which isn’t a problem.

With Inkscape + Designer there’s little to no need to use Illustrator, unless you specifically need .AI files.

Well I cannot attest to your workflow - as I don’t use Inkscape or Designer. I’ll just take your word for it that you cannot do what you want to do in Designer but can do in Inkscape, whatever that is…

I still doubt you need Inkscape at all for print logos - and feel it’s a wasted step, without knowing much about the software.

And having .ai files for logos would be a must. As Illustrator is the industry standard.

It’s certainly not a good idea to open blindly files created as .eps or .pdf in an application that didn’t create them.

I’d love to say each to their own on this one - but I can’t - because it’s important for me to give accurate real life impressions.

I think it’s far too important, and that you should be handing over files to clients in the industry standard format of .ai files.

Inkscape’s vector-editing capabilities far exceed those of Designer. Affinity has a long way to go before I even consider dropping Inkscape.

Moving pure vector objects between the two apps is pretty seamless, which is very impressive, especially given the fact that they weren’t even designed to be used together. Of course, CMYK/Pantone colors have to be reapplied when moving an object from Inkscape back to Designer.

I’m not a fan of supplying clients with app-specific files. Instead, i prefer giving them universal files that can be opened and edited in a wide range of apps, be it Illustrator, Inkscape, Designer or Corel Draw.

This is interesting. Like everyone else I know in the industry, I have complicated feelings about Adobe’s dominance. Are you saying you are using your clients assets, that they paid for, to make a stand against proprietary formats? They aren’t really in a position to know if you are complicating their work by doing that. Hell, without seeing how they perform, neither am I. I’d be interested in hearing more about your thinking but this probably isn’t the thread to do that in.

Welcome bonypoy! I’d love to have your 3-D background it would come in handy while I was creating renderings for displays. Several people at our agency took a crack at learning enough 3-D to be able to make them and it just cost too much time.

i prefer giving them universal files that can be opened and edited in a wide range of apps, be it Illustrator, Inkscape, Designer or Corel Draw.

You cannot open blindly file formats in other applications. So logos saved as .eps or .pdf need to be opened in the application that created them.

this probably isn’t the thread to do that in.

Exactly.
I want to let this go but I can’t.

Opening files in other applications that it wasn’t created in is terrible.

You never open a PDF in Illusrator, for example, unless it was created in Illustrator.
Not all PDFs are equal and Illustrator is not a PDF editor or should be used like a PDF editor.

There’s only the industry standard.
And this is what should handed off to clients.

I’m somewhat sympathetic to @Jakub_Trybowski’s approach, but moving back and forth between Inkscape and Affinity Designer sounds awkward. I have Inkscape installed on my Macintosh but haven’t used it for much of anything. It tends to crash quite a bit, and since it doesn’t support CMYK, I have little use for it.

I agree with the others about the potential problems associated with opening files from one application in another as part of a routine workflow. Paying attention to industry standards is also situationally important.

However, graphic formats do exist that are standardized and non-proprietary. Inkscape saves to one of them: SVG, which the W3C developed as an open standard. Of course, there’s no guarantee that Inkscape adheres to that standard or that Adobe or Affinity honors it when opening SVG files.

The usual way to save from Affinity to Illustrator is a real hack — saving to PDF, then changing the file extension from .pdf to .ai, but it does seem to work, albeit with all the dangers that would make me shy away from it. I might do that in a pinch (just as I might extract a sponsor logo from a PDF using Illustrator in a pinch), but I’d never hand off a PDF-saved Affinity file to a client and pass it off as an Illustrator file without thoroughly checking it out for problems in Illustrator. For that matter, even then, I’d try to avoid it.

In addition, if I remember correctly, Jakub’s specialty is logo design. Logos are simple enough compositions (at least they should be) that moving back and forth between Affinity Designer and Inkscape seems unlikely to create issues beyond the CMYK limitations of Inkscape. I’d be very hesitant to use this workflow for anything more complicated, such as a brochure or complicated illustration with lots of masks, layers, transparencies, and various effects.

As for Inkscape having essential features that Affinity Designer lacks, I’m curious about what they might be since my overall impression of Affinity Designer is that it’s pretty good. Given that I can barely get Inkscape to run on my Mac, I’ve still assumed it was cobbled-together open-source junk written by an assortment of amateurs. Then again, maybe it’s improved enormously since I formed my opinions about it ten or 15 years ago.

To add to that - I’m particularly fond of @Jakub_Trybowski and I only want to help.
I do get worried when I see things that don’t tick the boxes. Having been in the industry for the best part of a quarter of a century, I am only trying to help improve the workflow. And most of all, give the client files they can use. As it’s dealing with clients, I’d be inclined to stick to industry standard formats.

The most worrying thing about EPS workflows is that they don’t support ICC Profiles.
EPS files are pretty flat.
And PDFs should be final formats - not editing formats.
Leaves the client with an Affinity/Inkscape matchup native file - which if needs editing would need to be reworked in Illustrator - as the client would be dealing with Industry standard printers.

The SVG thing is not really a concern, it’s a web format.

I like Jakub a lot, and I truly hope I’m helping to understand the issues with the workflow.

Is it a massive deal when working by yourself

I hope it comes across well.

As a result I get a nice set of flat, ICC-profiled (when applicable) logo files, free from any Inkscape/Designer-specific elements.

You can see the whole process here: 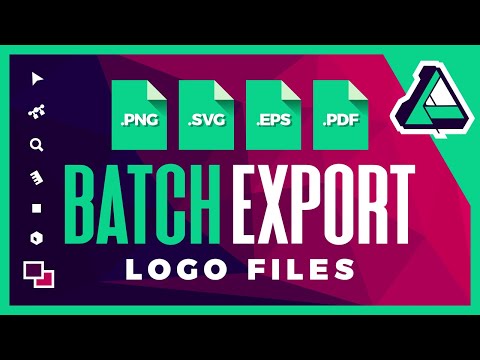 Additionaly, each client gets a simple Pantone color palette: