I found a client! woot. He has these headshots he wanted to be edited. After 4 hours of work, these 5 headshots are ready to be submitted.

He wanted then breast length up, which wasn’t possible on 3 photos as the source files were only shouldered up. Hence…drawing their bodies in? How did I do with my photoshop? 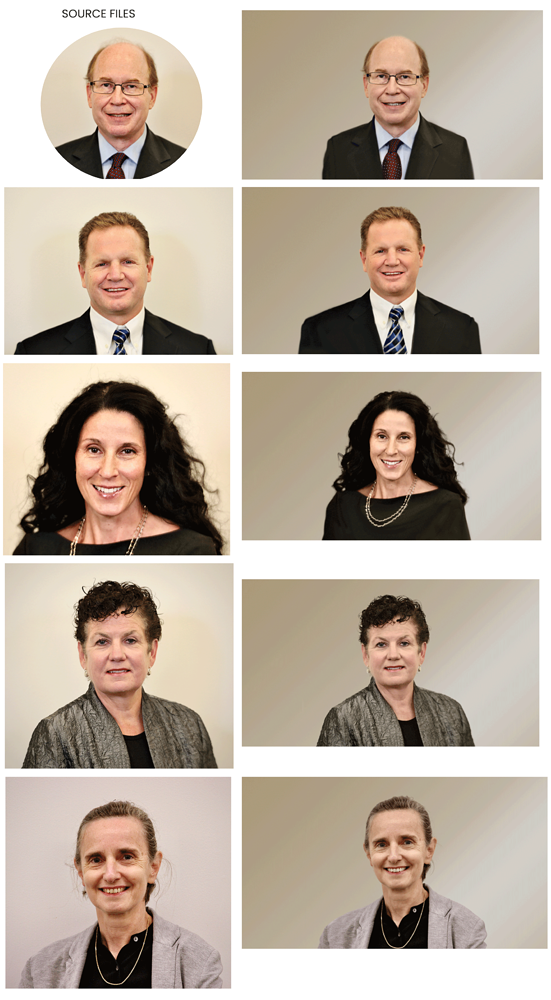 Hope your client is ok with these posted here.

He doesn’t know, I suppose if that’s not right the topic can be deleted.

This is a high visibility site. It could turn up on searches easily and then you might not have a client any longer. It’s happened to a few members on here in the past.

We have always cautioned folks to be careful when posting actual work. You won’t see many of the well seasoned designers posting their work here in the Crit Pit.

Just a bit of advice.

I gotcha.
Well, I wouldn’t say I’m a well seasoned designer. I only have about 3-4 years of experience.

That may be so, but it’ll be a shame if you’re a “less well seasoned designer” with one less client.

The first person’s shoulders width is too small for their head. The guy below him has much wider shoulders. I’m not saying it should match the other guy’s, but proportionally the first guy is off.

The top guy’s shoulders look quite narrow — especially when compared to the guy below him. Most everything else looks quite good, though.

The chances of your client stumbling on something their photos here seems small. If you’d mentioned a name, it would have come up in a Google search. With a photos, though, it’s much less likely. Even so, if it were me, I wouldn’t compromise a client’s confidentiality by posting their photos on the internet without their permission.

Edit: @CraigB beat me by a couple of seconds.

I ended up widening the first guys shoulders.
Im expecting these to be mostly used on a circle mask so I wasn’t entirely worried about painting something that wasn’t going to exist if I didn’t have to help it.