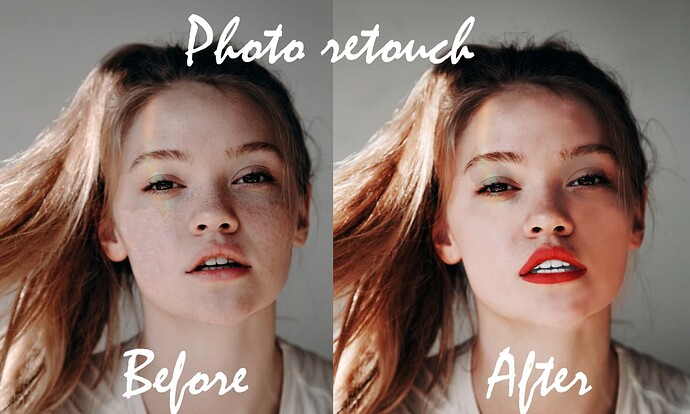 What is it for? Need more context for a valuable critique.

You’ve removed her freckles. Whether this was good or bad might depend on the retouch’s intent.

The photo is of a casual girl in casual clothes with disheveled hair. Yet, you’ve given her bright red lipstick that is not in keeping with the informal nature of the situation.

A distracting rainbow extends down from her hairline through her right eye. You didn’t remove this rainbow, even though it’s an obvious flaw.

You could have improved the definition between her jawline and neck.

You’ve increased the photo’s contrast, which reduced the flatness of the original. However, you’ve done it at the expense of blowing out and filling in some of the detail.

Is that supposed to be eye shadow?

Thanks for your feedback : )

Even when trying to get a glamourised, ‘painted’ look, you still need to keep it believable. The lipstick is too opaque and overpainted, the teeth, too white, etc. it looks what it is. Retouching needs go unnoticed. If you can see it has been done, it’s been done badly.

By removing the freckles (which is a shame) you have flattened her cheek.

Everyone has given you good feedback.

Thanks for your feedback : )

There’s actually an ad campaign running in our country that addresses how young people want to be seen online.

Rather than being their natural looking selves young people are using apps to make themselves ‘prettier’ and look older than that are.

Leads to all sorts of behavioral and social issues. And the confidence to be just themselves and look natural.

The amount of kids who have aneorixa due to seeing models online who you can see through… And young people think this is something to aim for.

I don’t condone this type of photo manipulation.
It’s not natural.

And that’s what it is, it’s not retouching.
It’s manipulation.

And if you think this looks good there’s something wrong with you.

Since you have another thread about earning a living as a photo retoucher, I won’t be doing you any service by pulling punches here. The work shown is not up to a pro level for this type of thing. Compare what you’ve done to what you see in fashion magazines or modeling agencies. I think you’ll see the difference.

I find it alarming, it looks like you sexualizing a 12 year old girl. And it’s pretty stomach turning.

I’m ONE THOUSAND percent with you!

FYI … that is a 24 yr old professional model that goes by Marissa Grace.

Everyone’s moral convictions aside, the OP only wanted to know if they did a good job. I think that’s been answered.

Before I get into criticisms of photo manipulation, I get hired a lot lately for this sort of thing —for example, this recent playbill cover for a local high school theater production. It’s all pieced together from a bunch of separate photos of the student actors and a stock background. 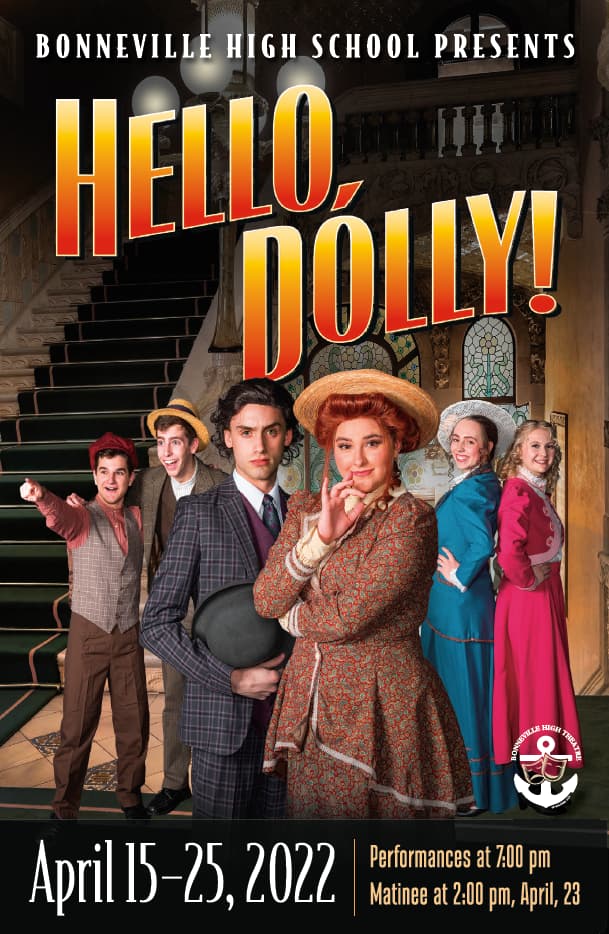 On one hand, creating photo illustrations like this one seems fine to me. Everyone understands they’re illustrations or carefully composed pretend photos. No one is deceived.

I also think it’s OK, depending on the situation, to remove blemishes, change the color of automobiles, remove powerlines from advertising photos, and make other similar alterations that could be achieved through make-up, a better photographer, or better lighting on a different day.

On the other hand, I’m adamantly opposed to sexualizing a 12-year-old or making a 24-year-old look 12 years old to skirt around the issue. Both are creepy.

I’m also opposed to most cosmetic, personal care, or food advertising where photo retouching furthers unrealistic stereotypes of beauty or makes fast-food sandwiches appear vastly better than they really are.

I spent 15 years at a newspaper where manipulating photos beyond adjusting contrast or dodging and burning was verboten and grounds for dismissal. Believability in news photos depends on honest photography.

What is it for? Need more context for a valuable critique.

Yes, exactly. Photo retouching can’t be judged solely on how well the image was altered or how beautiful the end product might be. Just like graphic design, much depends on the context, the end goal, and whether or not, in my opinion, it falls within the fuzzy ethical guidelines surrounding the bigger issue.