Do printers have tools to fix Total Ink Coverage?

I’m assembling a magazine and ads are coming in from the publisher’s other contracted designers. I ask for corrections to the tic, and it seems like no one knows what I’m talking about. And some of these people have been around awhile. I’m wondering if they’ve never encountered this request before because printers are either printing as is, or are making the corrections.

In your experience, how do printers respond when they receive pdfs and the ink coverage is too high? Do they send the files back for redesign, do they print as is, do they have tools that make the corrections and fix it without telling the designer?

I’ve always relied on the printer for under color removal (UCR) / gray component replacement (GCR) which, to the best of my understanding, would take care of the total ink coverage issue. The perennial advice, of course, is to check with the printer beforehand.

How most printers deal with TIC, I don’t know, since it’s been rare for a printer to mention to me what they want the TIC to be. I’ve always assumed they change it to what’s needed or just print what I send them.

I have, however, worked with printers who have specified the TIC. IngramSpark (on-demand book printer), for example, insists on an unusually low coverage. I’ve also worked with magazine publishers who have provided specific instructions regarding all kinds of things — ink coverage being one of them.

This is one of those cryptic mystery areas for most designers, so my hunch is that most printers don’t try to engage designers with it, and either just print what they get or change the TIC during prepress.

By the way, it’s possible to change the TIC settings in Arcrobat. It’s been about a year since I’ve needed to use Acrobat for this purpose, so I don’t remember the exact procedure. If you’re supplying a PDF to a printer that’s requested a specific total ink coverage, this might be the best way to bring all the ads in line with your TIC requirements.

Our color management would correct on the fly. It depends on the stock but our curves are set to make sure that anything over 320 total is lowered to that, it goes down to 280 max Density when running on uncoated stock. We are using Large offset UV presses so some conventional ink printers might be lower but it should correct itself on the fly or at least they should be preflighting for that.

I remember twenty years ago having to do gcr and ucr, but I haven’t come across it in years.

Most rips would handle that.

Colour critical I’d do it and get proofs from printer.

Other than that the rip is going to reduce the tic and you have no control on that. But if it’s basic stock, office photography, or supplied digital images etc that are not colour critical then I wouldn’t bother.

Colour had to be perfect.

Printers fix TIC using UCR and GCR. This is the prepress phase required for print ready files. If this was not included in the original negotiation for the printing then there will be an additional charge. Hopefully somebody is on the press check, especially if this a glossy mag where images are critical to the aesthetic.

Step 2: color settings. Go to edit > color settings or use the key combination Shift + Ctrl + k. …
In Adobe Photoshop you can set a customized maximum ink coverage. This way you can prevent too much ink. You can also use it to reduce ink coverage in all places with excessive ink coverage.

Or dont bother doing any of that and let the printer decide.

If you reduce tic to 280 and next print you need 320 are you keeping different tic files? Or a different stock, say business cards vs letterheads?

Seems like a waste of time when it can be done after the creation of the print files , or during.

Don’t do this.
Besides the facts that 1. Photoshop is not usually the output mode of choice for printers and 2. CMYK is not always the correct color mode and 3. I deal everyday with a print process that uses absolutely no ink so TIC is moot (but not Zero)

You have absolutely no idea what the TIC should be for anything other than maybe the very few materials you happen to know it for. Printers deal with this based on the machine, inkset and media. Too many variables out there for a designer to do it (considering most designers have only the most rudimentary understanding of color theory to begin with.)

Not only this - but you have to decide how much CMYK to remove - and which channels are you removing? Or you taking from CMY and adding a bit back to the K so you have a good gray balance?

This really is the work of a prepress technician. It’s not really a good idea to tinker with something like this - what if you make it too orange or too yellow.
You’re messing with supplied photos - and if that goes wrong it’s on you!
If the printer messes it up - it’s on them.

It seems you copied what you wrote from this website: How do I check and change the ink coverage? | PrintSimple

Anyway, I agree with the others; total ink coverage is not typically something to worry about (usually). However, familiarizing oneself with ink coverage issues is a good idea. The more a designer knows about printing, the better off that designer will be in making decisions that take printing capabilities and limitations into consideration.

I’ve known designers who naively specified rich black as 100% of all the process colors, which is the recipe for a muddy mess and leaves the printer in the position of deciding what that rich black should be. In addition, you can’t count on printers necessarily fixing things. Gang printers, for example, don’t get too involved in ensuring that all the various colors from each job on the press are ideally separated.

Acrobat lets designers check and change total ink coverage in PDFs. Acrobat has a Print Production button that heads to an area where there’s an Output Preview button.

The Acrobat screen capture attachment shows the cover of an InDesign booklet I recently completed that shows all the areas in bright green where the ink coverage exceeds 280%.

As mentioned, the printer would almost certainly scale this back for me, but knowing some areas were too dark, allowed me to cut back some of the denser areas without needing to hand off the problem for the printer to fix and hoping that it looks right.

Acrobat, by the way, also provides a means to readjust those separation densities across the entire PDF before sending it off to a printer. Whether or not to do this, of course, depends on the job, knowing the printer’s recommended maximum TIC, and whether or not it’s an appropriate thing to do for the job at hand.

As I mentioned earlier, the on-demand book publisher, IngramSpark, specifically recommends sending files with a maximum TIC of (can’t remember for sure) around 240%. Having printers specifically request this is a rarity, but it’s a good thing for every designer to know about. 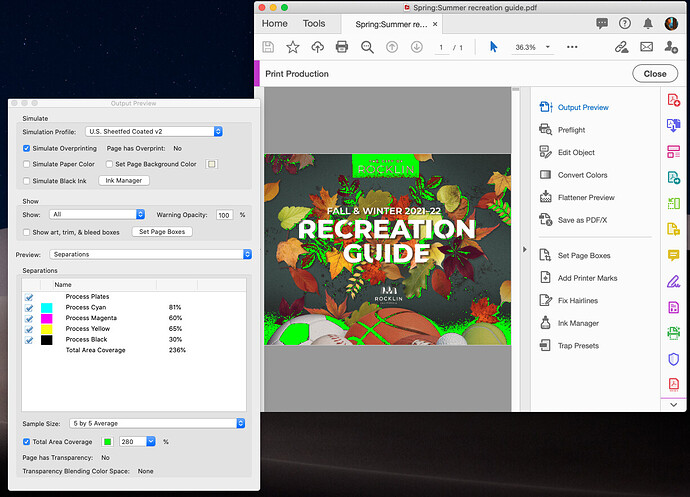 Used to do it all the time in prepress. Haven’t touched anything like that in years. Typically I expect prepress to fix this, or at least at the rip.

There are some printers that do spec it. But I wouldn’t be using these types of printers.

There are some printers that do spec it. But I wouldn’t be using these types of printers.

These days, it seems that over half my clients prefer to handle working with the printing company themselves for various reasons — some legitimate and some misguided. Anyway, it often leaves me in the position of preparing the files for the lowest common denominator and hoping for the best.